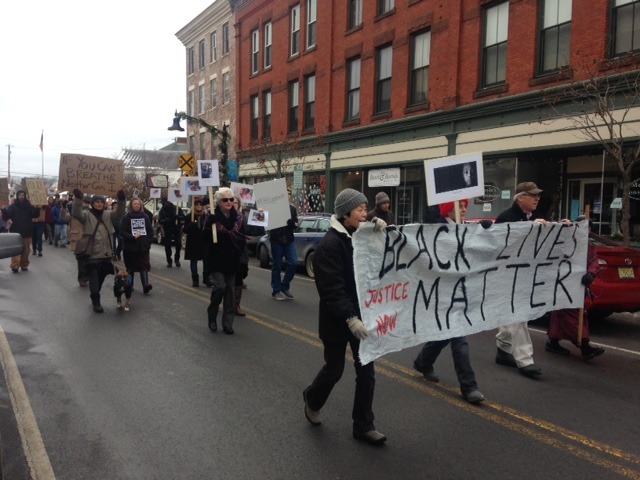 Marchers head up Main Street in Chatham Sunday, December 14, one of many such protests nationwide over the weekend in response to recent deaths of unarmed black males caused by police. Photo by Parry Teasdale

CHATHAM–Over 50 people gathered in Chatham village Sunday, December 14, convening first at the gazebo on the green and then marching down the center of Main Street to protest the recent deaths in New York City, Cleveland and Ferguson, MO, of unarmed black men and a boy as the result of force used by police.

Barbara Iuevene, one of the speakers, said that racism was “intrinsic in our society” and that combating it called for local as well as national efforts. “This is something that’s got to be done city by city and town by town,” she said.

Neil Smith, one of the organizers of the Chatham event, spoke about the history of discrimination in the U.S. and called for the economic system to change along with attitudes. Referring to Mr. Garner, a father of six who died when he was subdued by police who alleged he was selling untaxed cigarettes, Mr. Smith said a distorted economy had played a role his death. He said with a fairer economic system, “Eric Garner would not have been out on the street trying to supplement his income.”

Rev. Drew Paton of St. Peter’s Presbyterian Church in Spencertown, addressed whites who made up the majority of those at the event, saying, “White people: We have a lot of work to do.”

Deirdre Grant, who said she is a member of the North Chatham Methodist Church, spoke of all the positive interactions she and her family have had with white residents in Chatham, but she and other black speakers said that racist stereotypes about young black men persist and lead to unfounded charges and incidents based solely on the color of a young man’s skin.

A speaker who did not identify himself said that when he meets whites he can see in their eyes whether they perceive him as another person or as something different. It’s when white’s treat him differently that he becomes aware that he’s black because, “I can’t see this,” he said, pointing to the skin on his hand.

When the speakers concluded the marchers, a mix of all ages including children, proceeded down Main Street and through other parts of the village. Though they blocked both lanes traffic at the beginning, there were no police evident.

This weekend national news organizations reported that tens of thousands of people turned out in major cities around the country, including New York, Washington, DC, and Boston for rallies protesting the killings of these and other black men by police and the lack of trials to determine responsibility.