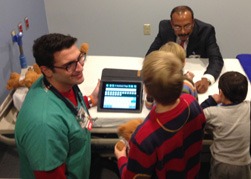 At the gathering to launch the new pediatric room at the Columbia Memorial Hospital Emergency Department in Hudson, Frank Saladino, RN, introduces some youngsters to iPad apps intended to help kids with autism spectrum disorders communicate with caregivers in case of a medical emergency. Across the bed is Dr. Arun Nandi, director of the department. The new room opened this week. Photo by Parry Teasdale.

HUDSON–The walls of the small room at the edge of the Columbia Memorial Hospital Emergency Department are painted a calming blue. So is the face of the blood pressure gauge above the single child-size bed. There are drawers full of squishy toys and brightly colored, weighted  blankets.

Unlike the nearby emergency cubicles defined by curtains and bathed in florescent light, this room is designed to be as unthreatening as possible to children with autism spectrum disorders or other conditions that cause verbal impairments. It opened this week with the press and guests–some of  them kids on the spectrum–invited to see the place. Those present were also introduced to an important feature of the service not readily apparent except on an iPad running digital applications–apps–designed to help caregivers and this special group of patients find pathways to communicate.

“The emergency room is a scary place for children across the autism spectrum,” Dr. Arun Nandi, director of the CMH Emergency Department, said in brief remarks before the tour Monday, December 15. He said the room makes it possible to filter out some of the noisy activity that autistic children find particularly frightening and disorienting. The tactile process of rearranging images on an iPad screen offers these kids a way to understand where they are and what’s likely to happen, providing them a non-verbal way to respond.

The hospital says the autism-specific apps help medical providers learn the reason why a patient has arrived for care, the patient’s pain and discomfort level, and his or her communication preferences. A release from CMH says the apps also help staff alleviate fear and confusion by better explaining what the patient can expect during their visit.

The $80,000 needed to design and equip the room and develop some of the apps came from donations raised at Columbia Memorial’s annual Hospital Ball charity event in June. Hospital officials said the new autism-friendly emergency care services are a partnership between Columbia Memorial, its charitable foundation and Emergency Medical Associates, an independent company in New Jersey that partners with CMH and other hospitals throughout the Northeast to help manage emergency and urgent care services.

The new service at CMH is the first of its kind in the Capital Region, according to the hospital. Kingston Hospital has a similar facility, also created in conjunction with Emergency Medical Associates. “Our new room gives families a quiet place where they can use special tools to improve communication with doctors and nurses,” Dr. Nandi said in the release.
The new room may also be used for any medical emergency involving a child. And the iPad apps, which can access the digital services throughout the department, might also assist adults with autism spectrum disorders. “Portability is one of its greatest assets,” Dr. Nandi said Monday.

Scott Serbin, who is developing the apps for the project, said that the program would also include web based training for staff.
The CMH Emergency Department handles about 34,000 patient visits annually. Dr. Nandi did not know the number of children the hospital currently treats who has disabilities on the autism spectrum or have other verbal impairments, but he said that the number of children nationwide is large and growing.

The federal Centers for Disease Control and Prevention reports that “about 1 in
68 children has been identified with autism spectrum disorder,” although the agency cautions that the number is only for children at age 8 and is not representative of the prevalence of the disability nationwide. More information is at www.cdc.gov.

Jay P. Cahalan, president and CEO of the hospital recognized the  CMH supporters in both Columbia and Greene counties, adding that their donations “will provide funds for maintenance and equipment upgrades in the coming years. We believe this treatment room will have great value to our youngest patients today and well into the future.”