SALT POINT—The recent saga of on-the-run prison escapees David Sweat and Richard Matt was out of The Columbia Paper’s news coverage area. But the involvement of three local Troop K State Police members in tracking down the convicted murderers brings the story closer to home.

Trooper Steven Hobson and his two female bloodhound partners, Darby, 7, and Wiltsie, 2, were among the K-9 (canine) units from across the state deployed to points north to hunt for the duo who sawed their way to freedom from the maximum security Clinton Correctional Facility in Dannemora June 6 and eluded capture for three weeks.

These distinctive loose, wrinkly-skinned dogs with long ears have a discriminating sense of smell and can track and identify an individual from among a group of people. It is believed that the dogs’ dangling ears and skin flaps actually aid in stirring up and capturing scents.

German shepherds are used for multiple purposes such as narcotics and explosives detection, building and cadaver searches, along with handler protection.

In Troop K, which covers Columbia, Dutchess, Putnam and Westchester counties, there are currently 10 K-9 units, eight of them are German shepherds and two are bloodhounds. In all cases, the dogs live with their handlers.

Whether a handler works with a male or female dog comes down to his or her preference, said Tr. Hobson, noting “females are less distracted.”

Tr. Hobson and the bloodhounds were stationed about three and a half hours away from home for the duration of the mission.

He and the bloodhounds were part of the escapee investigation daily and were “used a lot throughout a big geographic area,” said Tr. Hobson.

Though he would not give specifics about the investigation, he described it this way, “We were deployed successfully.”

In the end Mr. Matt, who was armed with a shotgun, was shot and killed June 26. Two days later, Mr. Sweat was shot twice and wounded when he ran from police after being spotted along a rural road not far from the Canadian border.

In 1975, the New York State Police created the Division Canine Unit and selected three troopers to receive the specialized training to become canine handlers, according to the http://troopers.ny.gov/specialized_services/Canine_Unit/ website. 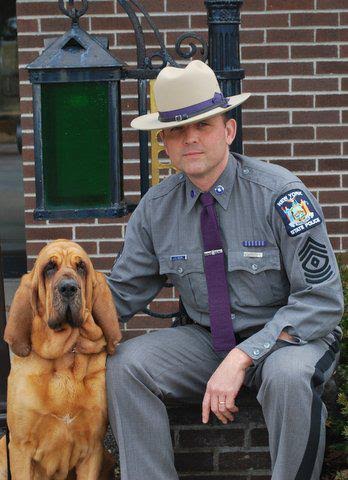