GREENPORT—Jamie M. Anuska, 39, of Greenport was charged with second degree assault, a class D felony, and fourth degree criminal possession of a weapon, a class A misdemeanor, by State Police from the Livingston barracks January 25.

Troopers were dispatched by Columbia County 911 to a disturbance at a Greenport residence. Their investigation revealed that Ms. Anuska allegedly stabbed the victim in the arm with a pocketknife and fled the scene. She returned several minutes later and was placed in custody.

The victim was transported to Columbia Memorial Hospital by Greenport Rescue Squad with non-life threatening injuries.
Ms. Anuska was arraigned in Livingston Court and sent to the Columbia County Jail in lieu of $20,000 cash bail or $40,000 bond.

Claverack
Michael R. Sherman, 26, of Philmont was charged with third degree menacing and third degree criminal mischief by State Police from Livingston, January 20.
Troopers had received a report of a disorderly subject.

Their investigation revealed that Mr. Sherman had been involved in a dispute during which he allegedly chased the victim down the street and allegedly intentionally broke the windshield of a parked vehicle.

Troopers responded to a 911 call about a hit and run accident. Mr. O’Leary, who was the driver of a 2007 Dodge Ram, struck a tractor-trailer and fled the scene.

A witness contacted 911 reporting the incident and began to follow the Dodge Ram. When Mr. O’Leary realized he was being followed, he allegedly engaged in road rage behavior and intentionally struck the witness’ vehicle. The Dodge sustained significant damage and became disabled.

Troopers arrived on scene and interviewed Mr. O’Leary and found him to be intoxicated. He was taken to SP Albany where his blood alcohol content was determined to be 0.28%.
He was arraigned in Chatham Court and sent to the Columbia County Jail in lieu of $1,000 cash bail. All parties involved were uninjured.

Kinderhook
Kaitlyn R. Wright, 26, of Valatie was charged with driving while intoxicated, a misdemeanor, by State Police from the New Lebanon barracks, January 17.

Ms. Wright was stopped on State Route 9 for speeding and failing to keep right. Following an investigation by the arresting trooper, Ms. Wright was found to be intoxicated at the time of the stop.
She was issued traffic tickets directing her to appear in Kinderhook Town Court, February 2.

The felony charge stems from a traffic stop conducted just after 10 p.m. January 20 on 14 South Seventh Street, by a State Police K-9 patrol. The trooper stopped the vehicle and conducted a traffic stop after observing several traffic infractions. Hudson Police responded to the scene. Ms. Hoffman was found to be in possession of more than a half ounce of powder cocaine.
Ms. Hoffman was arraigned before Judge John Connor in Hudson City Court and sent to the Columbia County Jail in lieu of $10,000 cash bail or bond. She is scheduled to return to Hudson City Court at a later date.

“More drugs off the street in the City of Hudson. It’s amazing these people don’t get the message, but we’ll continue to hammer it home. This arrest also shows our continued relationship with other agencies, this time being the NYS Police,” Hudson Police Commissioner Gary Graziano said in a press release.

Copake
Jaime A. Jimenez-Gordillo, 50, of Norwalk, CT, was charged as a fugitive from justice by Deputy Joseph Kilmer and K9 Deputy Travis VanAlstyne January 17 at 7:08 p.m. Deputies stopped Mr. Jimenez-Gordillo on State Route 22 for a traffic infraction. They found he was wanted in Miami, Dade County, FL, on a sexual battery charge. He was arraigned in Copake Court and sent to the Columbia County Jail without bail to await extradition proceedings.

Stockport
Jeffrey C. Hoyt, 25, of Hudson and Ronald D. Hoyt, Jr., 33, of Latham were each charged with petit larceny, a class A misdemeanor, by K9 Deputy Travis VanAlstyne, January 10 at 6:49 p.m.
Both defendants are accused of being on private property in Stockport and stealing property consisting of a wild game camera that was set up in the woods.
Both men were issued appearance tickets returnable in Stockport Court at a later date. 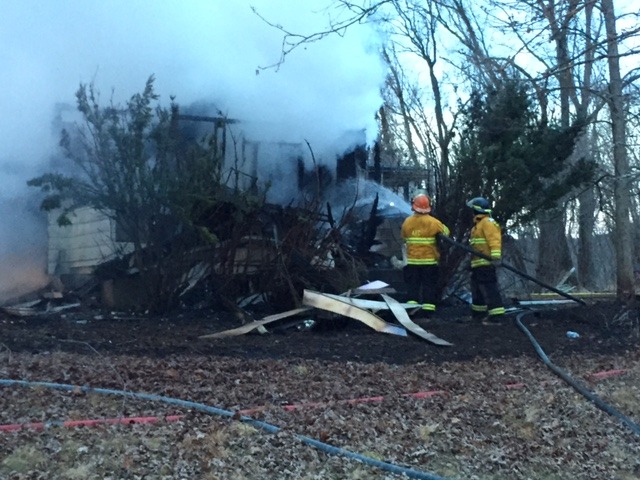 Blaze breaks out in Ancram. Ancram, Taghkanic, Copake and Hillsdale firefighters were called out at 6:02 a.m. Wednesday, January 27 for a structure fire at 112 Poole Hill Road, Ancram. The fire was close to home for Ancram Fire Chief David Boice, who lives almost next door, according to newsman Lance Wheeler, who was on the scene. The chief said he heard a loud noise and thought it was an accident. A passing motorist saw the flames and stopped at the chief’s house. Mr. Boice reported the blaze, then started to fight it. County 911 summoned the Community Rescue Squad, the County Cause and Origin Team and Central Hudson to the scene. Columbia County Fire Coordinator’s Office was also there and firefighters cleared the scene at 12:29 p.m. Photo by Lance Wheeler