GERMANTOWN—Two seats are open in this year’s election for Board of Education of the Germantown Central School District, and district voters can choose from among three candidates.

Faydra Geraghty, who serves this year as vice-president of the board, declined to run for a second four-year term.

Ralph DelPozzo, at the end of his third term, is running again. The other two candidates are Lester Olsson and George Sharpe Sr. Mr. DelPozzo, 80, is a graduate of the Germantown Central School. His five children graduated from GCS and now his five grandchildren attend the school. Michael DelPozzo his son, teaches art in the elementary school, and Nancy DelPozzo, his wife, is a teacher’s assistant in the junior/senior high school.

Mr. DelPozzo is the proprietor of Ralph’s Country Realty & Appraisals, an agency he has run for 30 years. He is also assessor for the Town of Germantown, a position he has held for 15 years.

These last 12 years have been Mr. DelPozzo’s second stint on the school board. He served previously many years ago, until he was elected town justice and could not hold the two posts simultaneously. After 20 years as town justice, he successfully ran again for the Board of Education.

His continuing service on the board, says Mr. DelPozzo, is “for the kids. I love children, my own and others’, and I want what’s best for them.”

And, he says, “I always think of the taxpayers, especially the senior citizens. As assessor I help them with their applications for the STAR Program assessment reduction, and I hear their concerns, even as they support the school. Just because you’re old, doesn’t mean you don’t love children.

“Our goal right now,” Mr. DelPozzo said of the board, “is to see the addition completed and to keep our graduation rate high, which it is, thank heavens. Superintendent Susan Brown, the PTSA and the Booster Club are all doing wonderful jobs. Mr. Olsson, 50, graduated from Red Hook High School. After spending his 20s working on farms and building houses, he earned an AAS degree in electronic technology at Columbia-Greene Community College, and went to work for IBM in IT security.

Mr. Olsson and his wife, Emi Kondo Olsson, met at IBM. After their daughter was born, “we realized that we didn’t both need to keep working,” he said. “She liked her job better than I liked mine, so we made the decision, 11 years ago, that I would be a stay-at-home dad.”

The Olssons have lived in Germantown for 13 years. Mina, 12, is in the sixth grade at GCS, and Kian, 7, is in the second grade. The children’s names are “Japanese names that are easy to pronounce,” Mr. Olsson explained. Ms. Olsson is Japanese American.

Mr. Olsson is vice president of the Board of Trustees of the Germantown Library. He has coached children’s basketball and is now coaching his son’s Little League team. Ms. Olsson is president of Odyssey of the Mind, an after-school program that builds teamwork and creative decision-making. Both of their children participate in it.

Mr. Olsson is interested in running for the school board “for a couple of reasons,” he said. “My wife and I have a great life, and I felt a strong need to give back. We lived in Singapore for over two years, and when you live in another country, that makes you feel like you want to get involved at home.

“Also, I want to set an example for our children, that it’s important to get involved in your community. Don’t just complain about things on Facebook, get involved and change things.”

As a school board member, Mr. Olsson says he would work toward completing the new auditorium and to increase the membership of the PTSA. He and Ms. Olsson are members, and “we’re always starving for volunteers.”

Mr. Olsson would serve well on the BOE, he says, “because of my background. I went from doing manual labor and having no money in my 20s to a white-collar job at IBM. I bring a large perspective to the table. I can see issues from many different points of view.” 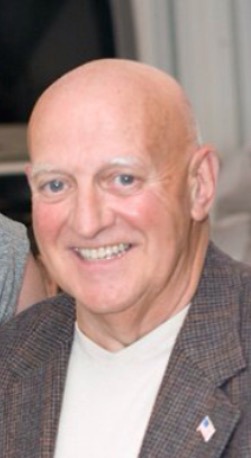 Mr. Sharpe, 69, graduated from GCS and went on to Dutchess Community College and SUNY Albany. He taught business and marketing at Catskill High School for 33 years.

During that time, he also worked for Germantown. He started in 1969 as a part-time police officer. In 1973 he took a seat on the Town Board and also began serving as a town justice.

He became supervisor in 1978. In 1980 New York State forbade the dual roles, and Mr. Sharpe left the justice position. He served as supervisor until 2001. Currently, he serves on the Planning Board, chairs the town’s Republican Committee and, along with his son, George Sharpe Jr., is a member of Germantown Hose Co. #1.

As a board member, said Mr. Sharpe, he would fight for additional state aid for the district. He would also seek grants and donations for the district, as he did successfully, he says, as town supervisor. “I constructed 26 budgets for the town, and while I was supervisor, we built six buildings in town, some with grants, others with donations from families and businesses.”

“I don’t see where kids learn through testing. Take Odyssey of the Mind,” he said. “It doesn’t test kids, it gives them a problem to solve and makes them think creatively. That’s what I want to see in the classroom.

“Kids have to take tests in school,” he said, “but Common Core feels like ‘gotcha.’ I like the way Odyssey operates.”