CLAVERACK—Three people were hurt in a three-vehicle crash at the intersection of routes 9H and 66, September 7 at 1:45 p.m.

State Police report that James E. Buckley, 73, of Chatham was traveling southbound on State Route 9H, when he failed to stop at a red light at the intersection of routes 9H and 66.

The Buckley vehicle traveled through the intersection and crossed into the northbound lane of Route 9H where it struck a vehicle operated by Adrienne Lustiber, 82, of Saratoga Springs, who was stopped in traffic.
Mr. Buckley then continued south and struck the vehicle directly behind Ms. Lustiber, which was operated by Catherine Sardo, 22, of Ghent.
The front wheel of the Buckley vehicle became detached and subsequently struck the windshield of the Sardo vehicle.
The Buckley vehicle continued past the Sardo vehicle, travelled back into southbound lane, struck a curb on the west shoulder, overturned and came to rest on the west shoulder facing northwest.
Ms. Lustiber was transported via LifeNet helicopter to Albany Medical Center with serious injuries that at this time are not believed to be life-threatening.
The other drivers were transported by ambulance to AMC where they were treated and later released.

The roadway was re-opened at about 6:30 p.m. that evening.
West Ghent firefighters with mutual aid from Claverack and Stottville; along with Greenport Rescue and squads from Valatie and Chatham were all on the scene.

Columbia County 911 dispatched troopers to a one-car motor vehicle collision on County Route 7. Troopers arrived on scene and interviewed the driver, Mr. Lane. A subsequent investigation revealed that he was intoxicated at the time of the crash.

Mr. Lane was charged with felony DWI when a criminal history revealed a prior DWI-related conviction in 2011. He was additionally charged with first degree AUO because he was operating the motor vehicle with revoked driving privileges.

He supplied a breath sample that revealed a blood alcohol content of .21%, more than two times the legal limit. He was arraigned in Gallatin Court and released on his own recognizance. He was scheduled to return court at a later date.

Brian M. Kormos, 25, of Stephentown was charged with aggravated driving while intoxicated, a class U misdemeanor; leaving the scene of a property damage accident, failure to use designated lane, unsafe tires and uninspected motor vehicle, all traffic infractions, by K9 Deputy Travis VanAlstyne and Deputy Thomas Merante August 22 at 7:13 p.m.

Mr. Kormos is accused of operating a motor vehicle in an intoxicated condition on State Route 22 in New Lebanon, driving off the roadway striking a tree.

He allegedly attempted to hide from law enforcement in the wood line near the accident scene.

He was taken into custody and a breathalyzer test yielded a .19% blood alcohol content. He was arraigned in New Lebanon Court and released on his own recognizance. He is scheduled to return to court next month.

Zafir Dissou, 23, of Pittsfield, MA, was traveling east on State Route 20 when the driver failed to see a vehicle operated by Cody Ames, 23, of Stephentown, which was stopped in the eastbound lane due to traffic for an event at the Lebanon Valley Speedway.

After the Dissou vehicle rear-ended the Ames vehicle, it then struck a third vehicle, operated by Michelle Karsten, 34, of Lee, MA.

The Chatham Rescue Squad took both Mr. Dissou and Mr. Ames to Berkshire Medical Center for treatment of their injuries. No one in the Karsten vehicle reported being injured.

State Police issued traffic tickets for speeding and unlicensed operation to Mr. Dissou. Lebanon Valley firefighters were clear from the scene at 12:08 a.m.

David R. Minkler, 51, of Stockport was charged with fourth degree criminal mischief, a class A misdemeanor, by Deputies Thomas Merante and Zachary Sohotra September 2 at 4:06 p.m.

Mr. Minkler allegedly left the McDonald’s in Greenport and damaged a glass door at that establishment. He was issued an appearance ticket returnable in Greenport Court at a later date.

David M. Risch, 24, of Chatham was charged with second degree criminal contempt, a class A misdemeanor, by Deputies Joseph Kilmer and Zachary Sohotra September 6 at 7:07 p.m.

Mr. Risch allegedly violated an order of protection. He was arraigned in Chatham Village Court and sent to the Columbia County Jail in lieu of $500 bail. He will appear back in court in October.

Major Nuzzo began his career with the State Police in 1987 as a trooper assigned to Troop K and transferred to Troop F the following year. He served as a trooper in Ulster County until his promotion to sergeant in 1994 and remained in Troop F. In 2001, he was promoted to lieutenant and assigned to Troop L in charge of security for the 2002 US Open Golf Championship.

In addition to the U.S. Open Golf Championship, Maj. Nuzzo held supervisory roles at the Woodstock 1994 and 1999 music festivals and was part of the New York State Police Response Detail assigned to Louisiana after Hurricane Katrina in 2005.

Maj. Nuzzo’s appointment as Troop K commander was effective August 25. He replaces Major Robin H. Benziger who will go on to serve the Division of State Police in the Office of Employee Relations. 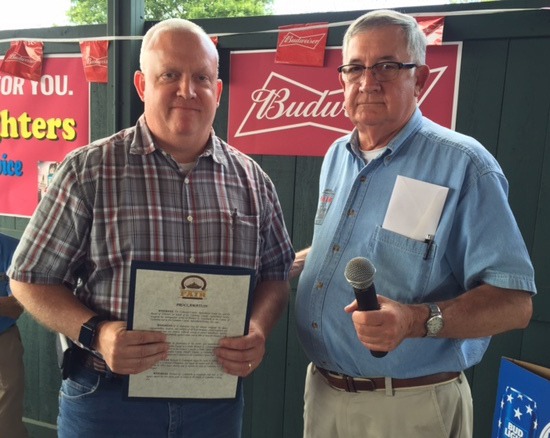 Lindmark retires after 32 years. Richard Lindmark, (l), who has announced the Columbia County Fair’s annual Firefighters’ Parade for decades, receives a proclamation and plaque from Columbia County Agricultural Society President Nelson Alford, Jr., saluting his retirement after 32 years as a dispatcher with the Columbia County 911 Center. The presentation was made following the parade Saturday, September 3 before a crowd of firefighters and other first responders who have come to know him as “the voice of Columbia County.” The Agricultural Society Board voted to make Mr. Lindmark a life-member of the society. He will continue to announce the fair parade each year. Photo contributed 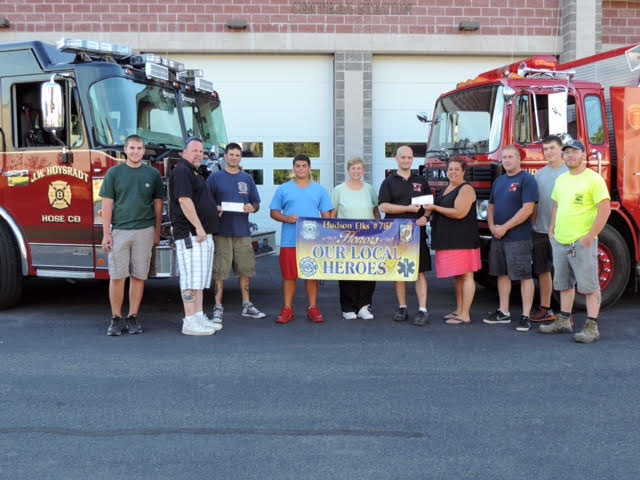