At about 1:06 p.m. Hudson detectives found Mr. Cross sitting in his vehicle on North Fifth Street. He was arrested without incident.

The charges stem from a Hudson woman’s complaint when she discovered large sums of money missing from one of her checking accounts. She showed police documentation that more than $3,000 was removed from her account via a debit card.

Hudson Police were joined by State Police investigators because various transactions occurred outside the city. The number of transactions and total amount of money stolen is still under investigation and other charges are pending.

According to a press release from Hudson Police, Mr. Cross was listed September 15 on the Staley B. Keith Social Justice Center website as the executive director. Former Executive Director Cederic Fulton was arrested February 3 for stabbing another individual with a knife after an argument spilled onto State Street.

Mr. Cross, a former majority leader of the Common Council, was arraigned before City Court Judge John Connors and sent to the Columbia County Jail in lieu of $3,500 dollars bail.

“This is a pretty straight forward case. We are preparing for trial. Our victim claims under no circumstances did this individual have any permission, expressed or implied, to use her ATM card,” Hudson Police Chief L. Edward Moore said in the release.

*Tuesday, September 13 at about 9:54 p.m. Hudson Police responded to a report of a man “going through vehicles” on the 800 block of Warren Street.

Police say Mr. Brown has convictions for larceny and drug possession. He was allegedly in possession of a crack pipe. He was sent to the county jail by Hudson City Court Judge John Connors and is due back in court at later date.

“I am glad we made this arrest. Lately, we have received all sorts of complaints of this nature. I am sure many have gone unreported. This incident has significant interest to many of our residents,” Police Chief L. Edward Moore said in a press release.

State Police from the Livingston barracks charged Nicholas Palermo, 37, and Brittney L. McMullen, 26, both of Claverack with endangering the welfare of a child, a class A misdemeanor, September 9.

Troopers responded to a reported drug overdose that occurred at the Berkshire Travel Lodge, 12703 State Route 22, September 2. The Chatham Rescue Squad administered several doses of Narcan to the victim and within moments were able to obtain the victim’s pulse.

A subsequent investigation revealed that two other occupants of the room had used narcotics while caring for a three-month-old child who was present at the time of the overdose. Columbia County Child Protective Services initiated an emergency removal of the child from the incident location.

An additional arrest is pending.

Mr. Palermo and Ms. McMullen were both issued appearance tickets directing them to appear in Canaan Court, September 22.

Benjamin Greenley, 19, of Philadelphia, PA, was charged with third degree sexual abuse, a class B misdemeanor, by State Police from Livingston, September 5.

Troopers received a report of an alleged sexual offense, September 2.  An investigation revealed that Mr. Greenley allegedly had sexual contact with a 16-year-old victim between May and July.

He was arraigned in Austerlitz Court and released on his own recognizance.

Troopers were dispatched to a welfare check on Scudderhook Road. The caller told police he believed that Mr. Heins was living in an apartment without running water. When police arrived on scene, they discovered that Mr. Heins had violated a court order of protection by being at the home. He also had damaged a door at the home. Mr. Heins was arraigned in the Livingston Court before Justice Robert Moore and sent to the Columbia County Jail in lieu of $2,000 cash bail or $4,000 bond.

*Nathan Pfeiffer, 26, of Taghkanic was charged with third degree grand larceny, a D felony, and offering a false instrument for filing, an E felony, September 7 at 10:01 a.m. Mr. Pfeiffer was charged following a Department of Labor investigation. He allegedly received unemployment benefits that he was not entitled to by making false weekly certifications that he was unemployed when in fact he was employed.

As a result of the false weekly certifications made by Mr. Pfeiffer, he was able to falsely obtain over $3,000 between May 19 and July 27, 2014.  He was arraigned in Claverack Court and released on his own recognizance.

*Cody A. Cook, 23, of Housatonic, MA, and Matthew R. Bleau, 23, of Great Barrington, MA, were both charged with seventh degree criminal possession of a controlled substance, a class A misdemeanor, and unlawful possession of marijuana, a violation, by Sheriff’s Office First Sergeant Louis Bray and K9 Deputy Travis VanAlstyne September 2 at 8:30 p.m. Deputies were patrolling the Chatham Fairground parking lot and smelled a strong odor of marijuana. Mr. Cook is accused of possessing a quantity of hashish and marijuana and Mr. Bleau is accused of possessing a quantity of heroin and marijuana.  Both subjects were arraigned in Ghent Court and released.  They will reappear in court at a later date.

CHATHAM—State Police from the Kinderhook barracks are searching for a 16-year-old runaway girl. 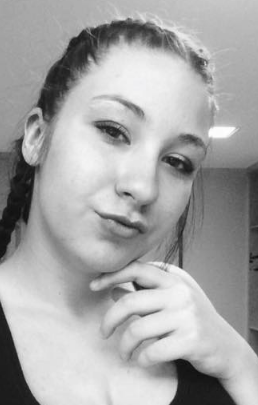 They seek he public’s assistance to help find Jeanette Wilber, 16, of Valatie.

Jeanette ran away from the Kinderhof Home, August 3. She is described as 5’3″ tall, 160 pounds, with brown hair and green eyes. Her family believes she may be in the Troy area.

Troopers have checked several locations attempting to locate both the missing teen. Anyone with information regarding her whereabouts is asked to contact State Police by calling 518 851-3111 or 845 677-7300. Parked vehicles struck.  A BMW SUV was reportedly backing up when it ran over a parked motorcycle and Toyota sedan at 347 Warren Street, Hudson, September 16 at 11:04 a.m. The driver of the BMW was treated at the scene for minor injuries. Further information was not available from Hudson Police. Photo by Chip Moon