September 17 at 8:10 p.m., troopers responded to a Columbia County 911 call reporting a suspicious person at the Canaan Truck Stop. A witness at the truck stop reported that he saw a man remove a king pin lock off of a 2006 Great Dane refrigerated trailer that was stored in the parking area.

The person reporting the incident knew that the suspect, later identified as Mr. Crewell, was not the owner of the trailer.

Troopers arrived on scene and saw Mr. Crewell attempting to leave the truck stop with the stolen trailer attached to a 1999 Kenworth truck. Troopers conducted a traffic stop on the rig and took Mr. Crewell into custody.

*State Police stopped a vehicle on I-90 for a traffic violation September 14 at 9:38 p.m. The driver of the vehicle, Timothy M. Bragan, 34, of Claverack was found to be impaired by drugs while traveling with children ages 4 and 10.

He was taken into custody and brought to SP New Lebanon, where he was evaluated by a Drug Recognition Expert. Mr. Bragan refused to submit to a blood test to determine the drug content in his system and was subsequently charged with: driving while ability impaired by drugs with a child in the vehicle, a class E felony; endangering the welfare of a child, a class A misdemeanor; second degree criminal impersonation, a class A misdemeanor and multiple vehicle and traffic violations.

Mr. Bragan was arraigned in Canaan Court and sent to the Columbia County Jail in lieu of $1,500 cash bail or $3,000 bail bond.

The children were turned over to their grandfather.

State Police reported September 22 that Blake Tutrow, 17, of Chatham, who ran away from his Chatham home after having a disagreement with his mother, September 13, has been located in Indiana with a family member and is safe.

State Police had asked for the public’s help with locating the missing teen. State Police thank members of the public who called in tips to help further this investigation.

Elio E. Ortega, 30, of Port Chester was charged with aggravated driving while intoxicated under Leandra’s Law, a class E felony, September 17 at 4:27 p.m.

Troopers stopped the Honda Civic Mr. Ortega was operating on Stevers Crossing Road for failing to maintain his lane of travel and for not signaling his intent to turn with sufficient notice.

When the arresting officer approached the vehicle, he saw an unsecured three-year-old girl in the backseat. Further investigation revealed that Mr. Ortega was intoxicated at the time of the traffic stop.

He supplied a breath sample that revealed a .08% blood alcohol content. The defendant was arraigned in Claverack Court and sent to Columbia County Jail in lieu of $500 cash bail.

Ward P. Hyatt, 47, of Copake was charged with driving while intoxicated, a class U misdemeanor, by Deputies Jordan Brahm and Zachary Sohotra September 9 at 9:22 p.m. Mr. Hyatt was stopped in a vehicle on Snyder Pond Road. His breathalyzer test yielded a .13% blood alcohol content. He was issued tickets returnable in Copake Court September 26.

Troopers stopped the vehicle Mr. Hammell was operating on State Farm Road for speeding and for swerving off the right shoulder onto the dirt.

He was found to be intoxicated at the time of the stop. Mr. Hammell told police he had been drinking and was leaving a friend’s house en route to another residence.

He provided a breath sample that revealed a blood alcohol content of .10%. He was issued tickets returnable in the Kinderhook Court at a later date.

Due to the FBI receiving electronically submitted fingerprints for background checks, they are lowering their processing fee. Pistol permit applications made until September 30 would require a U.S. postal money order for $89.75.

Sheriff Bartlett reminds county residents that the processing day for pistol permit applications is every Wednesday from 7 a.m. to 6 p.m. Applicants for pistol permits are processed on a first come, first served basis during those hours. No appointment is necessary. Ink rolled finger prints will also be completed on Wednesdays each week. 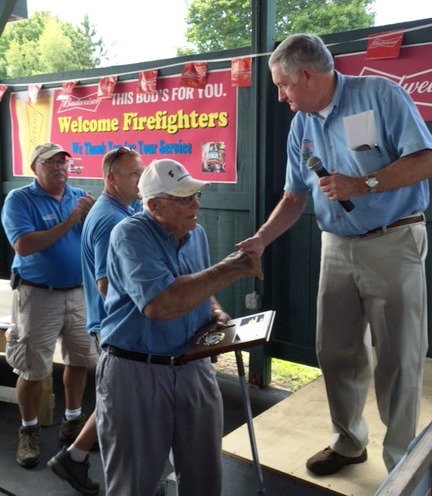