An investigation by the State Police at Livingston indicates that a 2015 Subaru Crosstrek operated by Judith Gagliardi, 74, of Chatham was traveling south on State Route 9, making a left hand turn on to County Route 28, when it collided with a northbound 2004 Honda Civic operated by Donna Preuss, 27, of Philmont. The family of a teenager killed in a car crash mourns. Pictured (l-r), are Dawson Stallman’s sisters, Jazmin Stallman and Janyce Conner and his grandmother Janyce Suchomel. They are holding a photo of Dawson and his twin brother Dylan Stallman. Photo by Lance Wheeler

Ms. Gagliardi, her passenger Wilma Westover of Niverville and Ms. Preuss were taken to Albany Medical Center for treatment of their injuries.

Two passengers in the Preuss vehicle, Sabrina Martinez, 17, and David Zukowski, 28, both of Philmont, were also treated for their injuries at AMC.

Dawson Stallman, 13, a rear seat passenger in the Preuss vehicle, was pronounced deceased at the scene.

The incident remains under investigation, but thus far there is no indication either driver was impaired by alcohol or drugs. Investigators are attempting to determine if the passengers in both vehicles were wearing their seat belts. Anyone with information pertaining to the collision is asked to contact State Police in Livingston at 518 851-2001.

*One person was hurt when her vehicle crashed into a tree on Route 9 at Knickerbocker Farm Road, November 15 at 12:54 p.m.

Mariame Camara, 31, of Wappingers Falls was driving a 2010 Honda southbound on State Route 9 when the driver told deputies she fell asleep at the wheel.

Her vehicle went off the west side of road and struck a tree head on. The Valatie Rescue Squad transported driver, who was sole occupant, to Albany Medical Center for hip and leg pain. No tickets issued and accident was handled by Deputy Kelly Briscoe. Niverville firefighters were also on the scene.

Hudson Police received a call from Nicole Hinz, 32, of Craryville that her boyfriend, Paul C. Kozlowski, 27, of the same address, was being threatened by a man with a gun who had entered his car somewhere near Seventh Street Park, Friday December 2 at 7:47 p.m.

Officers Tracey Roberts and Kevin Keyser immediately responded and saw Mr. Kozlowski standing outside a grey Subaru. He motioned with his head, alerting patrols to a young man seated in the front passenger seat of the car. Patrols took the subject, a 16-year-old Hudson resident, into custody. 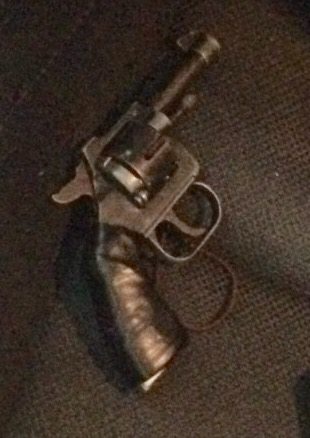 Pictured is one of the handguns seized by Hudson Police December 2. Photo contributed

Officers’ attention then turned to a young man seated nearby on a guardrail in front of Lucky’s Citgo Mart, 718 Columbia Street. When police approached him they noticed the black handle of a pistol in his pocket. Officer Roberts took the subject, a 15-year-old juvenile from Hudson into custody without incident. The weapon was a loaded 9mm pistol.

An ensuing check of the grey Subaru by Hudson detectives revealed a loaded .22 revolver (serial numbers defaced). Police also found a hypodermic needle and 5 packets of heroin. Police say the incident appears to have been a disagreement over the purchase of drugs and the amount of money owed.

“I credit Officers Roberts and Keyser for their quick and decisive action. There is a strong possibility that this may have escalated and ended in gun play. The officers showed restraint and bravery. Our investigation continues, and I want to know where to youngsters acquired these weapons,” Police Chief L. Edward Moore said in a press release.

Heather Stone, who was on the scene, told The Columbia Paper that she saw thick black smoke at the location at 1:33 p.m. and “it took seconds for the fire to fully engulf the trailer” and the Chatham Fire Department was there within minutes. Residents of a mobile home at lot 115 in Edgewood Acres lost pets and belongings when fire swept through the structure. Photo by Heather Stone

In addition to the Chatham, Ghent, Valatie, East Chatham, Niverville, Kinderhook, Tri-Village and Austerlitz fire companies were on the scene. Firefighters were back in service at 6:16 p.m.

Ms. Stone said conditions were cold and windy, fanning the flames. “They lost a few pets and everything they had but the neighbors helped out by bringing blankets out to them.”

The Chatham Rescue Squad, Sheriff’s Office, State Police, Fire Coordinators and the Columbia County Cause and Origin Team were on the scene and the Red Cross was notified and is putting the family up temporarily.

Currently, Our Community Cares, Inc., is collecting clothing for the family which may be dropped off at the organization’s open house this Saturday, December 10 during Winterfest in Chatham at 25 Hudson Avenue.

Chatham Fire Chief Paul Rideout did not return a call for further information by press deadline.