The Turn of the Scrooge / Pantaloons 2016 / Ghent Playhouse

“THE TURN OF THE SCROOGE” is Ghent Playhouse’s 2016 leap of Pantoloons into fractured storyland. It features satire, silliness, songs, blatant anachronisms, good and bad jokes, cross-dressing and (this year) a lot of plot. Playhouse actors create it, and Playhouse aficionados love it. It sells out.

This year it is Dickens’ “A Christmas Carol” that gets lovingly poked and abused. Of course, all of the story’s original Christmas propaganda survives. (“What? You didn’t expect a happy ending?” the rehabilitated Scrooge says to the audience as he exits.)

The sure hand of Cathy Lee-Visscher’s staging has been laid on this on this production. It has inevitability without banality. That her work is sometimes sloppily executed does not seem to matter a lot. 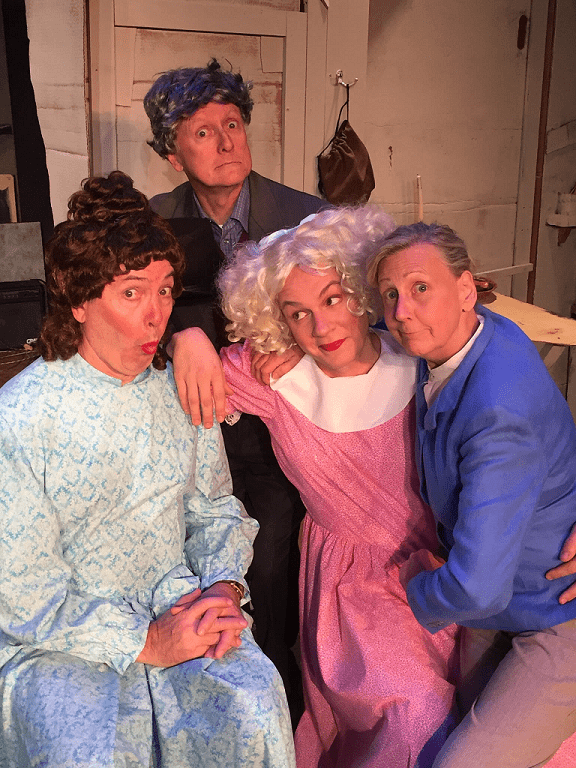 The 2016 Pantoloons production of the original holiday send-up “The Turn of the Scrooge” is on stage at the Ghent Playhouse, featuring (l to r… really) Paul Murphy, Mark Wilson, Sam Reilly and Cathy Lee-Visscher. Photo by Paul Leyden

The cast is a strong assembly of Playhouse “best and brightest.” The greedy old villain is nicely played (without exaggeration or actor’s commentary) by Sally McCarthy. Sam Reilly (sometimes ravishing in golden curls and black velvet) is Tina, a sister of Tiny Tim (played by director Lee-Visscher). As usual, Reilly steals focus. He’s not even trying to steal focus; but there is something about his stage presence that makes one curious about what gesture, what expression, what move he will make next, and eyeballs wander in his direction.

Reilly’s Sweeney Toddish cat-eating segment may be a bit too subtle for some of us, but mostly the Pantoloon humor is obvious, upfront and occasionally lacking in bite (if you’ll excuse the expression).

Paul Murphy’s comely middle-aged matrons are a delight. Though British accents come and go with this cast, Murphy sticks quite consistently with his, and his ladies are lively and charming.

Mark “Monk” Schane-Lydon is a dickens right out of “The Pickwick Papers.” His characters are sharp, polished, and funny.

Paul Leyden (actor/musical director) plays the chained and ghoulish ghost of Jacob Marley. For an extended scene, he steps away from the piano to give one of the strongest, funniest performances of his Playhouse acting career. His piano, on the other hand, could be more supportive of the singers, and someone could certainly smooth out the transitions between dialogue and song.

Pantoloon ideas abound, but this year, groupthink is less than effective when it comes to lyrics. In fact lyrics (attached to some very well-chosen, familiar tunes) are, well…not great.

Costumes (by Joanne Mauer) are spectacular—sometimes perhaps too spectacular for the poverty-wracked Cratchit family—but they are a pleasure to the eye. This time, Maurer doubles as an actor, and though a shot of vocal forte might be helpful, early in the show she delivers a very effective little monologue.

Some of the evening’s best moments happen when the actors jump through the fourth wall to land quips and actions directly on the audience. It is most obvious when the audience is commanded to dance the Fezziwig Jig. And they do!

I have never been entranced or titillated by the cross-dressing tradition; but, in these roles, Murphy and Reilly in particular seemed released into a refreshing freedom—attractive and believable. Maybe that’s what it’s all about.

The set (designed by Sam Reilly) has a children’s-book-19th-century-woody-and-warm appeal. I also liked the ugly, scary armoire, Scrooge’s red bed with shiny oriental bedding, the row of three tankards against a wall, and the cheeky modern calendar. It is pleasant to watch walls, left and right, rotate center to create different venues.