ANCRAM—New England Cottontail rabbits, reportedly close personal friends of the Easter Bunny, can rest easy now because the Department of Environmental Conservation is going to protect them and a place they like to live.

Ancram Town Supervisor Art Bassin made the announcement at the February 16 Town Board meeting. The Ancram land amounts to 325 acres and lies between Doodletown and Westfall roads, said the supervisor.

Talk of the land acquisition first sprang up at the Town Board’s February 2015 meeting and was reported in The Columbia Paper in March of that year. It has apparently taken two years for negotiations with landowners to result in the recent purchase.

Contacted this week, the DEC declined to provide details of the land acquisition until it makes “a formal announcement about it in a few weeks.”

Back in 2015, Supervisor Bassin received a letter from DEC Natural Resources Supervisor Peter Innes, who let the Mr. Bassin know that the DEC was considering buying certain Ancram land from “willing sellers only.”

Mr. Innes wrote that the DEC wanted the land so it could establish a new Wildlife Management Area.

“The DEC is interested in protecting and enhancing important habitat for [a] variety of wildlife species, especially the New England Cottontail rabbit. This is a species of greatest conservation need in New York, and a candidate species for federal listing as threaten[ed] or endangered.

The DEC might eventually acquire up to 1,500 acres in Ancram and Taghkanic, he said, noting that Wildlife Management Areas do not pay local property taxes and “anticipated funding” for the “project area” would come from federal wildlife restoration funds.

Ancram’s Conservation Advisory Council responded to Mr. Innes’ letter, saying it was pleased that the DEC might purchase land for a Wildlife Management Area. The council offered support, information and maps assembled in the town’s Natural Resources Conservation Plan.

Taghkanic Supervisor Ryan Skoda did not return a call for comment by press deadline.

In other news at the February 16 meeting, the board:

• Got a look at a hefty 3 by 5-foot sign that says, “Welcome to scenic Ancram…Historic farming community.” The sign depicts a white line drawing of a barn with a silo set amid rolling hills on a green background. Councilwoman Madeleine Israel, Communications Committee chair, who had the sign made, said it is “a gateway sign” intended to be placed on the roadways leading into town for the purpose of letting people know where they are and welcoming them. 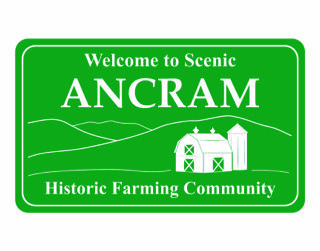 This “gateway sign” would be posted along roadways entering the Town of Ancram. Photo contributed

The town is considering ordering several of the signs which cost $300 each installed. They are made of marine plywood with a special sealant coating and are expected to last 20 to 25 years. The sign is currently at Town Hall where residents can look at and comment on it

• Heard from Supervisor Bassin that his mouse-catching streak has ended. While he reported trapping six mice total in December and January, he snared no mice in the past month. While he is “taking that as a sign that I’ve cleared out the nest,” some think the mice have just caught on to his tactics.