HUDSON—The Firemen’s Home is one of a kind.

It is the only long-term, skilled nursing facility in the country exclusively for volunteer firefighters, their spouses and fire service ladies auxiliary members. 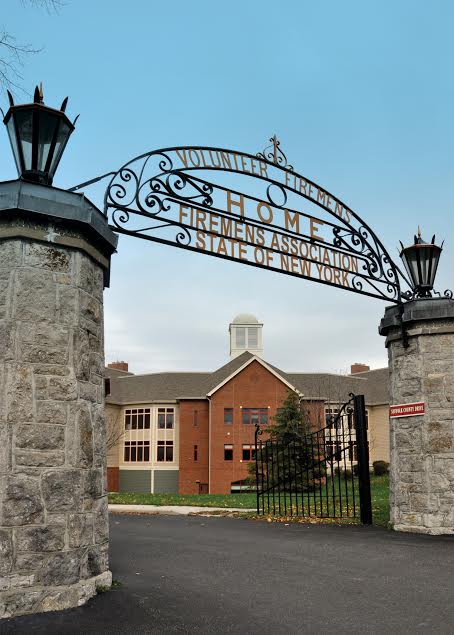 The iron gateway entrance to the Firemen’s Home as it appears today. Photo contributed

In a celebration befitting the home’s 125th anniversary, the Firemen’s Association of the State of New York (FASNY), which owns and runs the home, has the two-day “firematic event of the year” lined up for Friday, May 19 and Saturday, May 20 and everyone is invited.

“Dedicated to all who have served the volunteer fire service,” the Firemen’s Home at 125 Harry Howard Avenue, sits on a campus of about 120 acres, which includes the FASNY Museum of Firefighting, a Firefighters Memorial, a cemetery and several ballfields.

It is a 92-bed, licensed and certified residential healthcare facility, which “provides quality healthcare, rehabilitative therapy, daily social activities and special events,” according to www.firemenshome.com.

FASNY calls the place, set against the backdrop of the Catskills, a “Home Away from Home, a sanctuary of sorts for former volunteer firefighters.”

Firemen’s Home Administrator Arthur Proper told The Columbia Paper this week that more than 20,000 people are expected to watch the parade and thousands more visit the grounds for the muster, ceremonies, tours, concessions and other activities planned for the home’s quasquicentennial.

Mr. Proper lives in Kinderhook and has been the home’s administrator for the past three years. Before that he was the administrator at Pine Haven in Philmont since 1993.

In 1892, FASNY established the Volunteer Firemen’s Home for indigent or sick firefighters. The current Firemen’s Home was constructed in 2007 and the old one was torn down when the new one was finished. The grounds once included a working farm with an array of farm animals and fields where food for the residents was grown, said Mr. Proper.

The Firemen’s Home is a special place where volunteer firefighters are never forgotten, said Mr. Proper. 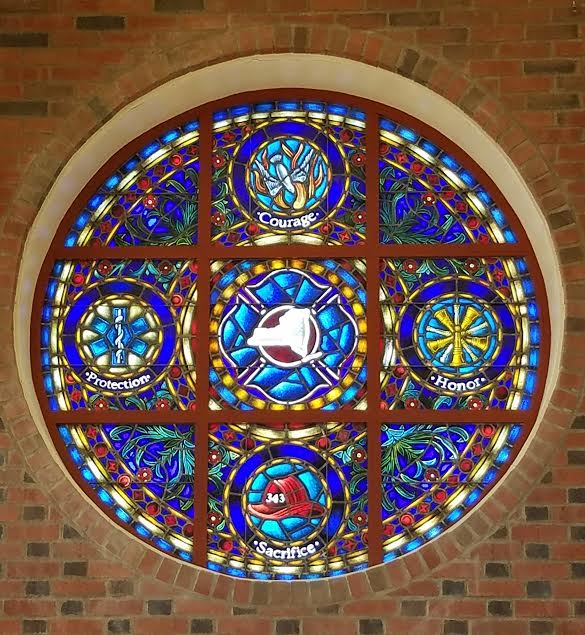 • Friday, May 19, 7 p.m., a Memorial Service and Caring Window Dedication takes place in the Firemen’s Home Chapel. The Caring Window is being unveiled as part of the anniversary celebration and represents the dignity and pride of the fire service and demonstrates the FASNY Home’s caring for those who have served. The stained glass window, a piece of art, measures seven feet in diameter, with vibrant colors and images. The design is intended to convey inspiration and serenity for the residents

• Saturday, May 20, FASNY partners with the Hudson Fire Department for the 161st annual Inspection Day Parade.

The invitation-only parade, consists of local fire departments and other fire companies from across New York and other states, with marching bands, muster participants and at least 113 fire trucks. Vintage fire trucks will be showcased, celebrating firefighting history and heritage.

Parade line-up areas are on Green, State and Seventh Streets. The parade, which includes antique apparatus, is scheduled to step off at 9:30 a.m. and the rest of the parade gets underway at 10 a.m. The spectators’ parade route begins along the 700 block of Columbia Street, then turns left at the Seventh Street Park, down Warren Street to South Fifth Street, across Short Street to Harry Howard Avenue.

The parade passes the Firemen’s Home, while muster participants and apparatus roll out from the parade, into the muster area for viewing on the museum and home grounds. The muster grounds are open from 10 a.m. to 4 p.m.

The muster is planned to reappear as an annual event. Fire engines compete for trophies as a panel of judges evaluates their attributes during the muster; there are also planned demonstrations and competitions such as races and timed events that test firefighters’ skills and agility. Teams of five members compete to connect nozzles to hoses, hoses to hoses, and hoses to the fire hydrant, as well as knock down targets as quickly as possible. Competitions such as hose races improve basic firefighting skills as well as build camaraderie among participants.

The formal FASNY Firemen’s Home 125th anniversary program kicks off with the sound of the bagpipes at 2 p.m.

The ceremony includes a Color Guard’s Presentation of Colors, the singing of the National Anthem, a Brick Memorial Rededication, anniversary award presentations to the FASNY Firemen’s Home and the unveiling of a 10-foot-tall firefighters commemorative granite obelisk stone. Local and state dignitaries expected to attend.

Also on the grounds Saturday will be tours of the home; a gold leaf demonstration by Master Gold Leaf Artist Frank Smith; craft activities for the youngsters; games will test visitors’ knowledge about firefighting and fire engines during the muster.

For collectors, souvenir shoppers and the many “fire buffs” expected to attend, at least a dozen vendors will sell an array of firematic, one-of-a-kind and vintage items. There will be a 50/50 raffle and door prizes every half-hour, each prize with a FASNY Museum canvas tote bag included.

The FASNY Museum of Firefighting offers free admission for the day, with extra staff on-hand to answer questions. Special muster/anniversary items such as T-shirts and Challenge Coins will also be for sale in the museum gift shop.

For questions or event activities updates visit www.fasnyfiremuseum.com or call 518 822-1875 X 10. For more information about the event visit www.firemenshome.com/anniversary.

No tobacco, alcohol or pets (except service animals) are permitted on the grounds.

The FASNY Firemen’s Home is a 501(c)3 non-profit charitable organization supported through the efforts of the Firemen’s Association of the State of New York (FASNY) and private contributions.