KINDERHOOK–Three of the five candidates running for the Ichabod Crane Board of Education came to a Meet the Candidates forum at the school Tuesday. There are four open seats on the board this year. Candidates for the board will be on the annual budget ballot May 16.

Students from the High School’s Participatory Government Class presented questions to Brendan Caluneo, Tammy Crawford and Craig Luckfield. Neither of the two current board members running for reelection, Dan Cohn and Susan Ramos, could attend the May 2 forum but they sent statements.

There was a sixth candidate, Francis McKearin, but he has withdrawn. School officials are looking into whether it’s too late to have his name removed from the ballot.

Three positions on the ballot are for full three-year terms, with one candidate taking office immediately after the election and the others beginning their terms in July. The remaining seat is to complete the final year of a vacancy created by the resignation of a board member.

The candidates who did show up for the forum talked about their connections to the district and the community. Most of the people in the audience were students from the government class and district staff.

Brendan Caluneo, a recent graduate of Ichabod Crane, now attends Hudson Valley Community College. He said that as a board member he would be interested in classes that help students with post-graduate life and giving students a “good foundation.” Mr. Caluneo pointed out that he has been coming to board meetings and sitting in on board committee meetings. If he becomes a board member he said he would make an effort to get “to know students on a personal level.”

Tammy Crawford, the former owner and current manager of Carolina House Restaurant in Kinderhook, stressed her business skills as assets for the board. “I’m very good negotiator and compromiser,” she said. She talked about her connection to the public as a local business person, and a committee member working with local groups, like Chatham Cares 4U, that are helping deal with the opioid crisis.

Craig Luckfield said of his investment in, and connection to, the community, “I have kids in the district, I’m a community member, I’m a taxpayer,” he said. His wife is a teacher at the Primary School. He talked about making sure students have all they need to graduate from the district “career and college ready.” He said if elected to the board he hopes to tour every building in the district to talk to the students and teachers about what they need.

In their written statements, Ms. Ramos and Mr. Cohn talked about their time on the board and their hopes to continue the work they have started. Ms. Ramos pointed out that she has been on the board for six years. Mr. Cohn was appointed to the board in September and was part of the district committee involved in the search for a new superintendent.

The current board members’ statements and the questions from the students in the government class were read by two students, Bradley Kittle and Noelle Serino.

All five board candidates’ statements can be found on the district website, www.ichabodcrane.org/News/16-17/BoardCandidates.

The annual school budget vote and board member election will be held on Tuesday, May 16 from 8 a.m. to 9 p.m. in the High School Gymnasium.

After the candidate forum the board held a public hearing on the proposed $39,189,544 budget for 2017-18. There was no comment from the public on the budget. There will also be a $477,789 proposal for bus purchases on budget this year. 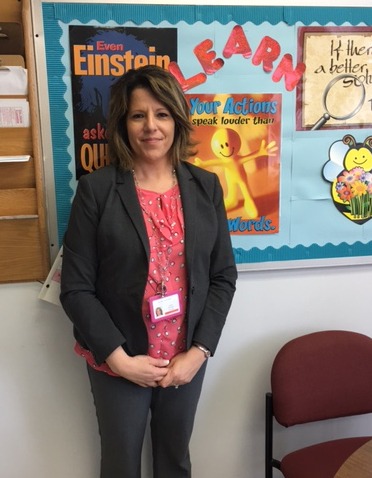 Andrea Williams was appointed the new Primary School Principal the Ichabod Crane Board of Education meeting on Tuesday, May 2. Photo contributed

• The board appointed Berit Erikson to the tenure in Special Education

• The High School will host a staged car crash Thursday, May 11 for the 11th and 12th grades. After Tuesday’s meeting, High School Principal Craig Shull told The Columbia Paper there would a presentation for the students at 12:50 p.m. and the students would be outside from 1:15 to 2:15 p.m. watching how county first responders deal with car accidents.

The next board meeting will be June 6 at 7 p.m. in the High School Library.