CLAVERACK—Passersby rescued two young women from their overturned car that was submerged in a swampy pond along State Route 23 in Martindale, June 15.

Craryville and Hillsdale firefighters, the Community Rescue Squad, State Police and Sheriff’s deputies were called to the scene of the accident at 1202 Route 23 at 9:39 a.m.

According to State Police, Ciera Vanackooy, 19, of Elizaville was driving southeast when due to a distraction inside the car, her vehicle exited the road and rolled into a pond. Ms. Vanackooy and her 16-year-old passenger were trapped inside. 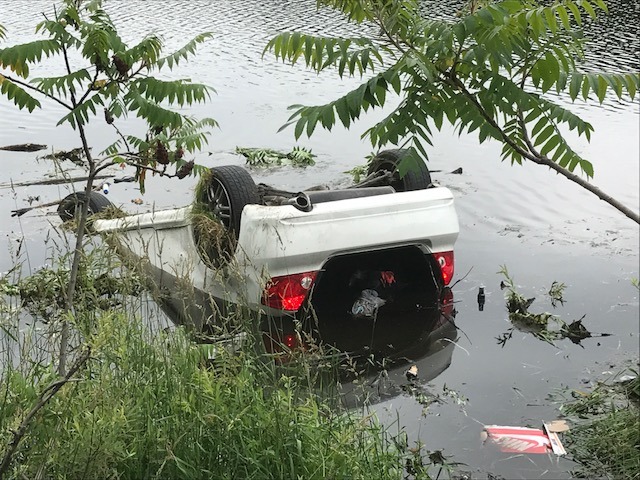 Two people were saved from this car submerged in a pond along Route 23, Martindale. Photo by Lance Wheeler

Newsman Lance Wheeler arrived on the scene and interviewed on video John Platt of Cooperstown, who was driving by and saw the submerged car upside down in the water just off shore with its wheels in the air.

He told Mr. Wheeler he made a U-turn and went into the pond to try to get any occupants out. He said he heard “frantic pounding” and “muffled yelling” coming from inside the vehicle.

He said he tried to break a window with his knife without success, then another passerby stopped and threw him a hammer.

Mr. Platt, an employee of the Asplundh Tree Expert Company, said the hammer worked and when he broke the window, “the trunk opened up, a hand came up” and he pulled one of the occupants out.

A second person was still in the vehicle yelling something inaudible, said Mr. Platt on the video tape.

Another passerby interviewed by Mr. Wheeler was Dan Kimbel, who said he recognized the car as belonging to Ms. Vanackooy, his co-worker at Inflight, Inc.

Mr. Kimbel said he was worried about her and stopped to help.

He said Ms. Vanackooy was already out of the car and a “guy in a Speedo” was in the back of car and pulled the second girl out.

“I just wanted to make sure everybody was safe. What would anybody else do?” asked Mr. Kimbel.

The man in the Speedo, later identified as David Brennan who lives within a mile of the accident scene, confirmed that he pulled the second person out.

Neither Ms. Vanackooy nor her passenger was hurt. But they were taken to Columbia Memorial Hospital to be evaluated. Ms. Vanackooy was issued traffic tickets for speeding, having an unsafe tire, failure to drive on right side of roadway and use of portable electronic device(s).

Firefighters were back in service 10:41 a.m.

State Police responded to a complaint about suspicious activity which resulted in a traffic stop on Highland Road, June 7 at 12:30 a.m.

During an interview with the vehicle operator, Ethan Reck, police discovered that he possessed what appeared to be images of child pornography. State Police Bureau of Criminal Investigation was called in and commenced an investigation.

Ethan R. Reck, 21, of Chatham, the driver of the vehicle, was charged with four counts of possession of a sexual performance by a child, a class E felony. He was arraigned in Claverack Court before Justice Michael Cozzolino and sent to the Columbia County Jail in lieu of $20,000 cash bail or $40,000 bond.

The investigation into this case is continuing. State Police urge anyone with information or knowledge of Mr. Reck and/or the case to contact the BCI at 518 851-2973.

Ricardo Mercado, 57, of Claverack was charged with first degree criminal contempt, a class E felony, by State Police from the Livingston barracks, June 4.

A Taghkanic woman reported to State Police that Mr. Mercado went to her home June 3, in violation of an active order of protection.

Police found Mr. Mercado at his home June 4 and took him into custody.

He was arraigned in Claverack Court before Justice Michael Brandon and was sent to the Columbia County Jail in lieu of $10,000 cash bail or $20,000 bond. He was scheduled to appear in Taghkanic Court at a later date.

Mr. Mercado was additionally arrested June 1 on charges of second degree criminal contempt and fourth degree stalking, both misdemeanors. He allegedly followed the victim on Healy Boulevard, Greenport in his vehicle in violation of an order of protection, causing her to fear for her safety. He was arraigned in Claverack Court and remanded to the Columbia County Jail in lieu of $1,000 cash bail. William Kraus appeared at his sentencing. Photo by Lance Wheeler

Admitted rapist gets 8 years in prison

HUDSON—William Kraus, 45, of Ancram was sentenced to eight years with the State Department of Corrections upon his conviction by plea of first degree rape; first degree criminal use of a firearm and first degree unlawful imprisonment by Judge Richard M. Koweek in Columbia County Court, June 12.

According to a press release from District Attorney Paul Czajka, the crimes were committed in Hillsdale. Columbia County Sheriff’s Office Investigator Patrick Logue handled the case and arrested Mr. Kraus, who was represented by Michael Howard, Esq.

* Joseph Banfield, 37, was sentenced to one year with the State Department of Corrections and two years post-release supervision upon his conviction by plea to third degree criminal possession of controlled substance, a class B felony by Judge Jonathan D. Nichols, April 28. Sheriff’s Office Investigator Paul Graziano investigated this matter and arrested Mr. Banfield in Valatie. He was represented by Dennis McEvoy, Esq.

* Peter McArdle, 54, of Hudson was sentenced to six months in the Columbia County Jail; five years probation and ordered to pay $40,091.80 in restitution upon his conviction by plea of third degree welfare fraud, a class D felony, by Judge Richard Koweek, May 1. Sheriff’s Office Investigator William Dunspaugh investigated this matter and arrested Mr. McArdle in Hudson. He was represented by the Public Defender.

* Meranda Hamm, 25, of Ghent was sentenced to six months in the Columbia County Jail, five years probation and ordered to pay $630 in restitution upon her conviction by plea of second degree attempted burglary, a class D felony, by Judge Koweek, May 1. Sheriff’s Office Investigator Patrick Logue handled this matter and arrested Ms. Hamm in Stockport. She was represented by John Leonardson, Esq.