SPENCERTOWN—What’s in a flag besides one piece of cloth in different colors?

“It’s a symbol, and symbols are powerful,” said Cheryl Roberts, the creator of the purple-and-white Keep Hope Alive flag.

Any number of symbols resonate for us—the U.S. flag, the eagle, the rainbow flag, Ms. Roberts said in a phone interview Tuesday. “People come to recognize them, and they’re reminders of who we are, what we believe in and what we stand to lose. 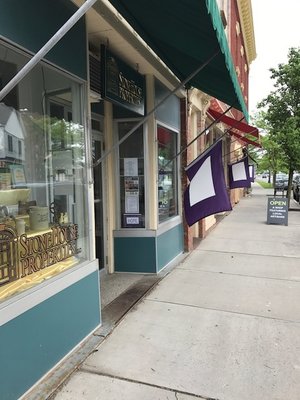 Hope flags hang outside businesses along Main Street in the Village of Chatham. Photo contributed

“Right now, what we need is a message of hope—that public discourse wasn’t always like this, and it doesn’t have to be like this.

Ms. Roberts, a lawyer who lives in Spencertown, felt this way after the presidential election. It was a sentiment underscored by her friend Isadore “Ike” Cassuto, also of Spencertown. Mr. Cassuto served in the Air Corps during World War II as a navigator on B-17 bombers in the European theater.

Shortly before his death in December 2016, at 92, Mr. Cassuto told Ms. Roberts, “This is not the America I fought for.” When she asked if he could give her a word of hope, he said, “I have none.”

On Christmas Day, Ms. Roberts opened a gift from her sister: a purple scarf and a copy of Jenny Joseph’s poem “Warning,” which begins, “When I am an old woman I shall wear purple.”

Ms. Roberts is 54, “a good time to take stock,” she said Tuesday. At Christmas, she asked herself, “What matters most?” The answer was easy for her: “My country, my children and their future.”

“Warning” celebrates purple as a color of strength, wisdom and compassion. Wishing to honor Mr. Cassuto, and to extend hope to her two adult daughters, Ms. Roberts decided to pair the purple with white, for hope.

Then she enlisted her friends Linda Mussmann and Claudia Bruce, founders of Time & Space Ltd. in Hudson, to help create a citywide art installation using purple-and-white flags in a message: Keep Hope Alive.

On January 2, Ms. Roberts requested a custom-made flag from Arkansas Flag and Banner, and on January 20, Inauguration Day, the streets of Hudson were lined with 100 purple and white flags.

Also helping with the effort were the Hudson Business Coalition, Inc.; Alana Hauptmann of the Red Dot Bar & Restaurant on Warren Street; Christopher Draghi, who owns a small business in Hudson; and Charlie Ferrusi, a Hudson native and community activist.

“I was heartened to see the business community engaged so thoroughly,” said Ms. Roberts. “Small businesses are the backbone of the economy in this country. What they think is important. The arts community also came on board, and individuals bought flags.”

Chatham had a Hope Flag day May 20. Also available are placards, white framed in purple, with the word Hope in the center.

The flags have now spread to New Jersey, Massachusetts, North Carolina and Rhode Island. “So far, it’s a labor of love,” said Ms. Roberts, with 10 flags to one address in North Carolina a noticeable blip in the order radar. The goal is to pay for the start-up and then donate any profits to nonprofit organizations.

Ms. Roberts is executive director of the Greenburger Center for Social and Criminal Justice. It’s the first organization of its kind in the United States, she said, and completely separate from the Hope Flag effort. Her days are absorbed with legal work for criminal justice reform—“a lot of on-site work and lobbying,” she said.

Is hope being kept alive, in early August?

“I hope so,” said Ms. Roberts. “I wanted this symbol to remind people that what’s happening now is not normal. I worked on Capitol Hill in the late 1980s, for Democrats and for Republicans. I worked for John Chafee (1922-99) of Rhode Island, a Republican senator, governor and secretary of the Navy in the Nixon Administration.

“Chafee was definitely a Republican, but a moderate Republican. He worked with John McCain, John Warner, Ted Kennedy—they all worked together.

“I care about the environment, and President Nixon, a Republican, signed a lot of environmental legislation,” she pointed out.

“We shouldn’t become used to the language, the rhetoric we hear today,” she continued. “Whatever party you’re in, it doesn’t serve anyone to use that language when we face serious problems.

“The flag says it doesn’t have to be that way. We can come together in a productive way.”

For more information on the Hope Flag, visit keephopealiveinternational.org.