↓
Home Menu ↓
Skip to primary content
Skip to secondary content
Home→News→Game of drones? Not for the DEC

GHENT–Have you recently noticed a loud, buzzing sound while strolling through the woods but a swarm of angry bees was nowhere in sight?

Perhaps you were within earshot of one of the fleet of 22 unmanned aerial vehicles (UAVs) or drones recently deployed by the New York State Department of Environmental Conservation across the state “to enhance… environmental management, conservation and emergency response efforts,” according to a September 25 DEC press release.

Bordering Massachusetts and Vermont on the east and Pennsylvania on the southwest, DEC Region 4, which includes Columbia County, along with Albany, Delaware, Greene, Montgomery, Otsego, Rensselaer, Schenectady and Schoharie counties, is one of seven DEC regions where DEC drones are currently stationed, Benning DeLaMater at the DEC press office told The Columbia Paper this week.

The DEC has a total of nine regions and drones will eventually be stationed in the remaining two regions as well, he said.

Region 4 drones are based at DEC regional headquarters in Rotterdam, Schenectady County, according to DEC Spokesman Rick Georgeson.

Drones have already completed missions and have “greatly improved DEC’s ability to monitor and protect the lands, waters, and wildlife while ensuring environmental quality and safety for residents,” the release said.

Here in Columbia County, the DEC has used a drone at the Stockport Wildlife Management Area in the towns of Stockport and Greenport to evaluate the different types of forest vegetation found in the area, Mr. Georgeson said.

Back on April 4, the DEC launched a drone over the west side of the Hudson River in Catskill, where the barge Meredith ran aground just north of the Catskill Creek while hauling 60,000 barrels of gasoline to the Port of Albany. The drone provided images that assisted in the agency’s assessment of the surrounding area for signs of a potential spill. Fortunately, none was found and the barge was freed later that night, according to a DEC-produced video on YouTube of its drone program.

A DEC drone was deployed over Hunter Mountain to inspect the roof of the fire tower and provided photographic evidence that allowed the DEC to determine the roof needed to be replaced.

Each drone is equipped with standard and thermal infrared cameras and can legally fly at altitudes below 400 feet. A human pilot operates the drone using a remote control device on the ground from distances of up to three miles away.

The DEC has 14 such pilots who trained for several months with the Northeast UAS Airspace Integration Research team.

The DEC UAV program was developed with guidance from the Federal Aviation Administration (FAA), which also certified the program.

Drones have a number of applications, said Mr. Georgeson including:

• Counting the number of anglers that utilize particular stretches of streams

Drones have already helped the DEC explore for underground bat caves to locate entrances to these sites during ground-based searches. “Knowledge of the location of entrances to hibernation sites helps DEC staff assess the status of bat populations.” A DEC UAV’s thermal sensor was able to detect the location of previously unknown hibernation areas in Mineville, Essex County.

The DEC deployed two drones to Texas to help aid in Hurricane Harvey disaster response. The drones were used as part of the search-and-rescue effort to locate persons, significantly reducing the hazard for responders and improving response time. In addition, Governor Cuomo dispatched three drones and two DEC operators to Puerto Rico to assist the New York Power Authority in restoring the power grid and other emergency response missions.

Drones will also help staff quickly assess environmental damage from natural disasters such as dam breaks, ice jams, flooding, hurricanes, tornados and air quality events. And the devices give scientists opportunities to observe landscapes from above and provide baseline and change-comparisons over time for enhanced data analysis.

Each year, forest rangers respond to 250 search and rescue calls, and many times environmental conditions, like low visibility and night conditions, prevent manned aircraft from providing support. This lack of information often increases the time to respond to stranded and distressed persons in need of medical attention. UAVs equipped with infrared sensors can transmit real-time location information to ground search-and-rescue crews, potentially saving time and lives, according to the release.

Not only has the DEC launched its own drone fleet, but it is in the early stages of figuring out what kind of public drone use will or won’t be allowed on state land. Allowable uses and regulatory mechanisms for this use will depend on the land designation.

The DEC’s new drone program could be deployed to Columbia County to assess the moose population in light of three sightings in just the past week.

Documenting rare and endangered species and habitats and radio signal tracking for wildlife are listed among the additional drone program benefits.–Diane Valden 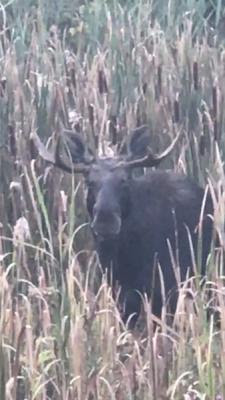 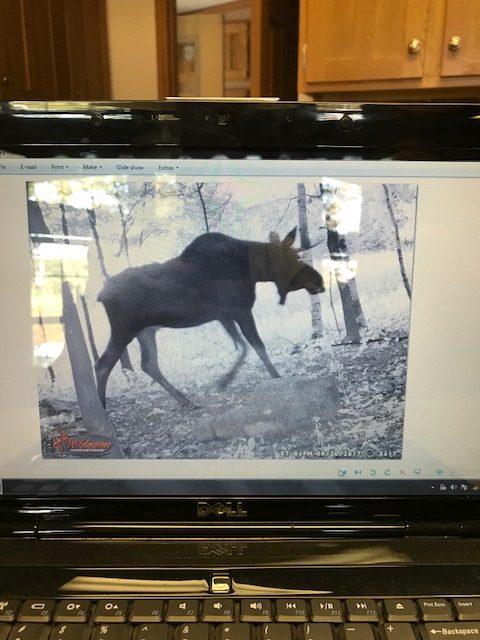 Richard Langone reported capturing this moose photo on one of his trail cameras about 100 yards off Skyline Road and about a quarter mile from Poole Hill Road, Ancram, Wednesday, September 20 at about 7 p.m. Trail cam photo contributed 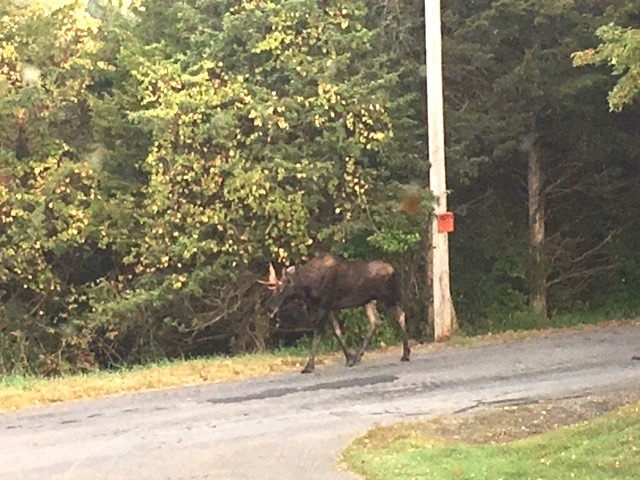 Kathy and Jim McNamee saw a uncommon sight out their window around 7 a.m. Friday, September 22 as a large moose passed by their home on Miller Road #2 in Claverack. Photo by Jim MacNamee