STUYVESANT—Three new farms in Columbia County have been awarded grants to help them do what they do best—produce food.

The farms, located in Stuyvesant, Greenport and Copake, will receive grants totaling more than $100,000.

The Empire State Development Corporation has appropriated more than $1 million for the New York State New Farmers Grant Fund Program to provide grants of between $15,000 and $50,000 for up to 50% of project costs for beginning farmers who produce an agricultural product in the state. The purchase of new or used machinery and equipment, supplies and/or construction or improvement of physical structures used exclusively for agricultural purposes can be covered under the program.

Twenty-seven farms in eight regions encompassing twenty counties across the state appear on the “awarded farm operation” list that was part of an August 28 letter from Program Coordinator Genevieve Carr sent to town clerks in the municipalities where the chosen farms are located.

Qualifying farm operations must have a minimum of $10,000 in sales from products grown or derived from the applicant’s farm operation as reflected on 2015 tax returns. Farm owners have to be 18 years of age, be in the first 10 years of owning the farm and participate in the day-to-day production of an agricultural product grown or raised on the farm. 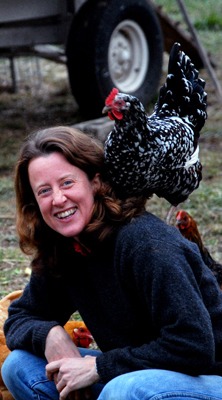 Sue and Mark Decker own Blue Star Farm, 545 County Route 26A, Stuyvesant, which is the recipient of a $50,000 matching grant under the New Farmer program. Now in its eighth season, the farm grows more than 130 different varieties of vegetables and herbs along with strawberries and rhubarb.

The home place is three miles east of the Hudson River, where two 30 by 96 foot, high-tunnel greenhouses are located. Ms. Decker told The Columbia Paper this week that she also farms five acres of rented land in Kinderhook.

Ms. Decker said, “It’s organic without the government.” The farm’s produce is sold at farmer’s markets and wholesale. The farm employs four seasonal workers a year.

The $50,000 grant will allow Ms. Decker to renovate and expand a barn for a vegetable washing and packing area, a walk-in cooler and crop storage area.

“We farm through the winter, so we need a heated space with running water, and an employee area,” she said.

Ms. Decker, 55, grew up on a farm in Pennsylvania, but her career was as an independent graphic designer and producer in New York City. She was working in Park Slope, Brooklyn, when she became involved with community supported agriculture (CSA) and decided on a new path in life.

Mr. Decker “bops back and forth from the farm to New York City, where he is the director of digital imaging at Forbes magazine,” while Ms. Decker runs and works on the farm.

She said the “grant opportunity was really fabulous” and she “appreciates being able to move forward with our construction project.” Learn more at www.bluestarfarmny.com

The second of the three grant recipients is Letterbox Farm Collective, 4161 U.S. 9, Greenport, which will receive $31,000 to purchase equipment and construct hoop houses to extend the agricultural season, house livestock and create a vegetable wash station.

According to the farm’s website, www.letterboxfarm.com, the farm was founded four years ago. It is a collectively owned and operated commercial farm.

“We are a young, quickly growing start-up, working to build a diverse and sustainable farm. We tend 64 acres of fields, woods, ravines, and mountainside, just outside downtown Hudson.”

The farming team of seven, raises vegetables, herbs, flowers, pork, chicken, eggs and rabbits using best practices in animal welfare and organic management. Goods are distributed through four farmers markets, a fleet of restaurants in the valley, and a full-diet CSA.

The third farm is MX Morningstar Farm, 1639 County Route 7A, Copake, which will receive $30,436 for the purchase of equipment and supplies to increase vegetable yields and crop storage capacity.

The farm is on land leased from the Copake Agricultural Center, which purchased 125 acres in and around the hamlet in 2013 to ensure that it would remain affordable to farmers and in agricultural production in perpetuity.

MX Morningstar Farm, named for proprietor and farmer, Max Morningstar, “grows a diverse array of vegetable crops on 62 acres of Blasdell channery loam,” according to the website www.mxmorningstarfarm.com

The farm is USDA-NOP Organic Certified by NOFA-NY, and grows without the use of synthetic fertilizers or pesticides.

“Our goal is to make top quality, great-tasting, fresh-picked vegetables available to you and your family throughout the season through farmers markets and our farmstand. We offer wholesale delivery to area restaurants and produce departments in eastern New York, western Connecticut, and the Berkshires,” says the website.