“LUCKY ME” BY ROBERT CAISLEY is about unlucky Sara and her bumpy ride to love. Sara (played here by Colleen Lovett) lost her cat, her pet fish, her electricity, her husband (he fell off the roof); and, since the roof thing, all her boyfriends are inexplicably accident-prone. When we first meet her she is on crutches.

Sara’s worst luck is that Leo, her Daddy (John W. Noble), lives with her. It appears that Daddy has employed his wit, his wiliness, his blindness and his dementia (real and not so real) to keep her life- and husband-deprived.

You already know what’s going to happen. Fortunately there is a lot of funny dialogue before you get there, much of it supplied by Daddy Leo, whose loud, tart, withering, dumb/clever negativity rules the play as well as the roost. 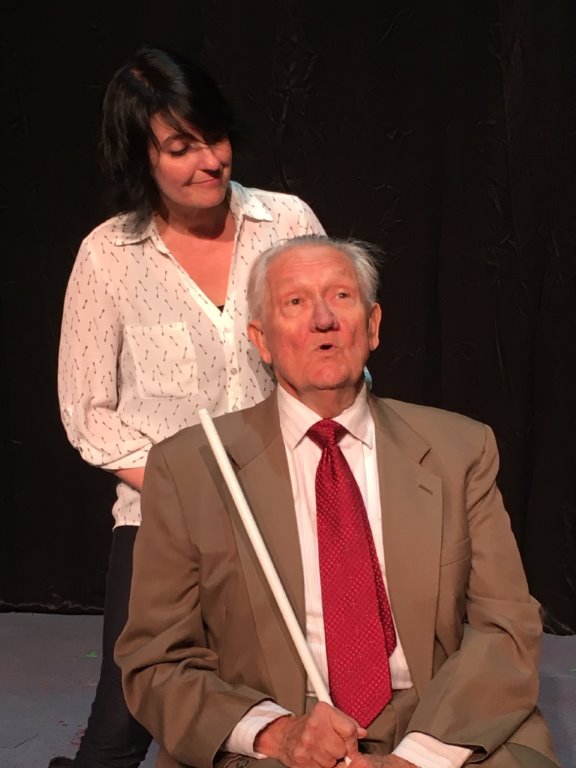 Colleen Lovett and John Noble bring “Lucky Me” alive at the Theater Barn in New Lebanon. Photo by Phil Rice

Noble’s Leo has the kind of witty viciousness that is great on stage and miserable if you have to live with it. He bellows. He attacks. He verbally whips everyone into submission. The actor loves it and we do too.

Lounello makes Tom a guy you could keep long-term, the kind of guy who is both soft and attractively masculine. Except for an actor’s tic (a scratching of scalp so repetitious that makes one fear blood flow), this Tom is a nicely realized character. A female person could trust her future with Lounello/Tom.

Toby Wherry, an actor who brings a diverse and watchable oddness to each of his characters at the Theater Barn, is Sara’s intriguing Ukrainian landlord and former wounded boyfriend.

Director Phil Rice has given Lovett a major first-act obstacle: most of her dialogue seems aimed at the stage-right wings. She is profile only—with a hairstyle that further obscures her face. Lovett has a pretty face; it would be nice to see it. And, after all, so much acting happens there. The result is that the other actors always seem to be upstaging her, a condition that takes the edge off her character.

As so often happens, this cast is better than the play. After many minutes of fairly good jokes, the play-mood changes radically. Jokes disappear. Sara offers a long telephone monologue supplying most of the backstory, and the play rushes to its inevitable happy end.

Between scenes the audience gets some story-appropriate tunes, in particular ”Someday My Prince Will Come” and “I’m Beginning to See the Light,” (better bulbs, no doubt). Both songs are dished up in cool, languid, boppy arrangements. Then at intermission there is a stretch of unidentifiable noise that may have been meant as music.