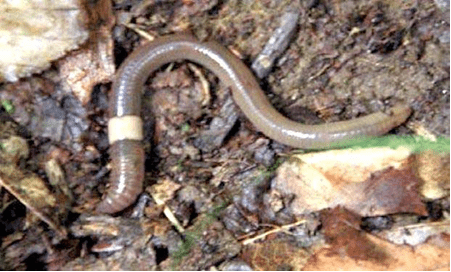 CLAVERACK—Why wait for the release of the latest Halloween flick when you can stay in the comfort of your own home or yard and be scared out of your wits?

“Crazy jumping worms that have been rearing their invasive heads” have caused Cornell Cooperative Extension (CCE) of Columbia and Greene Counties master gardeners to cancel their Fall Plant Swap and Sales scheduled for October 7 in both counties, according to a press release.

Donna Peterson, CCE of Columbia and Greene Counties master gardener volunteer coordinator, told The Columbia Paper by phone this week that the worms, “Amynthas agrestis,” are also known as, crazy worms, snake worms and Alabama jumpers. They are Asian earthworms, originating in Japan and Korea, that were introduced in the southern United States when they were sold as fish bait or were transmitted in potted plants or soil. Crazy worm egg cocoons can also be transported on shoes and wheels.

Being the “good stewards of the earth” that master gardeners are, they became aware that these crazed worms were inhabiting many local gardens. Since the worms live in soil, compost or top dressing (mulch), as well as, in plant materials, master gardeners did not want to aid in their spread by introducing them into other gardens via the plant sale and swap. Though they canceled this event that raises funds to support master gardener programs, they “decided to use this as a teachable moment and share this very valuable information.”

Master Gardener volunteers will be available that day (October 7) to provide information on the latest species to threaten landscapes, gardens and forests: 10 a.m. to noon, at the Extension Education Center in Claverack and 9:30 to 11:30 a.m. at the Agroforestry Resource Center in Acra.

Ms. Peterson explained that while the worms themselves will die when the cold weather arrives, their egg cocoons contained in casings underneath the soil overwinter and will emerge next June.

“They love the warm weather,” which explains why they have been so active recently, and live closer to the soil surface than the beneficial kind of earthworms that came from Europe, she said. While the good earthworms enrich and aerate the soil, the crazy jumping worms “damage the soil and take out nutrients.” Their excrement changes the pH of the soil, leaves it granular, not smooth and fluffy. The damaged soil is unable to retain water, “it’s like pouring water through sand,” she said.

Rebecca Pinder, PhD, assistant professor of biological sciences and Conservation Club co-advisor at Columbia-Greene Community College said by email that there are likely multiple species of the crazy jumping worm “genus locally, and differentiation of each species can usually be done only with microscope work.”

Dr. Pinder, who has been working with these worms “for quite a while” said not only can they “actually jump and clear the ground, they also exude a slime that deters predators. I have actually had one of them shoot this at me from its mouth and the fluid flew over my shoulder.”

Arriving here just a decade or two ago, the crazy worms prefer “urban ecosystems,” said the professor, “but when they make it to forested habitats can cycle leaf litter much too fast, and alter habitat for other soil invertebrates and amphibians (salamanders). This significantly alters the forest floor community and has been linked to declines of sensitive plant species.”

The crazy worms are hermaphrodites, according to Master Gardener Peterson, they do not need a sexual partner to reproduce. They live from June through October, but during that time reproduce twice, compared to the good worm’s one time.

She said crazy worms have many times more body segments, which look like circles or rings, than normal earthworms. Connected to the body segments are “hairs,” which are the worm’s mode of movement. Since the crazy worms have many more hairs per segment they slither much more quickly than common earthworms and often appear to “rear up on their bodies,” said Ms. Peterson.

Other than physically removing the crazy worms from the soil along with the egg cocoons under the soil, there is no product on the market to specifically eradicate them, she said.

The other scourge becoming more evident now are brown marmorated stink bugs (Halyomorpha halys). These bugs are about an inch long and look like they have a shield on their backs.

They are “nasty little buggers,” said Ms. Peterson. They cross every aspect of fruits and vegetables. While apple maggot and cabbage worm attack specific targets, “stink bugs are not selective, they take a taste of this and that.”

Currently, stink bugs are looking for a warm place to overwinter and that may mean… your house.

Applying caulk to cracks around doors and windows will help keep them out, but once they are in, the best solution is to vacuum them up, said Ms. Peterson. “They are not fast movers.”

The bugs only emit their trademark “acrid smell” when they are squashed, so try to keep them intact as you tie them up in a garbage bag, she said.