ANCRAM—Hops are perennial plants that grow up a trellis to a height of 18 feet. The fruit of the plant, also called the flower, is primarily used to flavor beer, but is also used in fragrances and as an ornamental.

Hops are grown mainly in Oregon, Washington and Michigan in the U.S., and are now experiencing a resurgence in New York State—mostly in the Finger Lakes and Syracuse. A closeup of a hops fruit or flower. Hops sell for $15/pound. Photo by B. Docktor

But a new hops, grains and oilseed growing operation can be found right here in the southeast corner of Columbia County on 50 acres of the old Bryant Farm at the corner of Roche Drive and Route 82.

Stuart Farr is the owner/operator of Hudson Valley Hops and Grains, which was USDA certified organic in July 2017 by Northeast Organic Farming Association of New York (NOFA-NY).

Mr. Farr told The Columbia Paper this week, he used to be a grain farmer in England 30 years ago. He said he wanted to get back into farming but wanted to grow something he had not grown before and hops were his choice.

The hops yard at the farm is only an acre, but on it are 1,000 hop plants of three varieties: Cascade, Chinook and Newport.

The hops were planted three years ago and this year’s late summer harvest was his second, he said, noting that the hops root stock will live 30 to 40 years.

The farm also produces grains and oilseeds, such as canola and camelina.

The hops crop is “extremely labor intensive,” said Mr. Farr, as everything must be done by hand. In April, two lengths of coir rope for each sprouting bine must be hand strung (2,000 of them), and each bine has to be hand-trained up the ropes. All weeds are pulled by hand.

“Irrigation is provided from a well with a solar powered submersible pump which feeds a tank atop a hill whence water is gravity fed to the hop yard drip lines,” according to the Hudson Valley Hops and Grains website.

In late summer at harvest time, each bine is cut first on the bottom to a height of two feet and left to dangle. Then standing aboard an elevated platform above the hops wagon, Mr. Farr cuts the top of the rope and lowers the clinging bine onto the wagon.

The two feet remaining at the bottom of each plant will die back over the winter and the roots will hibernate.

Once the wagon is loaded, it is moved to the hops harvester, where the bines are fed into the machine, which picks off the fruit.

Mr. Farr said the harvester machine, to quote a popular English phrase, “does exactly what it says on the tin,” was developed by a husband and wife team and is manufactured in Pennsylvania. 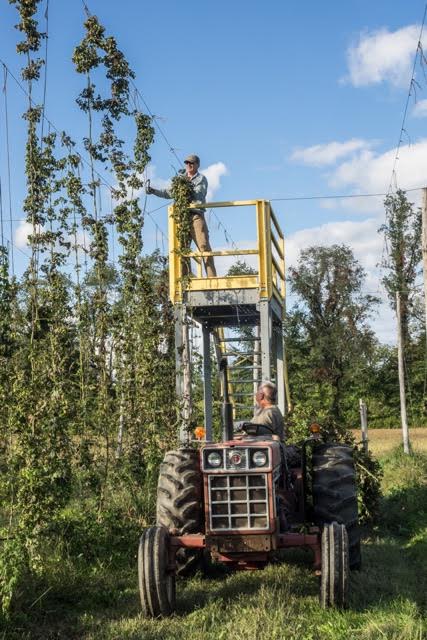 Stuart Farr on the elevated platform cuts the rope which the hops cling to. He then drops the bine down to the hops wagon below. The bottom of the plant was cut earlier to leave the plant dangling. Photo by B. Docktor

The hops are then dried, cleaned, crushed in a hammer mill and made into 3/8-inch pellets, which are vacuum-packed and sent off to local markets, such as brewers, malting houses, flour mills and livestock farms. The going rate for hops is $15/pound, said Mr. Farr.

One hundred and twenty years ago, all U.S. hops were grown in New York state because this is where Europeans settled and grew their crops, he said. But hops were susceptible to fungal disease and then Prohibition came along and “the industry just died.”

While most of the hops produced in the U.S. today come from the Northwest, a change in state law, which has made it easier for farms to add on breweries have accelerated a resurgence over the past five years, he said.

Mr. Farr conducts his hops operation with the help of his wife, Sarah, and former farm-owner Terry Bryant, his wife Debbie and their son, Steve.

Mr. Farr said he and his wife are currently building a house on the farm, but for now live in Brooklyn.