CHATHAM—Chickens and amphibians have a few things in common.

They both lay eggs and they both cross the road to get to the other side.

But unlike chickens, amphibians have a bunch of humans willing to go out at night in the rain to help them make it safely across.

It’s part of the state Department of Environmental Conservation’s (DEC) Amphibian Migrations and Road Crossings Project and it’s happening here in Columbia County and up and down the Hudson Valley in 10 counties from Rensselaer to Dutchess on the east side of the Hudson River and from Albany to Ulster on the west.

While chickens aren’t particularly known for nocturnal jaywalking—amphibians are—as anyone who has encountered a wet road alive with hopping frogs on a spring evening can attest. Leaping lizards!

In a recent press release the DEC announced that the reason for all these ambulating amphibians is that the annual breeding migrations of salamanders and frogs are underway. 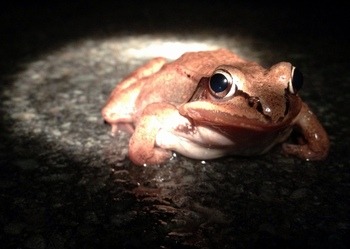 “New York hosts an incredible array of amphibians, and an even more amazing volunteer network that helps ensure their survival each spring. As the state’s Wildlife Action Plan identifies road mortality as a significant threat to frogs, toads and salamanders, I encourage all New Yorkers and visitors traveling through our state to keep an eye out for amphibians, and our committed community of volunteers helping them cross the road,” DEC Commissioner Basil Seggos said in the release.

With 85% of the state’s amphibian species living in the Hudson Valley, “these volunteers are helping ensure this significant regional biodiversity remains part of the state’s rich heritage,” he noted. Now in its 10th year, more than 300 project volunteers have assisted more than 9,000 amphibians cross the roads in New York State.

Locally, John Horton, 26, of Red Rock, a hamlet in Canaan, is part of the amphibian road patrol effort. Mr. Horton is the volunteer programs coordinator and public lands steward for the Columbia Land Conservancy (clctrust.org.) He also helps organize volunteers. 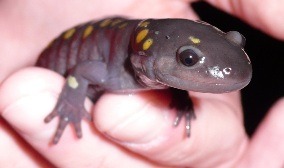 The right time for volunteers to go out on their mission “is very weather dependent,” said Mr. Horton, noting he and about five others went out a couple of weeks ago on a rainy night between 8 and 9 p.m. when the temperature was about 50 degrees. The volunteers, who can go out in groups or independently, are trained primarily about safety: to have a flashlight, wear reflective clothing and rain gear. They also learn to record and collect data about weather conditions and temperature, location, and get a count of every amphibian they see, dead or alive. Also part of the training is the safe handling of amphibians. Volunteers must be sure their hands are clean and free of lotions or perfumes as amphibians have sensitive skin; also to be gentle and make sure to pick them up and put them down in the same direction they were headed, said Mr. Horton.

Operating on instinct, when the ground begins to thaw in late winter and early spring, the amphibians, such as spotted salamander and wood frog, “emerge from underground winter shelters in the forest and walk overland to woodland pools for breeding. In New York, this migration usually occurs on rainy nights in late March and early April, when the night air temperature is above 40 degrees Fahrenheit. When these conditions align just so, there can be explosive, ‘big night’ migrations, with hundreds of amphibians on the move, many having to cross roads,” according to the DEC press release.

The shallow woodland pools to which the amphibians are en route, sometimes called vernal pools, are temporary—filled with water in the spring, but dry in the summer.

Since the amphibians journey to these pools to lay their eggs, they must do it quickly because in a few months, the pools will be gone, noted Mr. Horton.

Volunteers choose less traveled stretches of road to avoid traffic and use wetland data maps “to make a best guess” about where to go. “Potential hot spots will have a wetland on one side of the road and woodland on the other,” he said.

“Migration distances to woodland pools can vary from a few hundred feet to more than a quarter of a mile…often cross[ing] roads and long driveways, leading to mortality of slow-moving wildlife even in low traffic areas,” according to the DEC website.

Why should humans care about whether frogs croak while trying to make it across the road?

“We want to help them reach their destination safely,” Mr. Horton said, adding, “amphibians are indicator species, they have sensitive skin and live near water, if the amphibian population is healthy the water quality is good; they eat bugs and keep the insect population in check; and I think they’re cool, if that counts for anything.”

To get involved with the Amphibian Migrations and Road Crossings Project contact Mr. Horton at or learn more at http://www.dec.ny.gov/lands/51925.html