HUDSON—It is illegal to buy, sell or possess fireworks in Columbia County.

A Local Law dated June 14, passed by the Columbia County Board of Supervisors declares that fireworks “pose a significant risk to public safety.” For those convicted, fines of $100 to $750 will be imposed depending on the level of the offense.

But will this stop people from buying and setting off firecrackers in the backyard?

Just this week Mr. Poster sent out notices that the local United Way’s next fundraising endeavor will be the Phantom Fireworks Stand.

For 13 days starting Friday, June 22 and ending on the Fourth of July at the United Way office, 1136 State Route 23 in Catskill, (Greene County), a straight shot over the Rip Van Winkle Bridge about 200 yards, volunteers will be selling fireworks under a tent.

According to Mr. Poster’s message, he has sent out 21,500 announcements advertising the Phantom Fireworks Stand.

Local radio personality Bill Williams will play a 30-second radio ad on three stations advertising the fireworks sale starting this week through the Fourth of July.

An estimated 12,000 cars per day have seen the Phantom Fireworks banner on Route 23 for the past two weeks. “Being so close to the bridge—and no fireworks sales in Columbia County—United Way of Columbia and Greene Counties stands to raise a lot of money!” he wrote. 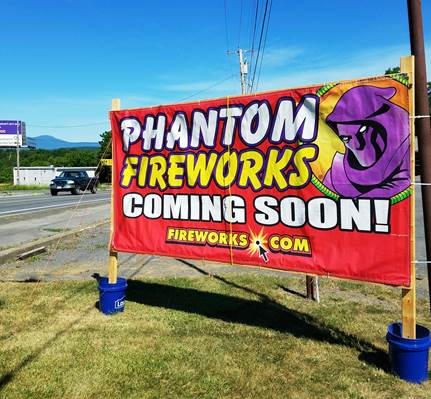 Reached by phone this week, the exuberant Mr. Poster agreed buying fireworks in Greene County and then transporting them into Columbia County means people are taking a chance. But it’s pretty well established that they do shoot off fireworks and “if they don’t buy them locally, they go get the good stuff in Pennsylvania,” he noted.

Phantom Fireworks, based in Ohio with outlets across the country, has provided Mr. Poster with everything he needs—the tent, the fireworks and proper storage containers—all he needs to do is recruit enough volunteers to sell them.

“I am reaching out for volunteers to help me… The volunteers will really do nothing more than walk customers through the tent and assist in selections, and maybe help move some light boxes… not much selling and only one cash register assignment.

“The tent needs about five people each day (maybe a couple more after work) until the last four days when it gets really busy…. I need help after work, during the day and in the evenings around suppertime,” he wrote in his email message.

The merchandise will include “sprays, fountains and little fun stuff… no mortars.There is no danger to anyone,” he said.

Columbia County Board of Supervisors Chairman Matt B. Murell told The Columbia Paper by phone this week that he and others voted in favor of the fireworks law after consulting with the Fire Advisory Committee and other fire officials, who are all opposed to the sale of fireworks because they “are dangerous and cause fires.”

Mr. Murell said law enforcement will deal with anyone found to illegally sell or possess fireworks in Columbia County, but also noted, “We’re not having any roadblocks.”

The idea of selling fireworks to raise funds for the United Way may sound a bit extreme, but Mr. Poster notes, “the United Way is 87 years old, we’ve had to reinvent ourselves many times to meet our mission.”

“The United Way of Columbia and Greene Counties, Inc. is a volunteer-led voluntary resource development and human service organization. Started in 1932, as the Community Chest of Columbia County, the United Way took its present title in the 1990s and has worked since then to collaborate with a cross-section of volunteers and agencies, both public and private, in a two community-wide effort to efficiently support and deliver needed human service programs,” according to the website www.uwcg.org

The organization’s mission is to “maximize and focus resources to improve people’s lives by activating the caring power of our community.”

With the loss of so many manufacturers and other workplaces, the organization’s longtime workplace/employee campaign model of fundraising “needs help,” said Mr. Poster.

Recently, Mr. Poster said he spent two-and-a-half hours standing in the middle of the intersection of Routes 81 and 9W in Coxsackie conducting a coin drop (drivers stop and drop coins in a bucket), which raised $1,000.

Part of the reason is the ALICE (Asset Limited, Income Constrained and Employed) Report.

The report found that 39% of the population of Columbia County and 41% of the population of Greene County live at the poverty level or below, which Mr. Poster said, “makes my mission pretty important.” Of the combined 111,000 residents of Columbia and Greene counties that means 40,000 are living at or below the poverty level. Those 40,000 people represent 25,000 families, he said.

The 211 program, which allows anyone to dial 2-1-1 seeking help for anything from the urge to commit suicide, involvement in domestic violence, substance abuse, tax preparation, transportation to a doctor’s appointment or where to find the nearest food pantry, is a United Way program. A trained call specialist with access to a data base of 1,700 sources of help will answer the call.

Mr. Poster took possession of $80,000 worth of fireworks this week and has five fire extinguishers. He said his biggest fear in connection with the fireworks sale is that he won’t find enough volunteers to help out and the line of people waiting to buy fireworks will stretch across the river.