The latest culprit on the long and getting-longer list of these invasive species is spotted lanternfly (SLF). 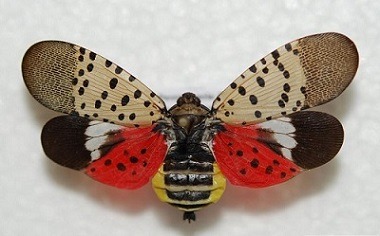 An invasive species is any living organism—non-native or alien to an ecosystem that when introduced causes harm to the economy, environment or human health, according to www.invasivespeciesinfo.gov.

The situation is so dire that New York State has invented Invasive Species Awareness Week (ISAW) which it will celebrate for the fifth year, July 8 through 14.

This year ISAW is focused on the theme “What You can do to help stop the spread,” and the state Departments of Environmental Conservation (DEC) and Agriculture and Markets encourage partners, like Cornell Cooperative Extension of Columbia and Greene Counties, (CCE) to get involved in the campaign to raise public awareness about invasive species by providing people “with the knowledge, skills and motivation to protect the state’s lands and waters from the negative impacts of invasive pests,” according to a joint press release.

Not only does the government want people to get educated about invasives, it wants them to report and document sightings of them.

Easy to see as an adult, the spotted lanternfly is no shrinking violet. The wings of an adult are eye-catching: with grayish with black spots on the upper portion, and red with black spots and a dark area with a white stripe on the lower portion.

Adults appear in July and are an inch-and-a-half wide.

They hail from Asia and while officials believe they are not yet established here in New York, one of their favorite foods, tree of heaven, another invasive, grows all over the place here.

Master Gardener Gerry Weber at the Cornell Cooperative Extension of Columbia and Greene Counties told The Columbia Paper this week that SLF has been found in Pennsylvania. They attack vineyards, orchards, fruits and vegetables. The tree of heaven that lanternflies frequent has compound leaves and likes to “grow where nothing else will.” And while he knows of nothing to combat lanternflies once they arrive, he said if their egg masses, brownish-gray in color, are discovered, they should be scraped off the surface they are on with a credit card and put into a zippered-top plastic bag with some rubbing alcohol to kill them.

DEC literature on the SLF says they can jump and fly short distances and “hitch rides to new areas.” They lay their eggs on vehicles, firewood, outdoor furniture, stone and are inadvertently transported.

A master gardener for 18 years, Mr. Weber said after retiring from a career as an electrical engineer, he wanted to do something different. At CCE people come to him with questions about their gardens and yards. The most recent local scourge he has encountered is crazy jumping worms or snake worms, which caused the halt of the master gardeners’ own annual plant swap for fear of spreading the worms.

Mr. Weber cautions against buying garden mulch in bulk and says once a jumping worm infestation is found, the area should be covered with black plastic to use “solarization” to wipe them out. He said unlike native earthworms, these invaders do not borrow deeply into the soil, but stay in the top one or two inches where they deplete the soil and “eat all vegetation.” Once infested, the ground appears bare, he said.

In addition to tree of heaven, the lantenfly feeds on grapevine, hops, maple, walnut and fruit trees among others.

DEC officials believe the insect will eventually get here and will “pose a significant threat to New York’s agricultural and forest health.

“Adults and nymphs use their sucking mouthparts to feed on the sap of more than 70 plant species. This feeding by sometimes thousands of SLF stresses plants, making them vulnerable to disease and attacks from other insects. SLF also excrete large amounts of sticky ‘honeydew,’ which attracts sooty molds that interfere with plant photosynthesis, negatively affecting the growth and fruit yield of plants. New York’s annual yield of apples and grapes, with a combined value of $358.4 million, could be impacted if SLF enters New York. The full extent of economic damage this insect could cause is unknown at this time,” according to DEC. A close-up of a Tree of Heaven, the Spotted Lanternflies’ favorite abode. Photo credit: John Thompson

Ms. Wyman said by email, “Currently there are no active infestation in New York, although there was a dead SLF found in Delaware County last December, SLF is an ‘early detection species’ for Catskill Regional Invasive Species Partnership (CRISP), meaning we want folks to really be on the lookout for this pest, as early detection usually means a greater chance for effective management. This species is particularly problematic, as it can reproduce on a wide variety of surfaces and impacts a wide range of commercially important products, such as apples and grapes.”

As part of ISAW Cornell Cooperative Extension of Columbia and Greene Counties hosts a free invasive species overview program Thursday, July 12 from 2 to 3:30 p.m. to familiarize people with the invasive species in this region as well as early detection species that are emerging threats to local ecosystems. This free program takes place at CCE’s Agroforestry Resource Center, 6055 Route 23 in Acra (Greene County). Register online at https://reg.cce.cornell.edu/invasivesoverview_210 or call 518-622-9820 x0.

One of the statewide events happening this year is the “Invasive Species Mapping Challenge” from July 5 to 19. DEC and iMapInvasives are expanding the annual Water Chestnut Chasers Challenge to include a new competition for reporting jumping worms. The aim of this friendly competition is to teach citizens how to identify, survey and report these invasives, while gathering data for the state’s invasive species database. Prizes will be awarded to those who report the greatest number of positive and negative observations for each species. To learn how to participate and sign up for an informational webinar visit www.nyimapinvasives.org/Training/2018-isaw-webinar. To find other ISAW events visit https://stoptheinvasionny.com/calendar-of-events/

Anyone who sees spotted lantern flies should contact the local Partnerships for Regional Invasive Species Management (PRISM,) John Thompson, 845-586-2611, ; or CCE office, 518-828-3346, www.ccecolumbiagreene.org or report it directly to the DEC, www.dec.ny.gov or iMapInvasives www.nyimapinvasives.org

“Whether it’s removing invasive seeds from boots before and after hiking; using native plants when gardening and landscaping; or using local firewood to prevent the spread of forest pests and diseases, we can all do our part to stop the spread,” says the DEC release.