‘She Loves Me’ / Theater Barn

The ’60s musical “She Loves Me” reeks of quality. It is always aromatic.

The genius parfumerie-creators seem to have moved this show along without breaking a sweat. Lyrics by Sheldon Harnick are witty, character-right and inventively crafted. Music has rolled tunefully from Jerry Bock with a sophistication that is never self-conscious or egotistical. (And thank goodness, it is never obliged to thump its way to audience id.) The book by Joe Masteroff is gently funny and simply brilliant. The story is enough to give you renewed faith in humankind and, surprisingly, all of its elements are stirred together without even a spoonful of sugar.

The production at Theater Barn is part of an especially well-chosen musical season, and it exposes the good stuff of “She Loves Me”–while allowing some major missteps.

Misstep number one is the puny, synth-sound of “the band.” The band (keyboard, bass, drums) never supports the singers. Singers are left delivering the arc of their songs on their own–while the band snoozes in the next county. The program says there is a bass player, but beyond the proscenium, it is mostly non-existent. Sometimes the drums overwhelm the rest of the orchestration. This is all so fixable. Somebody please sit out front and make adjustments.

The second misstep is over-choreographing by director Kelly Shook. Bodies flounce and flail with unnecessary exaggeration in almost every number. Her approach gilds lilies and petunias–in fact, the whole musical garden. The problem seems to stem from a mistrust of basic materials; and this show has basic materials!

But guess what? It’s hard to kill “She Loves Me” if you have a cast. Theater Barn has a cast, so the show works anyway. (It could so easily go beyond “working” to “thrilling.”)

The very musical and very truthful Alexandra Foley brings a welcome grown-up emphasis to Amalia. In addition, she can execute a beautiful high B in the famous “Ice Cream” show-aria, making it a moment of discovery rather than just an impressive high B. She plays the words of the lovely “Will He Like Me?” with touching simplicity. Furthermore, the actress seldom flails or flounces.

Patrick Scholl gives Georg a kind of boyish sweetness that is attractive if not directly out of the script. He celebrates the title song with vocal warmth and gusto, even without help from the band.

There are some very tasty supporting players: Though early on John Trainor has some singing discomfort, he evolves into a funny, moving, always believable Mr. Maraczek. As Ilona, Alexa Renee is tart, acerbic, and cute. She belts out her “Trip to the Library” sans the nasal unpleasantness of most belters. The delivery boy Arpad is played with charm, smooth-moves, and an effective tenor voice by the handsome Ali Louis Bourzgui.

Best of all the supporting players is Allen E. Phelps (who is also artistic director of the theater). Phelps sings well; and he gives the character of Sipos unusual human generosity of spirit and warmth. Furthermore, he is the only supporting actor who is able to disguise and integrate the over-choreography and make it work for his character. He is also able to stand selflessly through Ilona’s big solo while remaining utterly, humanly with her.

Costumes by David Louder are pleasing and right. He dresses Foley with an especially keen eye. The lines of her skirts are graceful and flattering, and when she appears for her date in simple black, her look is especially impressive. Patrick Scholl as Georg and Alexandra Foley as Amalia play the leads in “She Loves Me” at The Theater Barn in New Lebanon through August 19. Photo contributed 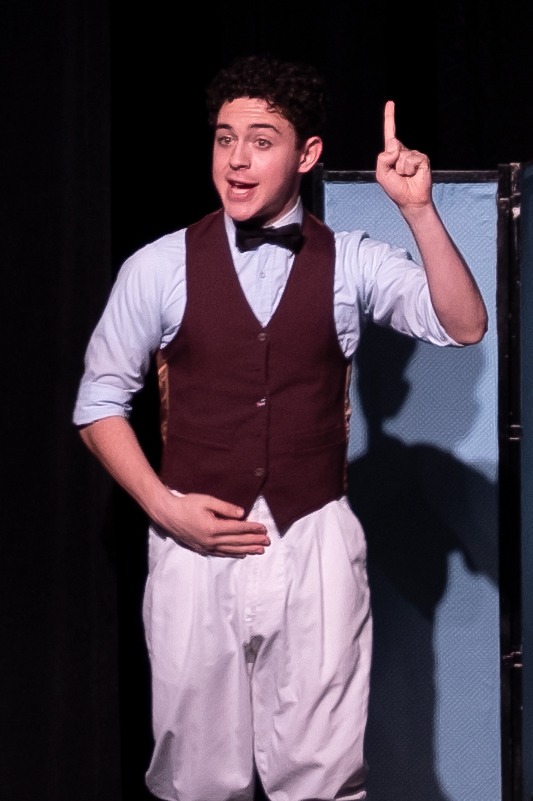 Ali Bourzgui is Arpad in the musical “She Loves Me” at The Theater Barn in New Lebanon through August 19. Photo Contributed