GERMANTOWN—“This is a twisted path we’re going along,” observed Kaare Christian, co-chair of the Germantown Waterfront Committee, about the Amtrak proposal to install gates and fences at eight locations along the Hudson River from Rhinecliff to Stuyvesant, including Germantown.

The prospect that Amtrak might impose greater limits on access to the Hudson River waterfront led five town supervisors, including the chairman of the County Board of Supervisors, to write to the New York State Department of State (DOS) urging that the comment period on the fence plan be extended. If the railroad does not take steps to address their concerns, they want the state to block the plan.

The riverfront towns discovered Amtrak’s plans early this year. Letters were written during a public comment period. A rally took place on April 22 at the Germantown waterfront. In response, Amtrak agreed to hold public information meetings. 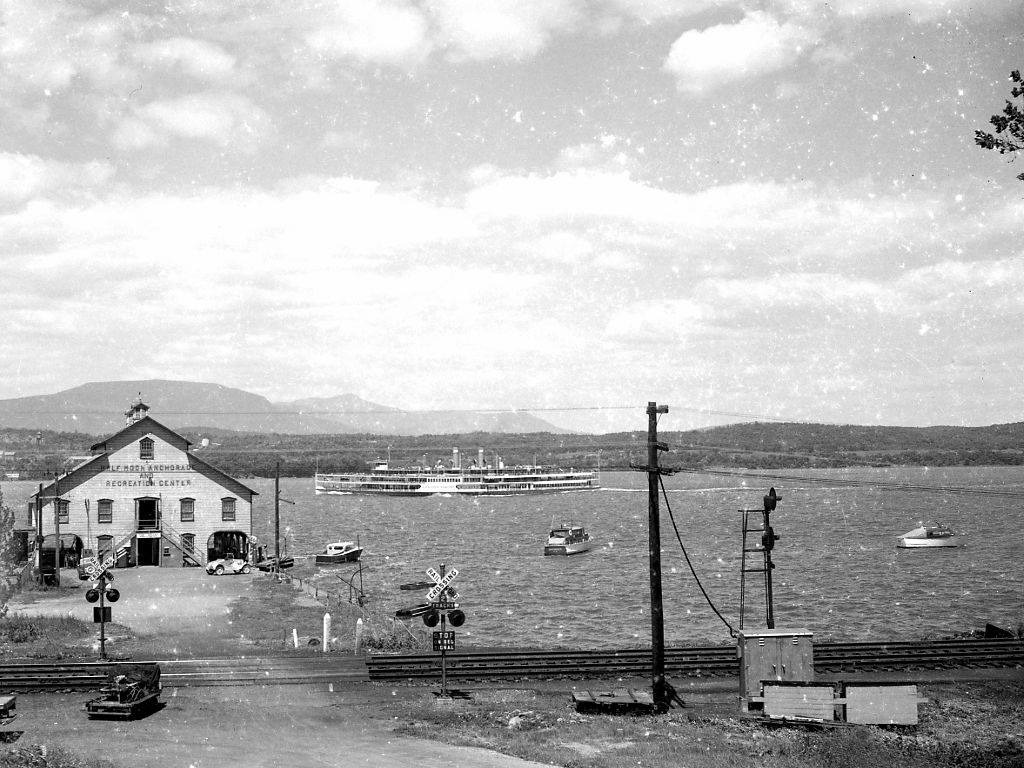 A photo from what appears to be the 1930s shows the railroad and recreational uses of the riverfront coexisting in Germantown. A Dayliner passenger boat plies the river in the background. The fence proposed by Amtrak would limit access to the river. Photo by Howard Gibson

Almost six months later, the fences and gates are not installed. The public meetings have not taken place. The meetings are now proposed for Stuyvesant and Hyde Park (welcoming Hyde Park into the fray). Germantown, in the form of its supervisor, Robert Beaury, and its Waterfront Committee, co-chaired by Mr. Christian and Jen Crawford, objects to holding meetings relatively far from his town and proposes a meeting in Germantown.

Germantown did host a meeting of stakeholders August 24. Present were representatives from Amtrak, the state Department of Transportation, Scenic Hudson and Congressman John Faso (R-19th). Fire Chief Michael Lawson, Supervisor Beaury, Ms. Crawford and Mr. Christian were there too.

“We talked about the fencing/gates proposal,” Ms. Crawford reported in an email to the Waterfront Committee. “Amtrak expressed their main safety concerns and explained their preliminary plans. We pointed out some of the unique aspects of our waterfront and brainstormed some alternative solutions.”

The meeting was intended as an informal exchange of ideas and a way to initiate better communication between the town and Amtrak, she wrote. No decisions or commitments were made, and no dates were set for a public information meetings.

A week later Mr. Beaury met with two DOT staff members, who inspected the Kellner Community Activity Center as a potential venue for a public meeting. “I have not heard anything since,” he wrote in an email Monday.

This decision “raises issues about transparency and the nature of the relationship between Amtrak and DOS,” said the letter. Signing it were Supervisors James Guzzi (Livingston), Ron Knott (Stuyvesant), Raymond Staats (Clermont) and Matt B. Murell (Stockport), chairman of the county Board of Supervisors).

The full letter can be read at gatesgate.org. The Waterfront Committee also hosts an active Facebook page, with news and photos.

(As this story went to press, the manager for the Amtrak fence project announced that public meetings would be postponed until early 2019 and that Amtrak would “refine the project” and work with riverside town supervisors.)