GERMANTOWN–The school district’s Palatine Heritage Days are a themed two-day program developed by Germantown Historian Susan Raab, a Germantown School District teacher, and funded by the Germantown History Department in commemoration of the arrival of the Palatines in October 1710. This year’s theme is river ecology.

The inception of the program came on the heels of the town’s 300th anniversary of European settlement in 2010. With the sun shining and cool autumn temperatures Mary Mitchell’s 3rd grade class listens to the instruction being given by Barry Keegan in seining. Learning about and helping make fishing nets was an essential job for Palatines including the children.

The program does more than commemorate the Palatine immigrants’ arrival from Germany, some with stops in between. Most importantly it’s “an opportunity for learning in conjunction with science, ecology, art, math, music and conservation or anything else the kids can connect with,” said Ms. Raab. 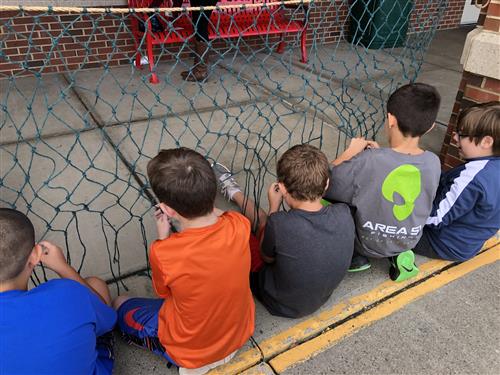 Germantown students knot together strands of jute to make fishing nets like the ones used three centuries ago by Palatine settlers. Photo contributed

Two of the four red brick columns in front of the school have thick rope tied from one to the other and from where rows of blue jute twine hang like stretched-out fingers. The jute is tangled in the knots that make the diamond shapes in which the fish get trapped. Fishing was a major food source for the Palatines.

Part of this year’s program included Hudson River Sloop Clearwater, Inc. founded by the late Pete Seeger. Clearwater is a non-profit organization that strives to protect the Hudson River, wetlands and waterways through advocacy and education. For the Germantown students Clearwater introduced the importance of river health and conservation through a hands-on activities.

The second part of the morning is held at the Parsonage. Student transportation is provided by volunteers from the Germantown Highway Department whom Ms. Raab says she “could never thank enough!” In addition to Clearwater, she also enlists the services of fishermen, blacksmiths, artists and musicians as is the case this year.

Students in Jessica Brannen’s 5th grade class are led single-file into the large, upstairs living space and instructed to sit on the floor by rows. They are eager and curious though this is their sixth year attending the event. Today’s musical-historic presentation is lead by Linda Russell, who performs as an early American balladeer wearing a period dress. On her lap sits an instrument that looks like a small guitar, called the mountain dulcimer.

Ms. Russell begins by playing some cords. “Boys and girls, I am going to lead you through history through music,” she says with a big smile. The students are mesmerized as she plays and sings songs native to the Hudson Valley. Ms. Russell also played the guitar, hammered dulcimer and the penny whistle, while including historical anecdotes related to a particular song or instrument. The students participate in singing and enthusiastically raise their hands and ask questions.

The day ends with clapping and an apple on the way back to school.