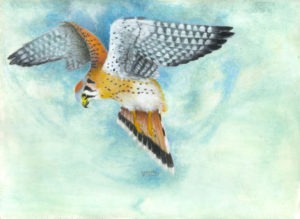 Each of CLC’s public conservation areas (PCAs) features a unique mascot inspired by an animal that lives at the site. Overmountain’s mascot is the American Kestrel. Artwork by Roberta Wilson

The new Overmountain Public Conservation Area is also the largest in the county, covering 1,700 acres in southeastern Ancram.

Since the Columbia Land Conservancy (CLC) took up the challenge of protecting rural lands in perpetuity, about 30,000 acres in conservation easements have been achieved, CLC Executive Director Peter Paden said in phone interview this week. These are privately-owned lands that remain on the tax rolls with developmental restrictions

Founded in 1986, the non-profit organization’s mission is to “work with the community to conserve the farmland, forests, wildlife habitat and rural character of Columbia County, strengthening connections between people and the land,” according to the website: clctrust.org.

The mission is particularly important in Columbia County, where the county itself has no public parks and relatively little publicly accessible land (it’s mostly privately-owned) compared to neighbors: Berkshire County, Massachusetts and Greene County across the river, Mr. Paden noted.

While “massive amounts” of land in the Berkshires and Catskills are open to the public, there are a few state parks here and they make up only a small percentage of land in the county, he said.

But the public is now welcome to visit the Overmountain PCA, dawn to dusk, every day of the year.

Made up of three areas: Round Ball Mountain, Fox Hill and Kite Hill, the property was acquired by CLC through purchase and donation over several years in three phases. It started with the bargain sale purchase of Round Ball Mountain (about 100 acres) from the Kitchen family, followed by the donation of Fox Hill (about 200 acres) by the Baxt family, and culminating with a gift of 1,300 acres from the Gilmore family

The expansive property with 10 trails follows the ridgeline above the Harlem Valley, boasting spectacular views of the Taconic Range to the east and Catskill Mountains to the west, with the entire Hudson Valley in between, according to a CLC press release about the area.

Notably, it has several hundred acres of grassy fields—habitat for grassland birds—which is in short supply, said Mr. Paden.

In his remarks at the November 10 ribbon-cutting, Mr. Paden told the undaunted, bundled onlookers that in addition to its scenic vistas, the site has abundant forests, grassy fields, clean ponds and streams, healthy wetlands that “provide rich and vitally important habitat for creatures of all kinds; and they function in multiple ways to protect our environment and our health. The property also has several hundred acres of productive farmland and it provides exceptional beauty everywhere you look… these features together exemplify so much of the extraordinary natural world we are so fortunate to inhabit here in Columbia County.”

Speaking on behalf of the Town of Ancram at the opening, Ancram Conservation Advisory Council Chair Jamie Purinton expressed “how grateful Ancram is to have this conservation area. Between the Taconic State Park, CLC and Dutchess County conservation easements and public land, Ancram has nearly 10,000 acres in conservation—or more than one third of the town.”

Overmountain’s rich biodiverse habitats include “shrub land swamps, hardwood swamps, wet and upland meadows, seeps and springs, old fields and ancient forests” which “provide a home for many rare and declining species that have been surveyed by Hudsonia and the Farmscape Ecology Program, including Robin’s plaintain, showy goldenrod, the gray marvel moth, the Fowlers toad, bobolinks, northern harrier and the mascot American kestrel,” Ms. Purinton noted.

Sometime in the future, said Mr. Paden, “we hope we may also be able to create a gathering space for the community and have opportunities to advance research in the ecological sciences and resource management and participate in regional ecological data collection.” The Overmountain PCA (public conservation area) offers sweeping views of the Taconic Range to the east and Catskill Mountains to the west, with the entire Hudson Valley in between. Photo courtesy of the Columbia Land Conservancy

The Kite Hill entrance is at 138 Catalano Road. Learn more about the Overmountain Public Conservation Area on the CLC website at these links: