“That’s good news,” he told the board.

He said that there has been a decline in children born in the district but it was not as steep as the decline in other parts of the state. He said the decline in enrollment is not just being felt in upstate counties but also in districts he works with closer to New York City in Westchester County.

He also said that Ichabod Crane has a high percentage of “kids born somewhere else that came here and enrolled in your kindergarten.” He said the district has about 4% more kindergarten students enrolled than were born in the district.

He talked about home ownership in the district being high and the fact that most homes have three or more bedrooms, which could mean they are bought by families. As part of the report he looked a jobs in the in district, saying that the Capital District is a “premier” place for work.

He said the area where there was the most drop in enrollment was in the high school, though he did say the district did not have a major “pupil flight” to private schools unlike other districts in the area. He said that most of the time a student leaves a district for another school district nearby.

Dr. Seversky, a former Madison Oneida BOCES deputy superintendent who has conducted demographic studies for school districts around the state, said that when the district downsized by closing two school buildings in 2011 based on enrollment data at that time, school officials made the right change for the student enrollment predictions going forward.

Board member John Antalek said that looking at the updated enrollment study shows the connection between the quality of the school district and the value of homes in the district. Since downsizing to three school buildings the board has not undertaken a major capital improvement project with a tax impact on the residents. But the board is now proposing a $27-million capital improvement project that includes work on all three school buildings. Residents will have the opportunity to vote on that project December 12. 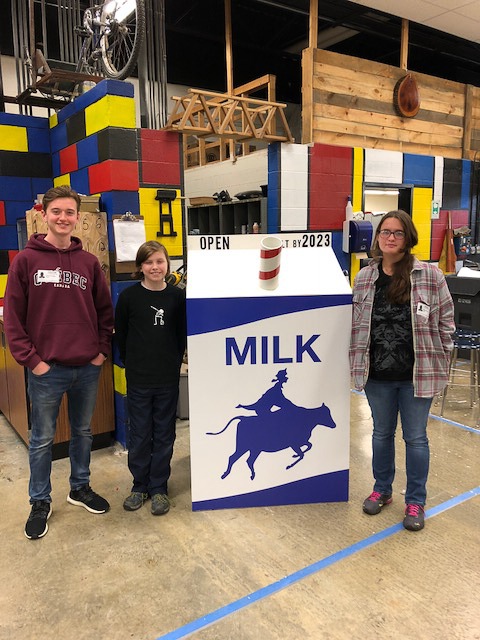 Brendan said that since the program of recycling the cartons started the volume of trash at the middle school has substantially decreased.

“Because of Brendan we’re going to be doing it K through 8,” said Assistant to the Acting Superintendent Suzanne Guntlow of the recycling program. Brendan will be touring classrooms in the primary school with Principal Andrea Williams to explain the program to the students in that building.

Board member Jeffrey Ouellette said that the board would “look at an environmental policy.” Board members also praised Brendan for making the change in the schools. Ms. Guntlow reported that the technology class has made a large recycling bin that looks like a milk carton where students can dispose of their used cartons

• Michael Brennan, the district’s business manager, said that the Office of the State Comptroller conducted an audit of the district’s finances, looking at the period of July 1, 2016 to November 9, 2017 and focusing on procurement. He stressed that the state had found “no signs of fraud or theft.” He said there is still an exit interview with the state and a process to be worked through before the details can be made public. He said there were “very minor findings,” and he would give the board a full report at a later date

• After the board meeting, a letter was sent home with middle school students announcing that Principal Tim Farley was taking a leave of absence to recover from an injury sustained a few months ago. The district has hired Douglas Kelley as Interim Principal until January 2.

The next regular Board of Education meeting will be December 4 at 7 p.m. in the High School Library.