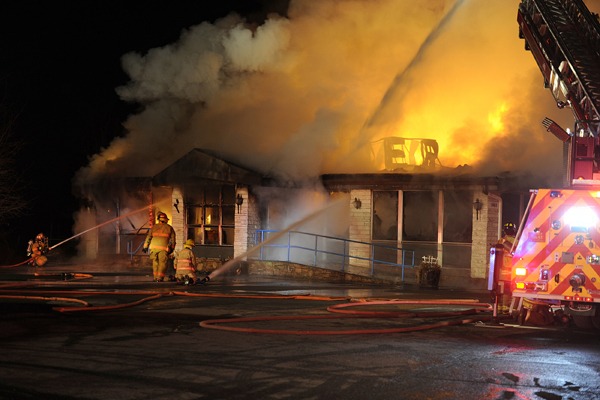 AUSTERLITZ–O’s Eatery, a diner at 309 Rigor Hill Road along the east side of the Taconic State Parkway, burned down Saturday evening, December 8.

The call first came in to the Austerlitz Fire Company and the Chatham Rescue Squad—originally reported as an appliance fire at 6:25 p.m. That was updated to a deep-frier fire at shortly after 7.

A local firefighter who declined to be identified because he was not on duty said he happened to be eating dinner with a group of other off-duty firefighters at the restaurant when the fire broke out. He said he heard a commotion in the kitchen and recognized the sound of a fire extinguisher.

Looking in the direction of the kitchen, he saw that it was in flames. He and his colleagues stood up and told people to leave the restaurant. He said there were 15 customers in the restaurant in addition to the employees.

The firefighter said that the flames went through the roof in three minutes.

No injuries were reported. Photos of the parking lot show no damaged vehicles.

Fire companies were back in service at 2:26 a.m. Sunday, December 9.