GIVE US THE DICKENS. We humans deserve it. Walking the Dog Theater, Inc. provides.

In a low-ceilinged room near the top of the Hancock Shaker brick building, David Anderson performed Dickens’ “A Christmas Carol,” stripped of everything–everything, that is, but story. (The event is now moving to Warren Street in Hudson.)

Anderson’s solo performance was very lean even when I reviewed it years ago in a blue-cocoon space with theater lights, costumes, and occasional live music. Yesterday, it was just David and his spindly Shaker chair being everybody, while a gray, wet afternoon moved in slowly to give his outline an appropriate blur. 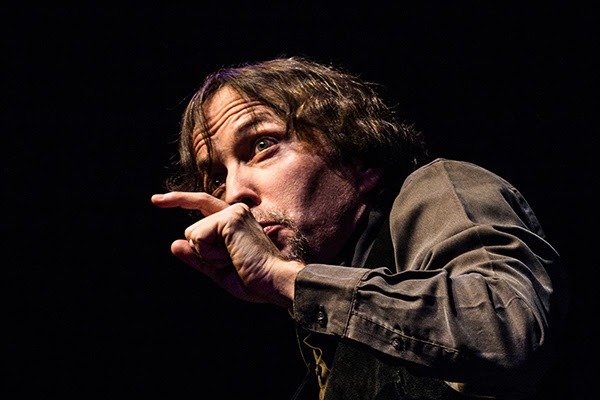 At the beginning he asked us (the audience) if we were familiar with the story. Everyone was, even the two very young boys in the row in front of me. Why, David asked, do we want to hear it again and again when we know what happens?

Some people probably return to this particular Dickens for the astonishment this actor usually evokes. In part, the lure has to do with the clarity and variety, and the melodic rhythm of the actor’s body, which clicks easily from character to character. In part, it has to do with vocal pitches, growls, and accents. These are a few of the extraordinary techniques that come from some true place in Anderson to serve story. Audiences return for the story and the art.

Dickens is always clear about loathsome greed, cruelty, and lovelessness. (Too clear, some critics think.)

But when Anderson’s Scrooge has his epiphany, the villain’s body, which has bent toward the earth and looked at death, unfolds and threatens to fly. In the audience, we shed our weary sophistication in favor of goose bumps, lumps-in-throat, and tears that (illogically) feel like sunshine and freedom. The experience remains to the end of the play.

The answer to the actor’s question: We return to Dickens’ “Christmas Carol” to test the possibility of redemption—not to mention to laugh and become absorbed.

If that performance seems like a Christmas present, you may put it under your tree by reserving tickets for one of its iterations, which will move to Solaris, 360 Warren Street, Hudson, December 20 through 24.

Walking the Dog Theater is a professional, not-for-profit theater company based in Columbia County. Find information at www.wtdtheater.org or (518) 610-0909.