Construction work is now underway on the fourth phase of the trail, an eight-mile section which will complete the Dutchess County portion of the trail from the Village of Millerton, Town of North East and link it to Under Mountain Road in Ancram, Columbia County.

Once this section is completed—23 miles of continuous trail will be in place from the Metro North Train Station in Wassaic (Dutchess County) north to Copake Falls (Columbia County.) The milestone is half-way to the goal of a 46 mile-long recreational trail linking Wassaic to Chatham on an abandoned portion of what once was the New York and Harlem Railroad line. 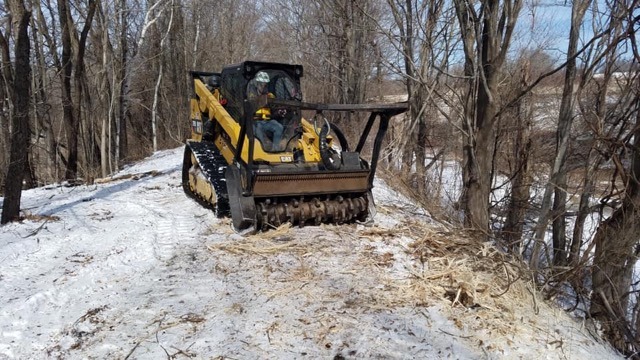 A skid steer with a grinder attachment clears the undergrowth from the rail trail. Photo contributed

The 46-mile finished Harlem Valley Rail Trail “will be one of the most extensive and spectacular rail trails in the U.S.,” according to a press release from the Harlem Valley Rail Trail Association (HVRTA), a nonprofit organization based in Millerton, that has a mission to advocate for the development of a rail trail between Wassaic and Chatham, to encourage safe use of the trail and help maintain completed sections of trail.

Completion of this latest phase is slated for October 2020. The new trail section borders environmentally sensitive areas, such as native wetlands, and requires the installation of about 4,100 feet of elevated boardwalks. Additionally, six structurally deficient bridges within the corridor will be rehabilitated, according to a March 14 press release from Dutchess County Executive Marcus J. Molinaro.

Plans are underway to extend the trail another 23 miles to Chatham. Some trail sections north of Copake Falls are already open to the public.

HVRTA Executive Director Lisa DeLeeuw told The Columbia Paper this week that trail crossings on public roads like White House Crossing and Under Mountain roads will be at-grade crosswalks.

Currently, plans to extend the rail trail north from Orphan Farm Road to Black Grocery Road in Copake Falls involve the construction of a pedestrian bridge over/across Route 22 where there once was a railroad trestle, Ms. DeLeeuw said. The idea of tunneling under Route 22 there has been scrapped. HVRTA is waiting on a federal grant to make that bridge happen. A design for the trail from Philmont to Chatham is already complete, she said.

In Dutchess County, funding for the current phase of the project was approved in October 2018 by the Dutchess County Legislature, the Molinaro press release says.

“The vision of the Harlem Valley Rail Trail Association 30 years ago was ‘Chatham or Bust’, and we are half way there,” HVRTA Chairman Dick Hermans said in an association release about the current section project.

The rail trail has been a welcome addition to neighbors and a driving force for the economy of the area around Millerton. Other communities can benefit from being close to a trail. For more information call HVRTA at 518-789-9591 or visit http://hvrt.org/.

Copake Town Board member Jeanne Mettler delivered the update about the rail trail to those present at the board’s March 14 meeting. She said it’s “good news for Copake.”

In a follow-up comment by email, Ms. Mettler wrote, “News that the Rail Trail will soon extend from Millerton to Boston Corners is so exciting. A biker will be able to ride from Wassaic to Millerton and all the way to Orphan Farm in Copake. This will give an economic boost to every town along the way. Congratulations to the HVRTA. ‘Chatham or Bust’ is becoming a reality.”

Upon hearing the trail will soon stretch from Wassaic to Copake Falls, Copake Councilman Richard Wolf wondered aloud at the meeting, “Does that mean I don’t have to pick up my wife at the train anymore?”