HUDSON–A former school building here, renamed the River House, has been remodeled into studios and offices for artists–especially filmmakers–and has already gotten some tenants, said its owner, filmmaker Tony Stone.

He spoke April 15 at the Hudson Area Library Community Room at a public hearing for a state grant to reimburse some of the costs. “We’re in the final stages of finishing the work and close to functional,” he said.

The building, at 34 Allen Street, was erected in about 1903 to replace a school built in about 1841. It served as a school until 1964, when Hudson’s elementary schools were consolidated. 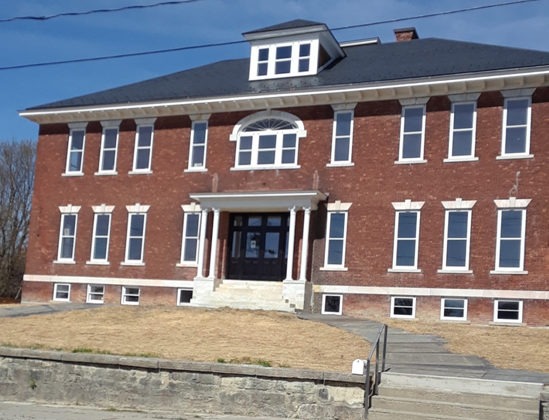 This former schoolhouse on Allen Street in Hudson has been restored and remodeled as a space for production and post production of films made in New York State. It is a project of Basilica Hudson co-founders Tony Stone and Melissa Auf Der Maur. Photo by Jeanette Wolfberg

Mr. Stone said he bought the 19,500-square-foot building five years ago. Reconstructing it cost $1.13 million. Some of the money came from rehabilitation grants from the National Park Service. The state awarded an additional $225,000 in 2017 through the governor’s Regional Economic Development program and Mr. Stone said, “I want to thank the governor for the grant we received.”

But before the state makes this type of grant, the applicant must conduct a public hearing, and for the River House, the April 15 meeting was that hearing. Since work on the building continued while the grant application was pending, the $225,000 will reimburse Mr. Stone for work already done.

In addition to state officials and Mr. Stone, the co-founder of Basilica Hudson, only about four other people attended the meeting, and all had a chance to talk.

“It has been a pleasure to work with this,” said Sophie Henderson, deputy director of Basilica Hudson. It will be good “for many creative entrepreneurs who are moving to Hudson.”

“I think it’s the most fantastic thing in the world,” said Ben Fain, who is reconstructing the Red Barn around the corner from the River House for restaurant and retail space. “It goes along with the Downtown Revitalization Initiative. It will bring in an industry that is not here now.”

Michael Tucker, president and CEO of the Columbia Economic Development Corporation, said the building “advances the revitalization of Hudson.”He added that it “sparks creativity” and predicted “will allow a new industry to take root in the region” and could “indirectly create 100 new jobs.”

More about the River House project is at www.riverhouseproject.com