THE HUDSON ADOLESCENT OFFENDER FACILITY sits close to the city’s busy central business district. But, for the most part, except for its employees who live locally, residents don’t give it a second thought. The facility’s nearly 150-year-old brick buildings have a fascinating but often sad history that, until recently, has been hidden from contemporary notice.

Since 2012, the Prison Public Memory Project (PPMP) has worked with individuals and organizations inside and outside Columbia County to document, interpret and share the history of the prison in its backyard.

The prison opened in Hudson in 1877 as the House of Refuge for Women, the state’s first reformatory for women and, according to some historians, America’s first “gender-specific” women’s penal institution. 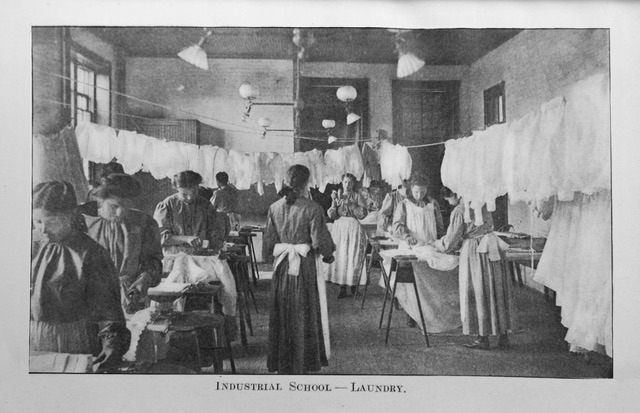 This photo, originally as captioned as “Industrial School–Laundry,” is from a 1907 “Annual Report of the Board of Managers of the New York State Training School for Girls at Hudson.” The Prison Public Memory Project (PPMP) in Hudson has gathered and archived many documents that reveal the history of the facility. Photo contributed

In 1904 the reformatory closed and became the New York State Training School for Girls. Once the largest juvenile detention center for girls in the country, its most famous resident, the great jazz singer Ella Fitzgerald, had been prohibited from singing in the school’s choir in the 1930s because she was black. But not long afterward, spurred by complaints about segregation and ill treatment of black residents, the Training School became an early employer of many African Americans in Hudson.

In 1975, the Training School closed. The next year, the state opened Hudson Correctional Facility, a state prison for men, which lasted until 2016. Next the facility was transformed into its current incarnation, a juvenile detention center with “disciplinary confinement” units for males and females.

Since PPMP’s first set of public engagement events in Hudson in 2012 and 2013, it has partnered with several local organizations and institutions as well as the prison itself, to bring a diverse array of programs to the Hudson Valley, including historical exhibitions, art installations, illustrated lectures, pop-up museums, participatory readings, video and film screenings.

For the most part, PPMP has concentrated on the history of the Training School for Girls because it offered the opportunity to record the oldest living history of the prison in the form of oral history interviews with former employees and people incarcerated there. PPMP also had the good fortune to access some rare primary source documents from the Training School that were in the private collection of Hudson resident Lisa Durfee.

These documents, from the 1920s and early 1930s, include photographs, letters, telegrams, staff notes, intake records, court records and other historically invaluable clues to the social history of the Training School that were found in a box purchased at a garage sale in Hudson. Digitized with permission from their owner, they have now been made available to scholars, artists and the public at large through PPMP’s Digital Prison Archive.

Recently, PPMP has begun to excavate and share the history of the House of Refuge for Women, which accepted young women, ages 15 to 30 (and later 15 to 25), convicted of petit larceny, habitual drunkenness, vagrancy and prostitution. In the 1870s, fears about the formation of a permanent underclass of paupers and criminals had turned the Victorian era “cult of true womanhood” on its head: the “fallen woman” was seen as the creator of an idle and vicious generation that drained the nation’s resources and threatened its stability.

Modeled after juvenile reformatories, the House of Refuge for Women was the first women’s institution to incorporate cottage units in a remote rural setting. It was designed to foster the fallen woman’s rehabilitation by promoting the “idea of family life” and each cottage contained its own kitchen, dining room and a sitting room, where the family (i.e. female prisoners) assembled in the evening for diversion. In these idealized domestic settings, “wayward women” received training in sewing, cooking, serving and other domestic arts. From the beginning, the fostering of appropriate gender roles was a central component.

Once again, PPMP reached out to the Columbia County community for information and perspectives. And once again, the effort was richly rewarded. County residents provided access to two complete case files from the House of Refuge for Women. These rare folders, tied up with pink ribbons, contain the institution’s educational, social, and medical records on residents. Stories based on the contents of these files and published on PPMP’S website provide a window into the culture of women’s reformatories and the experiences of women incarcerated in Columbia County in the 1890s.

Tracy Huling is the founder and Director of the Prison Public Memory Project. Website: prisonpublicmemory.org E-mail: