COPAKE—The Copake Grange hosted an event to unveil a newly-placed marker designating its place on the National Registry of Historic Places May 4.

Persistent rain stopped completely at 10:45 a.m. as more than 60 community members, Grange board members and visiting dignitaries gathered in front of the Copake Grange #935 Hall, 628 Empire Road, for an 11 a.m. ceremony to dedicate the marker, awarded by the William G. Pomeroy Foundation. The Grange Hall was built 1902-03.

The day’s honoree was 99-year-old Copake resident Bernice Bussett, who was awarded a gold Grange pin, along with a certificate and flowers for her long service to and membership in the Copake Grange. 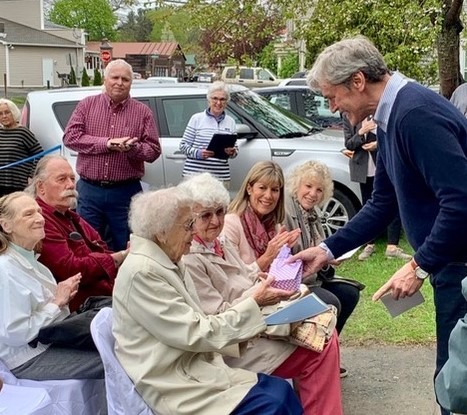 According to an introduction of Ms. Bussett, written by Copake Grange Historian Howard Blue, “Bea” Bristol Bussett has been a member of the Copake Grange for 55 years. The daughter of Albert Bristol and Gladys Van Hoeser, she was born in January 1920, 18 years after the Copake Grange was founded. She grew up in the house on Main Street next to where the Bank of Greene County currently stands.

For the most part Ms. Bussett remembers attending a string of dinners, film showings and other entertainment at the Grange as she was growing up.

After the Pearl Harbor bombing and U.S. entry into World War II in 1941, Ms. Bussett was among the many who received training at the Grange to take turns staffing an aircraft spotting tower built near the site of the present-day Town Hall. The training taught residents to recognize the sounds and silhouettes of various aircraft. Others who received the training included Urbain Nadeau, Remo Gabaccia, Ms. Bussett’s sister, Barbara Gobillot, Howard and Blanche McGee and Dorothy Silvernail Hughes.

Grange membership has increased from 5 in 2017 to more than 75 today, and its resurgence as a community center has become a part of Copake’s revitalization effort. 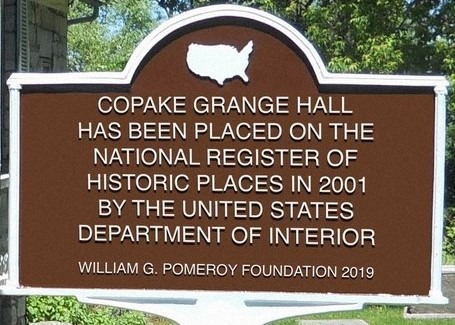