Justin Elliott took his place on the board for the first time, replacing Maria McLaughlin. The other six Board members remain the same. The board voted to continue Carrie Otty as president and Willette Jones as vice-president for the school year. The other four members are Sage Carter, Linda Hopkins, Chuck Parmentier, and Lucy Segar.

The Board also designated the following committees:

An audience member, who said he graduated from Hudson High School in 1976 and that his grandfather helped build MCS in the 1930s, called the athletic facilities on the MCS grounds “something that the community could beautify and be part of.”

MCS was built as the High School, and its grounds served both high school sports and community recreation. Polk’s 1951 Hudson City Directory, in its “Recreation” section, described the high school and athletic field, completed in 1937, as “a complete ‘civic center’… that cities… might be proud of—including a baseball diamond, football and soccer field, a quarter-mile running track, five tennis courts, ample playgrounds for smaller children, park areas with drives, walks, etc.”

The high school moved to its present building in 1972, and the MCS building filled with younger grades. Since fall 2018, it has housed pre-kindergarten through 5th grade. But tennis courts and the varsity baseball field still stand on MCS grounds and the baseball field is getting upgrades right now. Football and soccer lingered on MCS grounds until 2017, and the earlier football scoreboard still stands above the old field.

The community still uses the facilities. Early the mornings of July 5 and 6, two people were playing tennis, and someone was running the track. The HCSD has invited the community to use the new track on the current High School grounds, but the old track is more convenient to reach from some parts of Hudson. (Both locations have views of the Catskills.)

Even though his class attended Hudson High School in its present location, the speaker at the July 2 meeting remembers the MCS grounds as “the nicest part of Hudson. It’s where we all got together Friday night. There were marching bands. The spot is priceless. There’s nothing like it,” he said. “The community really loves the spot. You have something special on your hands.” 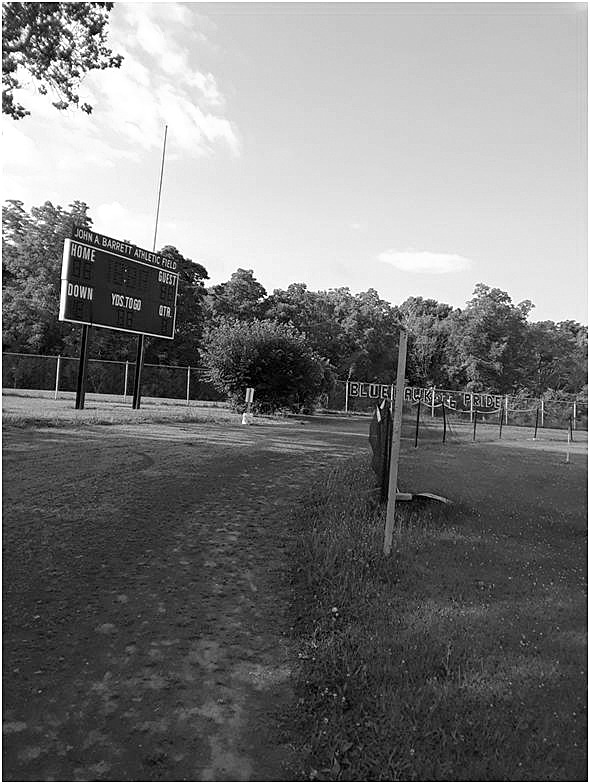 The cinder track and mechanical scoreboard, above, at the Hudson City School District’s Montgomery C. Smith Elementary School are no longer used by school district teams but a Hudson graduate recently praised the athletic fields, telling the board, “The spot is priceless.” Photo by Jeanette Wolfberg

He lamented the current condition of the tennis courts and the track. But at the current high school, he added, “you have only buildings and a rubber track.”

He also questioned whether the current work on the MCS baseball field had ever been voted on. The administration answered that since the capital project had done so much for football and track, it was time to do something for baseball.

• The Board welcomed new faculty members Abigail Weiman (second grade) and Megan Adrian (third grade). Ms. Weiman, who graduated from Hudson High School, said, “I’m very excited to be back and looking forward to beginning my journey.” Ms. Adrian, from Greene County, indicated she was eager to bring her ideas “across the river”

• Assistant Superintendent of School Improvement April Prestipino announced that Camp Invention takes place the week of July 8 on the grounds of MCS. This year it has 75 students, going into first through sixth grades. This is an expansion from last year, when it had about 45 students who were entering third through fifth grades. Of the 75 students: 64 are HCSD students–29 are girls and 46 are boys. Eleven are “rising” first graders, 13 are rising second graders, 10 rising third graders, 20 rising fourth graders, 15 rising fifth graders, and 6 rising sixth graders.

The next meeting of the HCSD Board of Education will take place Tuesday, July 16, at 6:30 p.m., at the Junior High School.