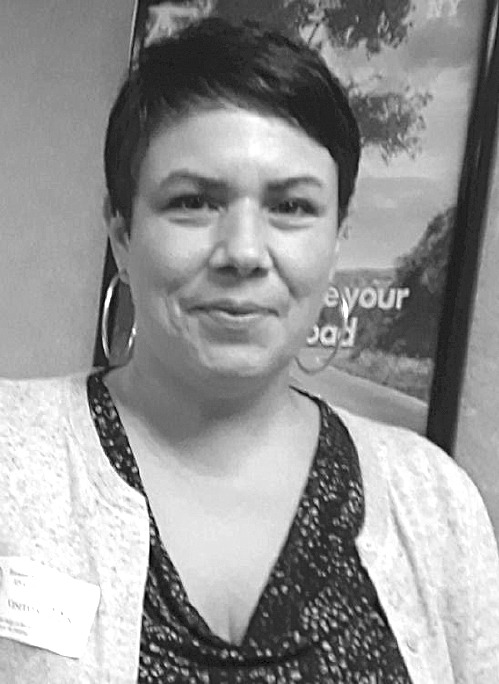 Andrea Chrisjohn is the new program director/case manager for ReEntry Columbia, which helps people who have been in prison or jail readjust to liberty and lead productive lives. Photo by Jeanette Wolfberg

Andrea Chrisjohn, a graduate of Columbia Greene Community College, has joined ReEntry Columbia as its new program director/case manager. She replaces Carolyn Polikarpus, who retired after six years. Ms. Chrisjohn majored in Criminal Justice at Columbia-Greene and received a BA in organizational leadership and communication from Marist College, she said at the meeting. She has a paralegal certificate and court advocacy experience.

In 2010, she started a non-profit ReEntry organization in Poughkeepsie, but two years later she had a car accident after which her organization could not continue. She has also been involved with People, Inc. She said she is three-eighths Iroquois.

Ms. Polikarpus issued a statement recounting the history of ReEntry Columbia—which she co-founded with Lynn Rothenberg in 2013—and thanked supporters. “I am deeply grateful to everyone in this room and all those who are not here today who have supported us, advocated for us, redirected us when it was needed, and worked together with us for the benefit of the people we all serve,” she said. “Columbia County has shown there’s lots of heart and wisdom here.”

Several meeting participants suggested that certain classes and workshops for jail inmates decrease the chance of recidivism after release. Among these classes are art, indicated artist Melissa Sarris. “I have met many formerly incarcerated people who are now musicians, artists, business owners,” she reported. One inmate told her that inmates felt respected by the art teachers.

Ms. Sarris said the art classes “make a safer environment in the jail.” And some arts and crafts involve skills that can be used in jobs.

Currently Ms. Sarris comes to county jail sporadically to teach one-day classes. But for a few years, she was teaching an aspect of art there once a week for stretches of several weeks at a time. And “prisoners have asked for our art program back.” She urged more funding so she could establish a regular art program at the jail.

As the county jail, which holds adults, waits for an art program, the Hudson Correctional Facility, which holds 16 and 17 year-olds, “is going to get two art programs,” said Anne Marsolais, regional coordinator of volunteer services for the state Department of Corrections and Community Supervision. The inmates are young, “they’re eager, they’re hungry for experiences, and they need distractions,” she said. The facility has only about 30 inmates, three of whom are female, and the small size is an opportunity for teachers to give more attention to each “student,” she added.

As for other classes and workshops at Columbia County Jail, Laurie Scott, executive director of ReEntry Columbia, reported that a group of 15 men completed OSHA training in June and are looking for post-jail employment.

• Ms. Scott reported that some inmates who had dealt drugs but not used drugs themselves requested their own classes and training for overcoming their “addiction to the criminal life style”

• Vince Doto, Columbia County director of probation, spoke about a pre-trial release program. “Some courts send people to us. Then we make assessments, decide which services to suggest, and send a report back to the court. There are more services than any time I can remember. Some courts take advantage of it, some don’t. If you know someone, send them our way”

• Russ Immarigeon, president of the Columbia County Magistrates Association and currently a judge in Hillsdale, recommended that local courts get involved with re-entry and do so “earlier in the process”

• Gary Flaherty, Executive Director of the County Veterans Services Agency, told him, “We are blessed in Columbia County to have such an outstanding group of justices.”

The next ReEntry Columbia Task Force meeting will take place Wednesday, September 25, at noon at 325 Columbia Street in Hudson.