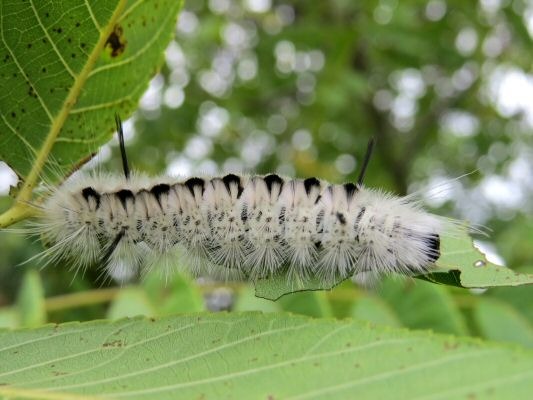 ANCRAMDALE—Think crawling bottlebrush, only an inch or two long, and you’ll have some idea of what a white hickory tussock moth caterpillar (Lophocampa caryae) looks like.

Fuzzy white spiky hairs and a black stripe along their backs give them sort of a punk rocker look.

Though some describe them as cute and cuddly, experts advise not to touch them.

This caterpillar’s claim to fame is that its bristle-like hairs have microscopic barbs that can cause a mild to severe allergic skin reaction.

Severity of the itchy rash depends on the sensitivity of the person on the receiving end of the poison.

White hickory tussock moth caterpillars, a/k/a, white woolly bears, are here in Columbia County, but not because they are part of the onslaught of invaders. No, they are native to eastern North America, ranging from Nova Scotia to the North Carolina mountains.

Donna Peterson, master gardener volunteer coordinator for Cornell Cooperative Extension of Columbia and Greene Counties, told The Columbia Paper this week, she has seen them for all of the 25 years she has lived here.

The size of the hickory moth caterpillar population is “cyclical,” she said, adding, “every other year the production is larger. This is one of those years.”

The larvae eat hickory leaves and nuts, but will settle for oak or maple, “whatever is around,” she said. “They don’t do much damage,” she added.

According to a Maine Forest Service document on the subject (www.maine.gov/dacf/mfs/forest_health/documents/hickory_tussock.pdf), these caterpillars “feed on a wide array of hardwood trees. In Maine they have a particular fondness for birch, quaking aspen, basswood and black locust. The caterpillars may strip the occasional tree but in general do little harm to the forest. They “feed gregariously when they are young and then wander–A Lot–as they get larger and are frequently encountered on the ground, undergrowth and even climbing up siding.”

These “native insects and are found every year, usually in small numbers. Occasionally the numbers will increase to where they are noticed by the general public,” the publication said.

Should you encounter one of these white-haired caterpillars, it would be best to use a piece of paper or paper towel for protection when picking them up, said Ms. Peterson.

According to an email response to caterpillar questions from the New York State Department of Conservation, this native caterpillar “belongs to the family of moths that include tussock moths, owlet moths and tiger moths.

“They typically come out as caterpillars in the summer instead of spring and they are highly mobile when they mature as caterpillars. Their long hairs can cause severe allergic responses in people who are sensitive to the insect, so it’s best to avoid them. It does not have any adverse effect on pets,” the DEC said.

“The caterpillar is not invasive so there is no immediate threat to the environment,” but “the DEC continues to track the insect.”

An October 2015 article, Good Housekeeping magazine (www.goodhousekeeping.com/health/a34879/dangerous-caterpillar/) quotes a doctor whose young son had touched one of the caterpillars, as saying “the rashes are only temporary and can be treated at home with lotion and ice.”