NOT EVERYTHING CAN BE SAVED. As Town Historians, we hear that a lot. There never seems to be enough money to prevent local history from disappearing.

But it’s important to save things. What gets lost gets forgotten. A good example is the McKinstry burial plot on upper Hunt Road in North Hillsdale. Its beautifully carved headstones, many dating to the late 1700s, have lain mostly undisturbed for over two centuries. They lie flat, probably laid down years ago by a kind farmer to protect them from harvesting equipment. Over the decades they were covered over with earth and brambles. In 1998 Becky Dean of Hillsdale, a college student, found the small burial ground and spent a summer excavating the stones, recording inscriptions, and researching McKinstry history. Then she went back to college, moved away, and the headstones vanished again.

Why should we care about this particular burial plot? First, for its historical significance: John and Jane Dickey McKinstry arrived in America from Northern Ireland in 1740 and put down stakes in Hillsdale in 1772, just six years after the burning of Nobletown by Van Rensselaer-backed British troops. The land between the Massachusetts border and the Hudson River had long been in dispute between the New York and Bay colonies–a dispute that wasn’t resolved until after the Revolutionary War. Concerned about its sparsely settled western border, Massachusetts encouraged “military families” to settle the region. 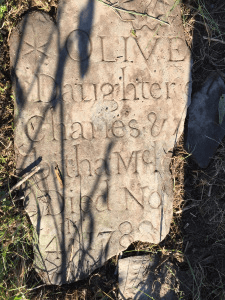 The McKinstrys were nothing if not a military family. Both John Sr. and his son John Dickie had served in the French & Indian War, and of the five McKinstry children–Thomas, John Dickie, Sarah, Charles and David–all four brothers served in the Albany County Militia, 9th Regiment during the Revolution. John Dickie was at Bunker Hill and participated in “all the principal northern battles.” When captured by pro-British Indians at The Battle of The Cedars in Canada, bound to a stake and facing immolation, McKinstry remembered that the hostile Indian chief, Brandt, was a Free Mason. John gave the Masonic distress signal, which the chief recognized at once, and was immediately released. The two old combatants, who became friends, relished retelling the story in their later years.

An attempt to document Hillsdale’s cemeteries “rediscovered” the McKinstry plot in 2016, giving us another reason to care: the glimpse it provides of women’s lives in the late 18th century. It’s possible to piece together a picture of McKinstry men from public records, but we know almost nothing about McKinstry women, except for what can be read on their headstones:

In Memory of Mr(s). Tabitha w(ife)

32nd year of her Age

Major Charles McKinstry married Tabitha Patterson in 1774. She bore eight children and died giving birth to the ninth. The average 18th century white woman could expect to become pregnant between five and ten times, and to give birth to between five and seven live children. One in four children died before the age of ten.

Tabitha left five children under age 13. There was only one thing for a widower with five children to do: marry again. Charles did, in 1790, to Nancy Norton of Farmington CT:

Nancy died delivering her fifth child, who also died. Charles was a widower again at 43, with nine children. But Nancy’s headstone reveals something else: a major when Tabitha died, Charles was now a colonel. Local records list him as Hillsdale Town Supervisor, and the owner of tavern at “the foot of the Cakeout Hills” where “all the prominent public business of the town, civil and military, was done.” His public life had not been limited by personal sorrow.

Charles married a third time, to Bernice Egliston of Great Barrington. A stepmother to nine children, she bore two more, one of whom died at 11 months. Bernice died in 1845 and is buried in Great Barrington. Charles died, a general, in 1818.

Domestic sorrow is not to be found in a town’s records. Tabitha and Nancy’s headstones are all that remain to document their lives, but that does not make them any less worthy of remembering.

Sadly, the delicately carved headstones are once again disappearing to age, weather and neglect. What place should they hold in our lives today? With what degree of tenderness should we gather up and preserve their dust?