COPAKE—Malfunctioning mechanics and nature’s force played roles in creating a few unforeseen expenses brought before the Town Board at its November 14 meeting.

In most instances, the board agreed to pony up the needed funds, but one expense—related to the impending changing of the guard in town government—sparked discord and was rejected by a majority of board members.

Town Supervisor Jeff Nayer started with some good news: the town will save money under two shared service agreements. Copake will only have to pick up one-third of the $700 cost of a new computer for Assessor Lynn Hotaling by sharing the expense with Ghent and Stuyvesant, the two other towns she serves.

Under a shared-service agreement with the towns of Canaan, Hillsdale and the Village of Philmont for the services of Code Enforcement Officer (CEO) Lee Heim, Copake will save $1,176 in 2020 and its monthly contribution to the total CEO expense will be reduced by $30. The saving is due to the purchase of a new hybrid gas/electric vehicle through a NYSERDA Clean Energy Communities Grant for $35,000. Mr. Heim will use this new vehicle, with its increased fuel efficiency, in his duties for the municipalities. Canaan, which is the lead agency for the CEO-shared-agreement, received the grant and will purchase the vehicle.

On the not-so-good news side, Supervisor Nayer said that despite all his and Rus Davis’ best efforts to straighten out the time on each of the four faces of the Copake Memorial Clock, two of them are still out of whack. One of the two non-working clock faces is consistently off by 15 minutes and the other steadily loses time.

The 75-year-old clock in the heart of the Copake hamlet, is a tribute to all who served in wartime. Back in 2011, a committee of devoted citizens successfully raised $42,000 to give the clock a complete restoration of its clock-works and chime unit, rebuild the body and pedestal and revitalize the stained glass to its original appearance and beauty in time for its big re-dedication that year.

Mr. Nayer said it will cost an estimated $4,400 to replace all four clock movements (even though only two are not working right) and upgrade the lights to LEDs. He said if it turns out the controller is bad, that will be an additional $1,000. He asked the board’s authorization to get the clock repaired.

“The clock is Copake,” said Councilman Stosh Gansowski, adding repair of the clock is “a no-brainer” as far as he is concerned. All board members agreed.

The next broken machine the board heard about was the generator that powers the Copake Park Building when the power goes off. The park building is an emergency shelter.

The propane-fired generator was originally given to the town by the Copake Fire Department. The cost to replace it is about $5,000, but Mr. Nayer is hoping that the circuit board can be rebuilt for about $800. If not, the town will seek grants to replace the generator through the county.

In another matter, a natural mishap befell the town-owned Roeliff Jansen Historical Society Museum at 8 Miles Road in Copake Falls in mid-October, when the wind blew a tree down on its roof.

The primary damage was to the chimney, which was knocked down. The building’s gas line was “kinked” and needed replacement and the tree poked a hole in the roof. Mr. Nayer said the town has a $1,000 deductible on its coverage and its insurance company has issued a $13,414 check for the repairs, but the issue is getting a mason, carpenter and roofer to do the work. “We inspected and sealed the building,” said the supervisor, adding “it could have been worse.”

A little later in the meeting Councilwoman Jeanne Mettler brought up the matter of getting a new municipal bookkeeper trained to handle those duties as of January 1 when a new supervisor takes over. She asked that the board allot $1,500 to pay for the training, which she hoped could be done by current Town Bookkeeper Terry Traver, who will leave at the end of the year and move to Tennessee.

Supervisor Nayer did not run for a third four-year term this November. Councilwomen Mettler, a Democrat, and Kelly Miller-Simmons, a Republican, ran for the post, but the outcome has still not been decided more than two weeks after the election and is too close to call.

Supervisor Nayer immediately became enraged at Ms. Mettler’s proposal. He said back in August that he had asked both women to come up with someone they would appoint as bookkeeper, if elected, and that person could then spend some time with the town’s current bookkeeper to learn the job.

“This is the supervisor’s appointment,” he said, noting that now is the worst possible time to train someone. He said Mrs. Traver is traveling back and forth between Columbia County and her new home and when she is in the office she is trying to keep up with routine tasks like payroll and bill-paying in addition to all that the year-end and closing of the books entails.

Ms. Mettler said that having Mrs. Traver train a new bookkeeper will make for a smooth transition and benefit the town as a whole no matter who the new supervisor is.

She made a motion that the board earmark $1,500 for a new bookkeeper’s training whenever it is convenient for Mrs. Traver.

Councilman Richard Wolf agreed with Ms. Mettler saying, “The town is in a bind, we need to get someone trained now.”

Ms. Mettler said since the bookkeeper is someone the supervisor has to work closely with, she did not think it was fair to impose her selection on Ms. Miller-Simmons or visa versa so that the same person could be trained back in August.

Ms. Miller-Simmons said she did not have anyone in mind to appoint as bookkeeper back in August and that she had left it open to someone Ms. Mettler might suggest.

Later, Ms. Miller-Simmons said as time grew short she prepared for the possibility of taking over as supervisor by both finding a municipal bookkeeper to work with and by spending time in her role as deputy supervisor with Mrs. Traver to learn what she does. “I wanted to make sure I knew what I was getting into,” said Ms. Miller-Simmons.

Mr. Nayer said it did not matter if the board agreed to allot the money for training or not, the bookkeeper is his appointment and he would not allow or authorize the appointment of someone now to train with his bookkeeper. 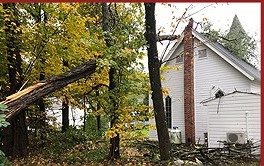 Pictured is the aftermath of a rainy and windy October 16, when the roof of the RJHS Museum was hit by a falling tree. Photo from the Roe Jan Historical Society website