NEW LEBANON–When school district Superintendent Leslie Whitcomb retires at the end of September, she’ll have more time for reading, for those quilting projects and for indulging in fond memories of her nearly 13 years with the district, six as superintendent. Andrew Kourt, current principal of the Walter B. Howard Elementary School, becomes superintendent October 1.

“It’s a wonderful district, Ms. Whitcomb says. “Parents, teachers–everyone at both our junior/senior high school and our elementary school–is highly collaborative, and they’ve made New Lebanon a great place to have your kids get an education. Our schools are happy buildings.” 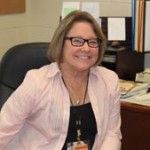 The New Lebanon Central School District (NLCSD) serves 450 students grades K through 12, and it boasts an enviable record. “Our students have access to 50 college credits, and 83 percent of our seniors graduate with at least some of these credits. That’s unusual for such a small district,” Ms. Whitcomb says, adding that the teachers who offer college courses are certified as adjunct college professors.

Over 90% of NLCSD students graduate, reading and math proficiency scores are higher than the state average and the student/teacher ratio is lower.

In addition, Ms Whitcomb says the district’s music program is especially unusual in that it begins early, in the fourth grade, and all students participate. “It’s a very important part of the school day–we have a senior choir, an elementary school chorus, band–something for everyone, and everyone takes part.”

The district had little in the way of sports facilities until it decided to merge its athletic program with that of the Berlin school district in neighboring Rensselaer County. Now New Lebanon students can participate in soccer, swimming, volleyball and track, and Ms. Whitcomb adds that Berlin will complete a brand new track this spring.

The district’s small size affects the level at which it is funded and the programs it can offer. Several years ago there was talk that the New Lebanon district might consider merging with a relatively larger district like Chatham. But no substantial discussions ever took place, Ms. Whitcomb says, who believes that such a merger would have raised taxes without conferring significant benefits.

“We can’t sustain our program on this budget,” she says. We’ve got to meet state requirements, maintain the quality of facilities and programs, pay teachers and staff.” Ms. Whitcomb says that in actual dollar terms, local property tax and state funding levels have been in decline for years.”

The district currently expects to have a balance of over $252,000 at the end of the current school year, and some of that will likely to be applied to offset a gap in the proposed 2020-’21 budget. But it won’t be enough because of the state “cap” on tax levy increases.

Property tax revenues provide about 60% percent of a public school district’s funding in this state. The other main source of financial support for school districts comes from annual state funding, most of it for what’s called Foundation Aid. Although funding levels in dollars shift from year-to-year, percentages of the total paid by local, state and federal governments remain fairly constant.

Funding through Foundation Aid has been increased but Governor Cuomo eliminated several other state payment categories. These include BOCES, instructional materials, transportation, and aid to offset excess costs. The net result for the school district is that $353,376 actually has been taken away for next year, leaving an overall increase of only $4,145.

“These categories had generated significant income for the district yearly, and now that income is gone,” Ms. Whitcomb says. “As a district, we make long-term plans based on our expectation of receiving that expense-based aid. There’s just no way now to anticipate, to budget rationally.”

Ms. Whitcomb says that 45% of the district’s residents are at or below the poverty level–up from 15% in the nearly 13 years since she’s been with the district. She points out that there are no longer enough jobs in New Lebanon to support families properly. And this, she adds, shows up with more kids with noticeable social and emotional needs.

Budget stress or not, the NLCSD will hold a luncheon for area seniors prior to its spring concert in May. “We’re always trying to improve,” Ms. Whitcomb says, “trying to determine where our efforts are most required, always taking the needs and desires of our New Lebanon community into account.”