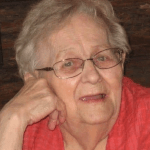 She was born May 3, 1929 in Hudson to Maude Mugford and Byron Phillips.

She had a mind of her own right from the start and spoke often of how much trouble she was to her “poor mother.”

She was blessed with three siblings: Margaret who tried to rule the roost; Nancy who was perfect unless you stole her homework or laid out her clothes for the day and, when she was 8, her little brother, Barry who she spoiled until his lovely wife, Cilene took him off to Australia.

She suffered the loss of her father at age 10 and missed him and his brilliant mind her whole life.

She was a girl who loved books, learning, music, people, family, God and laughter.

She loved being on the creek and hanging out with her sisters and friends.

She knew what she wanted most was to be a wife and mother but, even as a child, she was called to selling.

At 6 she sold seeds or garden vegetables up and down the street to make money. She sold her way through school and, during World War II she sold what she could to buy tobacco and roll cigarettes to send to soldiers abroad.

She graduated from Kinderhook School at the tender age of 16 and went to work for the state—not selling anything—it was a job she hated.

In 1948 she married Henry Knitt Schools and they started a family. Timmy, Bevy, Carl and Jon filled her days with cooking and sewing, homework help and selling World Book Encyclopedia so she could get a free set for the kids.

She and Henry shared their passion for learning with the kids and exposed them to hard work, life lessons, a strong faith and lots of fun.

Their extended family of aunts, uncles and cousins made for many holiday gatherings, wonderful camping trips and enough love to last forever.

Mrs. Schools was baptized in the Hudson Methodist Church and went on to play the piano and organ at Stuyvesant Falls Dutch Reformed Church where she was also a very active member holding many roles of leadership.

She would only work when her kids were in school so she was a waitress for many years at Kozel’s Restaurant where she formed lifelong friendships with the family.

She believed in hard work and did what she had to. She sewed, took in laundry, served the community and helped anyone who needed it.

She made food for Election Day, coached Little League, rang bells for the Salvation Army and bought a “Hot Dog Bus” which she loved.

The house bustled with activity, school projects, piano music and was open to anyone who needed a shoulder to lean on or wanted to chat over a coke.

As they aged, she took care of her grandmother and mother and Hank’s parents as well. She believed there was no more important way to spend her time or better example to set for her children.

In 1968 the journey of being a grandmother began and she, along with Henry, welcomed each grandchild with open arms cherishing them for who they were. They appreciated each ones’ talents and skills, interests and later, careers. They went to recitals and ball games, graduations and weddings. Their grandchildren celebrated life with them and sat at their bedsides when they passed, “Poppy” in 1999 and “Gramma Frannie” July 22.

As the kids grew and flew the nest she went into real estate, first with Irving Price in Hudson and then opening Old Ghent Realty in The Bartlett House in Ghent.

She loved real estate and became a preeminent leader in the field. As her business prowess grew, and her reputation with it, family, her coworkers and her trusted and treasured secretary, all helped move the business to become a highly respected force in Columbia and surrounding counties.

She took great pride in selling houses in her home county. She also treasured the people she met along the way and the friends who continued to be a part of her life in her retirement, celebrating birthdays with her and sitting on the porch to reminisce and visit.

Old Ghent Realty is carried on by family: son and broker, Timothy; son, Carl, a licensed realtor; her daughter-in-law, Pamela Herzing, a broker, has been with Old Ghent since the early years. Her daughter-in-law, Cynthia Elliott recently joined the team with her license, and granddaughter, Sam, lends her creative talent to all advertising and publications. Her business model, “Strive for Excellence in the Real Estate Community” lives on through them.

She died peacefully surrounded by loved ones who each got to whisper their devotion and love in her ear.

Mrs. Schools spent her life helping others behind the scenes individually and publicly raising money for the organizations she believed benefited her community.

Donations in her memory may be made to Art Omi in Ghent, Columbia Memorial Hospital or St. John’s Reformed Church Food Pantry or Deacon’s Fund in Red Hook or to a charity of one’s choice. “She will be missed but our memories of her will bring more laughter than tears. Her wise teachings will be carried down for generations.

“Thank you, Frances, for all you gave to others. Thank you from all of us.” Arrangements are with the Raymond E. Bond Funeral Home, 1015 Kinderhook Street (Route 9), Valatie. To send condolences visit raymondbondfh.com. 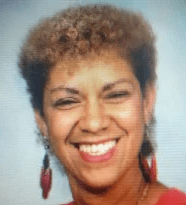 Born in Humacao, Puerto Rico, January 16, 1946, she was the daughter of the late Gregorio and Maria Lo’pez.

She was a CNA at Pine Haven Nursing Home in Philmont. She was a faithful and devoted communicant of the Seventh Day Adventist in Kinderhook.

Calling hours will be held Friday, July 31, 2020 from 9 to 11 a.m. at the Sacco Funeral Home, 700 Town Hall Drive, Greenport. Funeral Services will follow at 11 a.m. at the funeral home with Pastor Tony Mazzella officiating. Burial will follow in Mt. Pleasant Reformed Church Cemetery in Greenport. 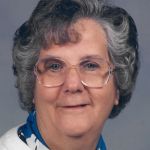 VALATIE—Thelma May Sokol, 93, of Valatie died Monday, July 20, 2020 at The Grand at Barnwell health facilities.

Born February 27, 1927 in Sharon, CT, she was the daughter of the late Freda (Bilyou) and William Haver and the wife of the late Stephen Sokol.

Before her retirement, she had multiple occupations at once including at the Hudson River Psychiatric Center for 28 years, the Soda Fountain, Lucky and Platt Department Store, and the Big Ben Department Stores housewares department, all in Poughkeepsie.

She was a member of the Valatie Fire Department Ladies Auxiliary. She enjoyed traveling on bus trips to various places in the northeast. Her sense of humor and wit was her grandchildren’s favorite.

A graveside service will be conducted Wednesday, July 29 at 2 p.m. in the Kinderhook Cemetery. 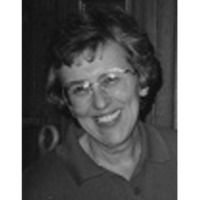 She grew up in Hollowville and graduated from Ockawamick Central School, Philmont in 1958. She also attended Mohawk Valley Community College.

She was born June 30, 1940 to the late Alex and Gertrude Rosenfeldt of Columbia County, but resided in Fort Worth, Texas for most of her life.

In 1975 she and her husband, Ken, started Canard Air Conditioning in Benbrook, Texas. Mrs. Canard was a devoted member of Olive Place Baptist Church and a wonderful lady who touched many people in her lifetime.

She was predeceased by her husband, Kenneth Canard, and by her parents.

Survivors include: her brother, Robert Rosenfeldt; sister-in-law, Doris Harrington; son, Joe Canard; several grandchildren and great-grandchildren. Her niece, Becky Patterson was an especially devoted family member who spoke daily to her. Many of her friends from Columbia County still kept in touch with her after more than 60 years since their graduation. She will be deeply missed.

Arrangements are with the Winscott Road Funeral Home, Benbrook, Texas.