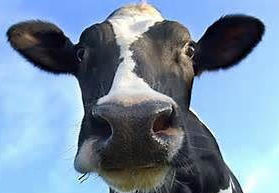 WHEN SCHOOL ENDED for the summer in 1959 we all rejoiced to be “free” for a couple of months. It depended on what you considered free, free of school, but certainly not free of chores. A family farm requires all capable family members to pitch in. I spent much of my summers at my grandparents’ (Gram and Gramp Wambach) dairy farm, helping them while they kept an eye on me. The black and white Holstein calves they raised over the winter were turned out into the small field by the barn, the “calf lot,” to get a taste of their first green grass.

We had checked the fence because those heifer (female) calves’ first instinct was to go exploring. They learned to respect a fence before returning to the open end of the barn. We could see them from the house or the barns so knew they were okay. This went well until they had eaten down most of the grass and were growing up along with their ever increasing appetites.

Gramp and I would take a truck and scythe out to a spot where there was a good supply of grass and get more food to keep them happy. He would take a whetstone and sharpen the scythe blade (think of what the Grim Reaper carries) then start rhythmically swinging the scythe through the grass to cut it. He was really good at this, gained from 50 years of practice. I loaded the grass on the truck with a hay fork, and we took it back to the hungry young bovines mooing in anticipation.

As I got older Gramp began to teach me how to do it. The scythe is a wickedly sharp tool and needs to be handled carefully. The first lesson was never ever leave it lying on the ground. I remember him putting it down and then stepping on the curve of the handle which flips the blade up toward you. To emphasize this he told me the story of a scythe flipping up and gutting a horse that accidentally stepped on it. I was too stunned to comment and never forgot this lesson.

I must have made him cringe as I first dulled the blade with the whetstone then learned the technique. I cut a few fingers too. Nothing too serious but it hurt. I left some jagged cuts of grass and finally got the required load on the truck. That is hard work on a hot day.

One day I promised to get the fresh grass for my grandfather, who wasn’t feeling well. Typical kid that I was I goofed around and didn’t get it done before a thunder shower came along. I knew I had to do it so I went out in the rain, thunder and lightning and got the load back to the barn. Boy did I get a talking to. There I was out working with that wet metal blade with lightning all around. I guess I was spared for my good intentions and youthful stupidity. At least I kept my word, which was important. The heifers were grateful.

In August the grass was getting brown and scarce while the field corn was getting tall. We had to cut paths for the tractor and corn chopper to drive through so we switched to corn stalks for the stock. Then we took the truck and corn knives to the field. The corn knife has a wooden handle about a foot and a half long with a perpendicular straight blade at the end. You held the stalk with your left hand and quickly drew the knife through the bottom of the stalk with your right hand. The stalks were juicy and I was allergic to it. Each day I got red welts on my arms. No one paid attention to minor inconveniences like this or a few cuts. It was easier if someone backed the truck up as you cleared an area so I taught my grandmother to drive. I thought it was odd that no one had done this before. She enjoyed getting out of the house and was quite proud of herself.

The heifers went crazy when we threw the corn in to them and they ate it up like candy.

Farming is not for wimps. We worked hard on our vacations, and I often wonder how our current computer/technology bound youth would fare with this type of summer “vacation.”