(This article is reprinted with permission from the July 2020 edition of Copake Connection, the town of Copake newsletter.)

LIKE YOU, I’M SURE, I try to stay on the right side of the law. Except for a few parking tickets and a speeding ticket for going 31 mph in South Egremont, MA, I have a pretty clean record. So it was with some consternation that I recently realized that between mid-February and the end of May, I (and probably you too) had been committing a legal offense.

What offense? We had been violating a provision of a January, 1845 New York State Penal Law 240.35 (4), which made it a criminal violation for groups of individuals to wear masks in public. Violators—you and I—could have faced a 15-day jail sentence!

The law was largely a reaction to an incident that took place in Copake on December 11, 1844 at Sweet’s Tavern, known later as Holsapple’s Inn & JJ’s Pizza; it’s now the site of the Clocktower Pub.

For decades before law 240.35 came into existence, many Hudson Valley’s farmers had been tenant farmers beholden to the valley’s wealthy patroons, who had a monopoly over land ownership in the valley. Farmers had to pay rent in the form of livestock or crops in amounts unilaterally decided by the Livingston family and other patroons. In drought years sometimes those rents exceeded the farmers’ ability to pay. That’s why in 1844, a number of them, fed up with their semi-feudal servitude, went on rent strike.

The Sweet’s Tavern incident occurred after two Roe Jan area farmers joined the strike and the powerful Livingstons complained to Columbia County Sheriff Henry Miller. The county’s legal authorities drew up papers authorizing Miller to seize and auction off the striking farmers’ livestock and crops, and Sheriff Miller set out with the papers on the morning of December 11, intent on doing his duty.

Anticipating this, Smith Boughton, a physician and strike leader, traveled to Copake using the alias of “Chief Big Thunder” to intercede. Gradually a huge crowd of supporters gathered. To protect themselves from arrest, Boughton and many others calling themselves the “Calico Indians,” wore the masks and the bizarre costumes shown in the photo. At Sweet’s Tavern, Boughton seized the legal papers Miller was carrying and threw them into a fire in front of the tavern. 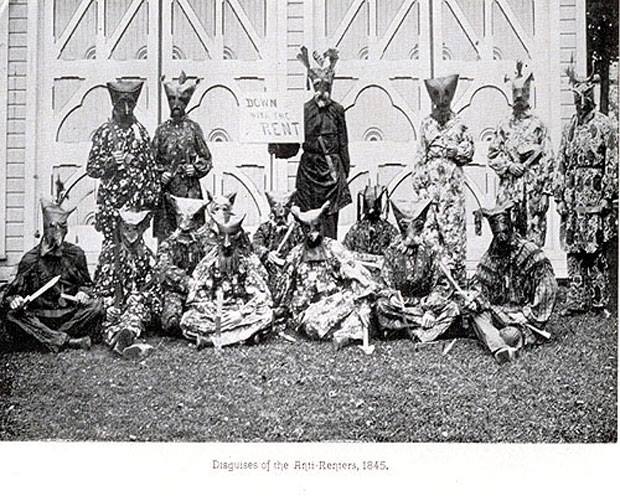 Anti-rent farmers wore their “Calico Indians” disguises in a photo that says the year 1845. In 1844 a rent protest by farmers led by a man calling himself “Chief Big Thunder” at Sweets Tavern in Copake led to a confrontation with the Columbia Country sheriff and the subsequent adoption of a state ordinance outlawing the wearing of masks. Photo contributed

Despite their defensive measures, a week after the Sweet’s Tavern incident, Boughton and several others were arrested and taken to Hudson where they were tried and convicted for their treatment of Sheriff Miller. Boughton was sentenced to life imprisonment and a few months later, disturbed by unrest and doing the bidding of the patroons, the New York State legislature passed the anti-mask law.

In recent years, New York City police used the same law to break up the Occupy Wall Street protests of 2011, though the charges were later dismissed. Flash forward to 2020 and suddenly the current state attorney general, Letitia James, was alerted to the existence of the anti-mask ordinance. In mid-May, she contacted Governor Andrew Cuomo and the legislative leadership and urged that the anti-mask law be suspended or repealed. Her advice was quickly followed. Governor Cuomo signed the repeal of the mask law on June 13, 2020.

And so it is that those who believe in science and who realize the issue is a matter of public health not of politics can wear masks free of fear of arrest, at least in this state.