EAST TAGHKANIC—Mildred Jean Keyser, 84, of East Taghkanic passed away at home Saturday, August 15, 2020. Born May 20, 1936 in Fort William, Ontario, she was the daughter of Hugh and Mildred (Upper) Gallinger.

She was a meticulous homemaker and fabulous cook. She took great pride in keeping a spotless, pristine residence. Her community involvement included being a Cub Scout leader, a “Pink Lady” at Columbia Memorial Hospital, a member of the Junior Service League, Claverack Senior Citizens, and Sunday school teacher at the Reformed Dutch Church of Claverack. She was very proud to be an honorary citizen of Lost Boys Reservation.

Funeral services will be held Tuesday, August 18 at noon from the Bates & Anderson Redmond & Keeler Funeral Home, 110 Green Street, Hudson. Visitation will be from 10 a.m. to noon prior to funeral services. Interment will be in the Reformed Dutch Church Cemetery in Claverack. Visit www.batesanderson.com to leave condolences.

Born July 8, 1942 in Greenport, she was the daughter of the late Arthur Griffith and Belle Griffith Clark. From a young age, she was raised by Marcus and Evelyn Scutt.

She attended one of the last one-room schoolhouses in Glenco Mills from kindergarten through sixth grade, graduating from Ockawamick School in 1960. From the day she graduated high school, she never stopped working. First as an apple packer, then at WT Grant’s and at the first shopping center in Greenport in 1962. She retired from Columbia Memorial Hospital in 2006, after 37 dedicated years as a unit secretary. She loved to organize dinner parties, and Christmas Eve and New Year’s Eve celebrations for the entire hospital. She also enjoyed organizing co-worker parties, retired employee get-togethers, lunch and dinner with her husband, Charlie, along with friends, Jane, Edith, Pat, and Marge, most of these gatherings were at Kozel’s.

Mrs. Hudson enjoyed baking for Christ Church Episcopal luncheons. For more than 40 years, she baked Christmas cookies in February and shared them with family and friends. She was so blessed to have her close friends, Tanya (deceased), Joyce, Helen, Mary Ann, Paula, Terri and a very special friend, Connie who has been there for her through all the good and bad times.

For 58 years she was the beloved wife of her husband, Charles Hudson, who she loved with all her heart. She is survived by: her brothers, Arthur (Nancy) Griffith, Larry (Bel) and Scott (Donna) Clark, and her cousin, Marcus (Cindy) Scutt.

Visitation hours are Thursday, August 20 from 5 to 7 p.m. Funeral services are Friday, August 21 at 11 a.m. All services will be held at the Bates & Anderson-Redmond & Keeler Funeral Home, 110 Green Street, Hudson. Interment will be in Cedar Park Cemetery. In lieu of flowers, memorial contributions are encouraged to be made to Columbia-Greene Humane Society, AnimalKind, or the Make-a-Wish Foundation. 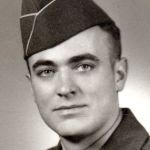 Born in Hudson, April 3, 1932, he was the son of the late Arline D. and W. Gordon Goold. He graduated from Chatham Central School, then served in the U.S. Army from 1952 to 1954. During that time he married his soulmate of 63 years, Ruth Helen Larson. After returning from his military service, he worked in the family well-drilling business, retiring as President of W. Gordon Wells & Pumps in 2013. He was a charter member of the Tri-Village Fire Company, and also a member of the Chatham Lions Club.

In his spare time, he and his wife, Ruth, would often stay at their camp near Gore Mountain, where the family gathered and enjoyed skiing at Gore. He was known for his famous pancakes prepared on the hot woodstove. He also took many fishing trips with his wife, another hobby he loved dearly, while she would patiently distract herself with a good book.

Calling hours are Friday, August 21, 2020 from 10 a.m. to noon at the French, Gifford, Preiter, and Blasl Funeral Home, 25 Railroad Avenue, Chatham. A graveside service will take place at 1 p.m. at the Chatham Center Cemetery.