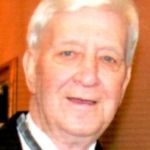 EAST GREENBUSH—Robert Joseph Decker, 90, of East Greenbush died Friday, September 11, 2020 after a brief illness at his home with his family.

Born in Hillsdale, he was the son of Oswald and Mary (Lorette) Decker.

“Bob” proudly served his country as a staff sergeant in Germany during Korean War.

He was a service manager at Hickey Ford in Troy before retiring and going to work as a bus driver for the East Greenbush central schools. Mr. Decker was a devoted family man and an avid Yankee fan.

He is also survived by many nieces and nephews.

Services will be private at the convenience of the family.

For further information and to send condolences visit www.wjrockefeller.com

Born March 12, 1941 in the Bronx, she was the daughter of the late Nicholas and Elsa (Wickeser) Zarlenga.

She was a homemaker and enjoyed cooking, gardening and animals. She was also a communicant of St. John the Baptist Church in Valatie.

She is survived by: her husband, John Moroch; a daughter, Laura Moroch of Beacon and a sister, Helen Caravello of Florida.

A Mass of Christian Burial will be held Wednesday, September 16, 2020, 11 a.m. at St. John the Baptist Church, Route 9, Valatie, with the Reverend George Fleming officiating. Calling hours will be Tuesday, September 15 from 5 to 7 p.m. at the Raymond E. Bond Funeral Home, 1015 Kinderhook Street (Route 9), Valatie. Memorial contributions may be made to the Columbia-Greene Humane Society, 111 Humane Society Road, Hudson 12534. To send condolences visit raymondbondfh.com.

MOORE, SC—Joanne M. Shook, 67, formerly of Hudson, passed away peacefully in her sleep at her home in Moore, South Carolina.

Born December 25, 1952 in Hudson, she was the daughter of John and Elizabeth (Doolittle) Hoffman.

She worked in the Human Resources Department at Hudson City Savings Institution for many years. She was a devoted and loving wife, mother and grandmother. Family was her top priority, and everyone who came into her life became part of her family. She was the consummate caregiver and peace maker.

Mrs. Shook loved her grandchildren, and especially enjoyed knitting and crocheting blankets for them. She was also a very generous supporter of St. Jude’s Children’s Research Hospital.

She is survived by: her husband, Lyle J. Shook, Jr.; her sons, Dwayne, Michael, Brian and Mathew Shook; 11 grandchildren; one great-granddaughter; her brother, John Hoffman and several nieces and nephews. In addition to her parents, she was predeceased by her son, Lyle J. Shook, III.

Funeral services at the Bates & Anderson-Redmond & Keeler Funeral Home, 110 Green Street, Hudson, will be held Wednesday, September 16 at 10 a.m. Visitation hours will be Tuesday, September 15 from 5 to 7 p.m. Interment will be in Cedar Park Cemetery. Memorial contributions may be made to St. Jude’s Children’s Research Hospital.