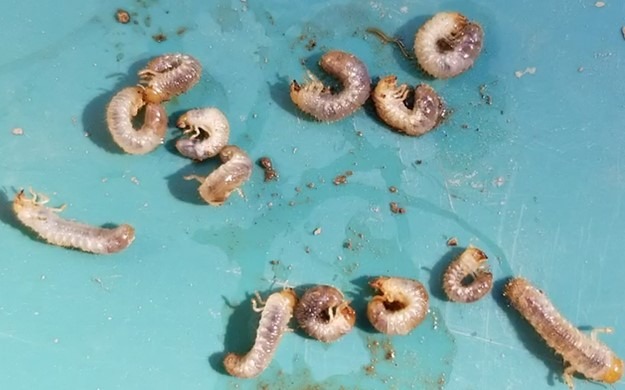 These grubs are larval stage of beetles common to this region and the writer’s lawn. Photo by David Chinery

ALL I WANTED was some new photos for my lawn talk, but I got a bit more than that. Since my pictures of looking in a lawn for grubs date back to the film era, I headed into the backyard with my digital camera to get some new-century shots. Scouting for grubs involves cutting out a one square foot section of turf, turning it over, and pawing through the soil in search of larvae. Due to the droughty summer and my weedy lawn, I wasn’t expecting much, but a grub soon appeared; then more, and still more. I stopped looking and counting after I had 13 Japanese beetle grubs writhing in a yogurt cup. While a few grubs are of little concern, over eight per square foot can cause serious damage. Lawns with high grub populations can turn to barren fields by spring. This excited my inner entomologist while nauseating the horticulturist.

If you’ve somehow gotten this far in life and don’t know grubs, here’s the scoop. Grubs are the larval stage of beetles, including Japanese beetles, Oriental beetles, and European chafers, the three most popular characters in the Capital District. The adult mom beetles lay eggs in August, which quickly hatch into grubs. The grubs are white, C-shaped, have six legs on the front end, and a brown head capsule. They voraciously devour the roots of grass plants. They survive winter underground, eat a little more in the spring, pupate, then emerge as the next generation of beetles in late June or early July.

Crafting an action plan for an October gaggle of grubs is a head scratcher. Beneficial nematodes, tiny eel-like creatures which can enter a grub and regurgitate a toxic bacteria, can provide good control in some instances, but are expensive and picky about their environmental conditions, making deployment a challenge. A new nematode, developed by Rutgers University and given the scientific moniker Steinernema scarabaei, promises to be larger, hungrier, and easier to use. Unfortunately, it is hard to find for sale, at least right now.

Another option, a “good guy” bacteria called Bacillus thuringiensis variety galleriae, which I’ll call Btg, has also recently come onto the lawn care scene. Once the Btg is injested by a grub, it produces a protein which causes the grub to starve to death. Btg controlled 70% or more of the grubs in trials at the Ohio State University, and it is sold under the name GrubGONE. Unfortunately, Btg is better used in August or early September.

That leaves us with lawn insecticides, with perhaps the only choice those labeled “fast-acting,” since most of the others move too slowly into the soil to grub-level. But if you abhor the chemical route, there is always the “do nothing” option. Right now, moles are dining on the grubs in my backyard, and they might be joined by birds or skunks. If it turns into a feeding frenzy, the lawn will look like a fraternity house on Sunday morning, and I’ll be re-seeding next spring.