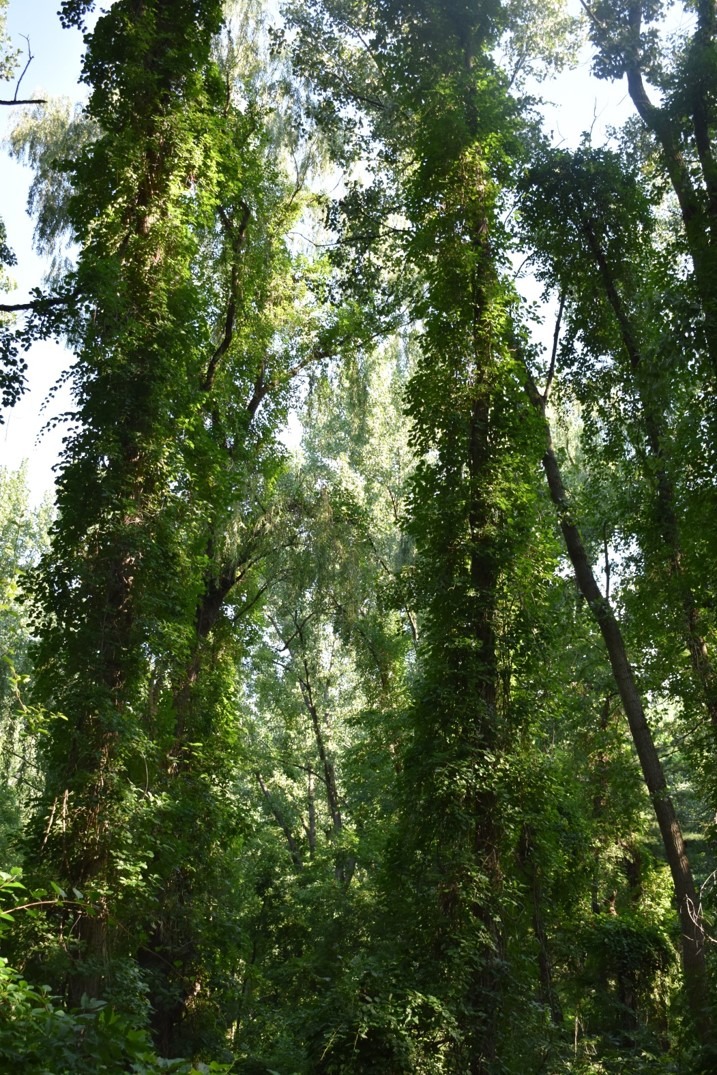 IMAGINE AN ORNAMENTAL PLANT which grows quickly, with no insect pests or fungal diseases. It produces highly attractive orange fruits in fall, perfect to pair with pumpkins and mums. It requires no watering or fertilizer, grows in any soil, and thrives in sun or shade. And best of all, deer don’t eat it! Did these positive qualities run through someone’s mind as they brought the first plants of oriental bittersweet to the United States in the 1860s? Certainly they couldn’t have foreseen that this plant would grow into the environment-changer we live with today.

Once you know oriental bittersweet, you’ll find it’s just about everywhere in our part of the Hudson Valley. It’s a vine that can climb 60 feet or more into the trees, sometimes pulling them down as it spreads. It grows on top of less aggressive vines, such as native Virginia creeper, smothering them, too. It also forms dense thickets, leaving no room for woody plants or wildflowers to survive or regenerate. It turns the landscape into a mass of indistinct, foliage-covered forms, making things look strange and degraded. Oriental bittersweet covers natural places, like Schodack Island State Park and Papscanee Island Preserve. Its abundant in cultivated landscapes too, often seen growing up chain link fences in the city and scaling spruces in the suburbs. I’m pulling up seedlings like crazy at my place, trying to hold a line in the shifting sand.

A known problem in more than 33 states and covering thousands of acres nationally, how did oriental bittersweet become such a success? A combination of traits make it bigger, faster and stronger than virtually anything in its path. There are both male and female plants, as well as plants that bear both male and female flowers. Abundant seeds are produced in fall, and these seeds are highly attractive to birds and small animals. Migrating birds may retain what they eat for more than a month, so bittersweet seeds consumed here may be deposited hundreds of miles away. Seeds germinate readily, grow quickly, and seedlings can produce flowers and seeds after just a year or two of growth.

Oriental bittersweet has hybridized with native American bittersweet to the point that scientists fear the native will become extinct. Vines touching the ground can root and spread further, and cut vines re-grow quickly. Climate models suggest that Oriental bittersweet is likely to benefit from warming temperatures and increasing precipitation in the Northeast, where it is predicted to increase and spread northward (watch out, Canada!).

And perhaps most cleverly, o.b.’s fall fruits are eye-candy to humans, who pick it, use it for their seasonal décor, then discard it in the backyard, aiding its march onward. Truly, this is a cockroach-bedbug-Norway rat of a plant.

So is there any hope? It seems unmanaged natural areas will be increasingly covered with oriental bittersweet indefinitely, making native woodlands invasive species ghettos. In your own backyard, pull, dig and remove it any way you can. Keep calm and garden on.