The 43rd District covers all of Columbia County, and well as parts of Rensselaer, Saratoga, and Washington Counties. State senators are elected for two years.

As of February 21 of this year there were 220,414 voters in the whole district, the majority of them in Rensselaer and Saratoga counties. Democrats hold a slight lead over Republicans district wide, but there are more than 15,000 registered Independence Party members in the district. Ms. Jordan has the endorsement of the Independence Party. But the largest bloc of voters after those in the two major parties is made up of eligible voters who have selected no party affiliation.

Each candidate was asked to fill out a Columbia Paper questionnaire. In edited form, their answers appear here. Senator Jordan, 60, is currently serving her first term in the state Senate. She is a registered Republican and has been endorsed by the Republican, Independence and Conservative parties.

Ms. Jordan lives in the Saratoga County Town of Halfmoon and was on the Halfmoon Town Board from 2014-2018. She was born in Pennsylvania and attended Lehigh University, where she received a bachelor of arts degree. She also attended Penn State Dickinson School of Law, receiving a juris doctorate degree. She is married to Phil Jordan and they have two grown sons, Lane and James.

The senator has been honored by the New York State Young Republicans with the “Walter Mahoney Senator of the Year Award.”

In a candidate statement, Senator Jordan wrote: “I’m seeking re-election to continue serving as your independent voice and deliver real results for Columbia County. I secured $200,000 for the PFC Joseph Dwyer Peer-to-Peer program to help Columbia County’s veterans and secured DOH approval for CMH to resume elective surgeries during Covid. I’m working with Copake to ensure their voice is heard regarding a 400-500-acre solar farm in their town. I was outspoken against Amtrak’s fence plan limiting pedestrian access and impacting local scenic beauty. I sponsored the Golden Gathering with my good friend Columbia County Clerk Holly Tanner and sponsored a Drive-Thru Flu Shot Clinic to keep Columbia County families healthy. Broadband remains a huge issue in Columbia County, which is why I’m pushing for broadband expansion and for Albany to finally honor its broken broadband promises. Working for a bi-partisan agenda of affordability, opportunity and security remain my focus, I’d be honored to receive your vote!”

For more information about Daphne Jordan’s campaign go to DaphneJordan.com 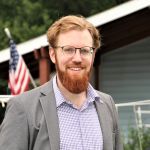 Mr. Nelson, 31, is a registered Democrat who has also been endorsed in his run for state Senate by the Working Families Party. He is currently a trustee for the Village of Stillwater. Mr. Nelson is also a member of the New York State Democratic Committee.

He is from Stillwater and has a bachelor of science in biochemistry and biophysics from Rensselaer Polytechnic Institute. Mr. Nelson co-founded two nano-biotechnology companies. He said in a candidate profile that he is a “scientist by training but a political organizer and public servant by trade.” He said he has worked on numerous political campaigns across the state, and served as a special projects coordinator for Assemblyman Phil Steck (D-Colonie). He is a founding member of the New York Progressive Action Network and co-founded the environmental advocacy organization North Country Climate Reality.

In his candidate statement he wrote, “As your state Senator, I will fight for an agenda that works for working families, use my experience as a biochemist and former entrepreneur to help combat the Covid-19 pandemic and its economic fallout, and actually get things done for our district. My opponent is the least productive senator our district has ever had. When I am elected, I will fight for guaranteed, comprehensive health care for every New Yorker; empower new and small businesses by eliminating unnecessary fines and creating a public payroll processing service to make hiring faster and cheaper; finally expand broadband access to our entire district by laying the cable ourselves instead of relying on grants and incentives; and make sure we don’t balance our state budget on the backs of working families. It’s time we all had the productive representation we deserve.”

For more information on Patrick Nelson’s campaign, go to NelsonForNY.com