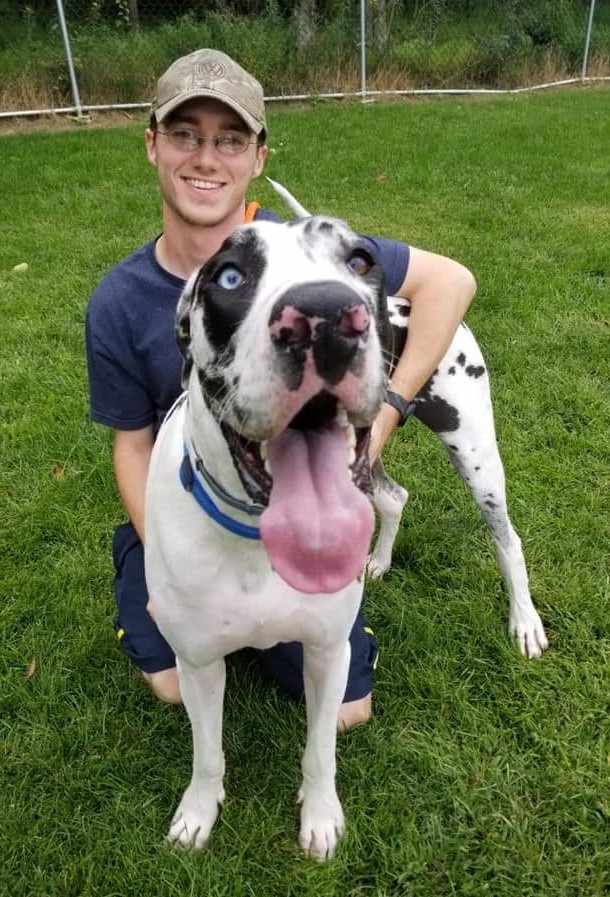 Copake’s new animal control officer Kyle Miller (l) is pictured with his pal, Lenny the Great Dane, who is an occasional boarder at the Humane Society. Photo contributed

COPAKE—Sometimes dogs help find lost people, so it seems only right that there is a person out there dedicated to helping lost dogs find their way home.

His name is Kyle Miller and this 27-year-old, originally from Ancram and now a Copake resident, is the town’s newest animal control officer. He also performs that service for the towns of Austerlitz, Ghent, Hillsdale and Taghkanic.

“Kyle is a wonderful, super dog control officer,” Copake Supervisor Jeanne Mettler announced at the November 12 Town Board meeting as a segue into a discussion about which dog shelter the town should use in the coming year.

The town currently contracts with the Pine Plains Veterinary Hospital with hours of operation from 7:30 a.m. to 6 p.m. on weekdays and 7:30 a.m. to 3 p.m. on Saturdays, according to the website pineplainsvet.com.

The issue is that if Mr. Miller finds a dog when the kennel is closed, he cannot take the dog there and must keep it at his home or somewhere else until the kennel is open. But he has no facilities for housing animals.

So Ms. Mettler asked the board to consider changing the shelter the town uses to the Columbia-Greene Humane Society/SPCA in Claverack, where Mr. Miller has worked full-time as a kennel technician for three years, and has 24/7 access to take a lost animal for shelter.

The Humane Society charges $35/day to shelter a lost dog, so after 10 days the cost is $350. If the dog’s owner comes to get the dog before that time, he or she pays the bill. If the owner does not come, then the town has to foot the bill plus an additional $300 shelter charge to prepare the dog for adoption. In Pine Plains, the charge is $22/day. While there is clearly a difference in cost, Ms. Mettler said, Copake is not a place where a lot of strays are found and there is a benefit in having a safe place to take a lost dog at anytime. She pointed out that Mr. Miller “knows the ins and outs” of the Humane Society and that he has a 100% success rate for finding the owners of lost dogs in Copake.

Since he started in Copake, he has dealt with a half dozen lost dogs and has been able to get each one back to its relieved owners.

As soon as he finds a dog, or someone else finds a dog and calls him, he gets the word out on social media. He puts the animal’s photo and particulars on his own Facebook page, the town website, along with the Facebook pages of Lost and Found Pets: of Columbia County, Columbia-Greene and the Hudson Valley and occasionally contacts NEWS10’s Chief Meteorologist Steve Caporizzo (“Mr. Pet Connection”) who puts it up on his “fan page.”

He also carries with him a handheld device that scans animals for microchips, purchased for him by the Town of Ghent. He said about 25% of dogs have micro-chips and most lost dogs turn up wearing a collar with no contact information on it. “Lost dogs usually come to us,” he said. “They don’t want to be out there running. They are looking for help.”

Finding the owner is mostly about “putting the word out and knowing who to contact,” he said.

Mr. Miller said he spent three weeks tracking the dog, which finally popped up 50 miles away in Torrington, CT. That’s a long distance for a dog to travel. “There’s just no explanation,” he said.

It’s not just dogs and cats that stray, he said. He was involved with trying to catch a parakeet spotted eating at someone’s bird feeder—hanging around with a wild crowd.

The idea was to place a bird cage near the feeder complete with tasty seeds inside and hope that the parakeet would enter the familiar-looking structure. Mr. Miller said most pet birds are banded so it may have been easy to find the owner, except that this free bird was having nothing to do the cage. No one had reported missing a bird, he said, and it’s probably still out there.

Sometimes he gets calls about wildlife, like bears. He refers those calls to the Department of Environmental Conservation, it’s mostly about education, he said.

Someone in Copake Falls called him about a rattlesnake on their front porch. He turned that one over to a conservation officer. He was also notified about three lost goats in the Copake Falls-Hillsdale area.

He investigated a case involving a wandering peacock, which showed up at a house in Ghent and seemed to be quite fond of looking at its reflection in the home’s windows. He was able to reunite the bird and its owners through Facebook the next day.

Asked how he got in this business, Mr. Miller said he has always had a passion for animals and the outdoors and went to school for wildlife management. He finds his job rewarding. If he can, he wants to spare animals from being separated from their homes and put up for adoption. He figures he can save them that step by helping them find their owners.

As for the Copake Town Board, members voted in favor of switching to the Humane Society as the town’s animal shelter. Councilperson Terry Sullivan noted, “Kyle is great… Copake is lucky to have him.”