COPAKE—A new year is coming and so is a new look for the interior of Town Hall.

At the December 10 Town Board meeting via Zoom, Peter N. Fritsch, a member of a newly-appointed committee, gave a PowerPoint presentation about suggested ways of using the wall space in Town Hall hallways, offices and the main meeting room to tell the story of the five hamlets in the Town of Copake.

The committee, whose members are Mr. Fritsch, a graphic designer and artist; Copake Town Historian Howard Blue and longtime former Copake Town Clerk/Tax Collector and current Deputy Town Clerk/Tax Collector Vana Hotaling, has been working on coming up with decorative ideas over the past several months when the Town Hall hasn’t been closed and they could get in to look around.

Mr. Fritsch said the current appearance of the Town Hall interior has taken a long time to evolve. There are many paintings, documents, photographs and plaques of all sizes and subject matters displayed in no particular order.

Mr. Fritsch said the committee’s vision for the new look involves focus, communication and continuity. He said the focus should be on the collective history of the town’s five hamlets: Copake, Copake Falls, West Copake, Craryville and Copake Lake as told through thousands of historical photographs available from the Roeliff Jansen Historical Society and other sources.

Mr. Fritsch said there should be “uniformity of presentation” and the images should be assembled in such a way as to tell the story of each hamlet’s history. One slide in the presentation says, “A town is defined by the collective history of its citizens and the lives lived there.”

Mr. Fritsch proposes to display all this history in 18 by 24-inch “themed panels” each containing several images and descriptive text on one related subject. The panels will be designed by the committee, then reproduced on canvas by CanvasPop, a highly-rated print-on-canvas company.

Each panel will cost $45 to $50. The committee plans to create 50 to 60 such panels and place them by subject throughout Copake Town Hall.

Total cost for reproducing all panels for installation is between $4,000 and $4,500. 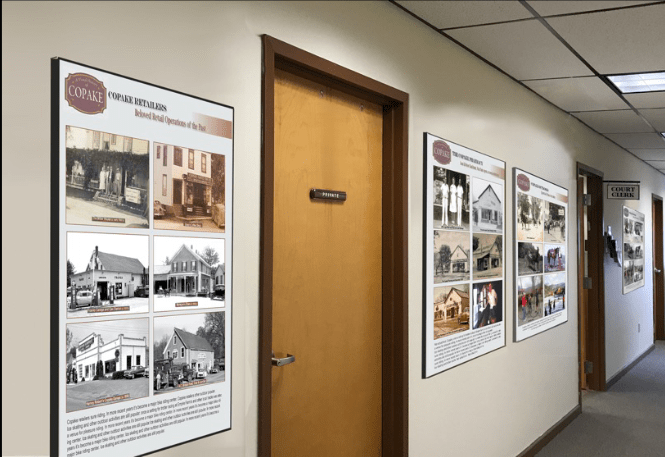 This is how the new display panels will look hanging in the Town Hall hallways. Photo contributed

Bob Callahan, the town’s master-of-all-trades, will paint the Town Hall walls and lend his expertise to the installation of the exhibition.

Images displayed will include historic photos of people and places, along with vintage postcards, some of Mr. Fritsch’s paintings of Copake and some of the existing items already on display. Other items will be returned to the donors with the thanks of the town for allowing the public to view them for these many years.

Mr. Fritsch also suggested the historic bell in the corner of the meeting room could be displayed more prominently. He said some Indian arrowheads uncovered during an archaeological research dig, an original railroad spike from the tracks near the Craryville railroad station, and a commemorative illustrated plate, as well as various Copake artifacts in a private collections may also be framed and displayed in the future.

Grant money might also be available to help pay for the project.

The committee plans to have the redecoration completed by the summer of 2021 in hopes the Town Hall, which is currently closed except by appointment due to Covid-19, will then be open again so the public can browse and marvel at Copake’s history when they come in to get a building permit, a fishing license or buy transfer station garbage bags.